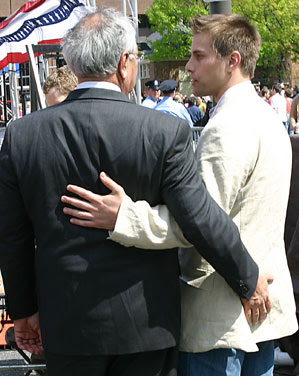 It screams for an outpouring of snark. My nutria senses are exploding at it. I am evolving marmot-like into a furry, buck-toothed gargantuan not because of global warming or oil in Barataria Bay (note: let’s not run tug boats into wellheads next time, OK people?), but because of this.

But I won’t. In the interest of inclusion, I’m going to let the readers take a whack at it. Come with me below the jump and I’ll tell you what your assignment is.

And here we go.

It seems that Barney Frank got himself some unwanted publicity for making a scene at a tollbooth last Friday in order to get a $1 ferry discount (that’s a FERRY discount, and stop your snickering) because he’s a senior citizen. And why did he want to catch the ferry? (He was trying to catch a FERRY, you idiots. Stop laughing. What’d you think I said?) The New York Post explains the whole thing:

Massachusetts Congressman Barney Frank caused a scene when he demanded a $1 senior discount on his ferry fare to Fire Island’s popular gay haunt, The Pines, last Friday. Frank was turned down by ticket clerks at the dock in Sayville because he didn’t have the required Suffolk County Senior Citizens ID. A witness reports, “Frank made such a drama over the senior rate that I contemplated offering him the dollar to cool down the situation.” Frank made news last year when he was spotted looking uncomfortable around a bevy of topless, well-built men at the Pines Annual Ascension Beach Party. Frank’s spokesperson confirmed to Page Six that his partner, James Ready, asked the ticket office for a regular ticket for himself and a senior ticket for Frank, “but was turned down because Frank didn’t have a resident ID.”

In other words, only local ferry-riders are eligible for the discount. You gotta have an ID which says you’re old and local and that you want to ride the ferry (They keep laughing. Why are they laughing?), and Frank didn’t have that. He’s old, sure, and he DEFINITELY wanted to ride the ferry (There they go again…), but since he’s not from Suffolk County he got treated like all the other ferry-riders (OK, dammit, that’s ENOUGH. Like a bunch of hyenas around here, for the love of Pete.

And apparently, there’s a specific cultural event of sorts that Frank wanted to attend on the other end of that boat ride.

Your assignment is – first, please stop that giggling – to give us the best smartass you’ve got. We’ve supplied you with more than enough material to get started.

Consider this an open thread.