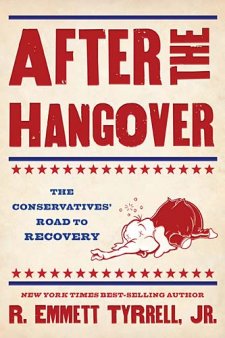 Other readings in this series…

The Overton Window, by Glenn Beck
The Obama Diaries, by Laura Ingraham
Nullification, by Tom Woods

This is the part where I admit I’ve been a dork for a very long time. I was probably the only college kid at LSU to have a paid subscription to the American Spectator in the early 1990’s, and I read every word of that sucker. Now that the internet has made print obsolete, I’m on that site daily.

As such, it’s anything but a surprise that I’m going to say nice things about a book Bob Tyrrell wrote. The guy isn’t a good writer; he’s a great writer. If you like highbrow smartassery, you will find no better purveyor of it than Tyrrell.

And in After The Hangover: The Conservatives’ Road To Recovery, we get Tyrrell in top form. The book, released in April, is an examination of the state of conservatism in the aftermath of the 2008 disasters as it rebounds. It’s a sober, yet cheerful account of the conservative movement’s elevation from a personal crusade of William F. Buckley, of whom Tyrrell was a protege of sorts, to what is now a mass movement fueled by New Media, cable news and talk radio which carries the bulk of the intelligent political thought in the country (the blathering of the faux-elites notwithstanding).

Tyrrell’s history of conservatism notes, for those who aren’t aware, that its modern form hardly even existed until the 1950’s. At the time there was virtually no difference between the two political parties – Eisenhower Republicans were as invested in the welfare state as New Deal Democrats. The Right at the time was preoccupied with fighting communism, an endeavor in which they had ample support in the Democrat Party. Confiscatory taxation of the rich was understood as perfectly acceptable economic policy until a paragon of liberalism, John F. Kennedy, came along and slashed the tax rates – engendering a decade-long economic boom which didn’t die until Nixon’s economic mismanagement strangled it.

As Tyrrell explains, what Buckley brought about was something that didn’t exist when he first came on the scene in the early 1950’s. And his celebrity helped drive the construction of a movement which was fueled by such thinkers as Russell Kirk and Frank Meyer, who joined with Buckley in the creation of National Review. From there came the establishment of think tanks like the Manhattan Institute and the Heritage Foundation, and the movement then galvanized into practical politics – first with the failed presidential candidacy of Barry Goldwater, who was ahead of his time, and then the revolutionary era of Ronald Reagan.

So Tyrrell’s understanding of the history of the movement, and his perspective on its current situation, is fairly complete. That’s why he’s able to authoritatively articulate such a delightful passage as this in describing the depths of despair among conservatives following Obama’s election:

Faced with death or the wilderness years, I opted for the great outdoors. Right after the election, at the American Spectator’s Robert L. Bartley Dinner, annually given for our writers and supporters, I urged that we had best prepare for the wilderness. To help my friends survive, my staff distributed four hundred copies of the L.L. Bean catalog. Admittedly, the L.L. Bean company was suspicious when the Spectator ordered them for an annual dinner having more to do with politics than with fishing, hiking or bird-watching.

The famous catalog features sportswear and outdoor accoutrements for every circumstance. Winston Churchill, during his wilderness years, was comforted by cases of Pol Roger and fistfuls of Havanas. Unfortunately, nowadays champagne is very pricey and smoking is malum prohibitum almost everywhere. Even in the great outdoors, a lit cigar could be highly controversial. So I urged my friends to settle for the offerings made available in the Bean catalog. Properly attired, we might not find the wilderness so bad. Sure, there would be poison ivy and wolves, clouds of mosquitoes and grimfaced members of the World Wildlife Foundation stomping around on the mountain laurel, but there would be many instances of natural beauty. Once in the wilderness, I planned to pitch my tent close to that of the comely Governor Palin. She is very cute and can handle a shootin’ iron. Moreover I heard tell that she has an excellent recipe for sauteed elk and would probably drive out in her Hummer. That hardy vehicle might prove useful. Assuming that the governing Liberals would about to perform as recklessly as in the past, we conservatives would probably be clearing out of the wilds in a hurry and heading back to the campaign trail. As it turned out, conservatism’s wilderness years lasted only a few months, and I never did get an opportunity to taste Palin’s sauteed elk.

The book is covered with such examples of delightful prose.

It’s also covered with signature formulations. For example, Tyrrell describes the unfortunate spectacle of “pet” conservatives in the legacy media – Ross Douthat, David Brooks, David Frum, Tucker Carlson, who he describes as “Reformed Conservatives” – as “crabs in a bucket.” He notes that such creatures tend to expend much energy in attempting to climb over one another to exit the receptacle, which is not unlike the savagery one sees among many “conservative” pundits who find employment at the New York Times or CNN as a result of taking an axe to their ideological fellows. Of Brooks and Frum, Tyrrell is especially dismissive, calling them the Davidian Branch of the conservative movement.

“Throughout the decades, there has been only one Liberal principle that the Liberals have agreed on without fluctuation. That is their solemn belief that it is fundamental to the progress of our nation that Liberals disturb the peach…Liberalism is the world’s only nontotalitarian political movement founded on a petty crime.”

The book’s premise is that conservatism has built up a huge infrastructure since its origins with Buckley at Yale, and despite the doomsaying from self-serving Liberals (he makes a point to use an obnoxious capital L to describe left-leaners, as he agrees with me there is little true liberalism in their policies) and climbing conservative crabs it isn’t dead or dying. Tyrrell notes the poisonous and pervasive nature of the left-wing legacy media, which he calls the Kultursmog, but predicts that with the alternatives currently populating the landscape it will be more and more difficult for the Left to set the narrative on the issues of the day.

And finally, he offers some suggestions for conservatives going forward into political power. Among them, capping federal budgets at no more than 20 percent of GDP (or taxation at more than 18.5 percent), a flat tax along the lines Steve Forbes laid out in 2005, private Social Security accounts for younger Americans, market-based health reforms, smart immigration strategy, a free-market educational system, a renewed commitment to national security and a robust domestic energy strategy.

But most of all, After The Hangover is an exercise in rejuvenating the conservative movement through humor and perspective. In that mission it succeeds. Despite Tyrrell’s often ornate vocabulary, it’s an easy read and a good laugh – something we can all use these days.

“I learned a valuable lesson on this veto override. When you give your word, you got to stay with your word. Don’t give your word if you don’t mean it. I’ve hated my veto override vote every day since I’ve taken it.” - Louisiana Rep. Roy Daryl Adams, who flipped his vote on the Fairness In Women's Sports Act last week.
More Quotes