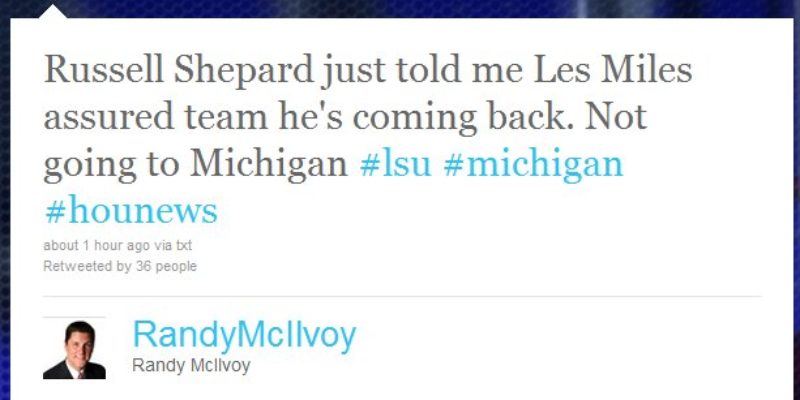 Now that LSU has wiped out the Aggies in the Cotton Bowl, the big news story this weekend is going to be whether head coach Les Miles is going to Michigan, who will very likely be approaching him about the open job there this weekend or early next week. Along those lines, there appears to be evidence that Miles has told the Tiger team he’s staying. 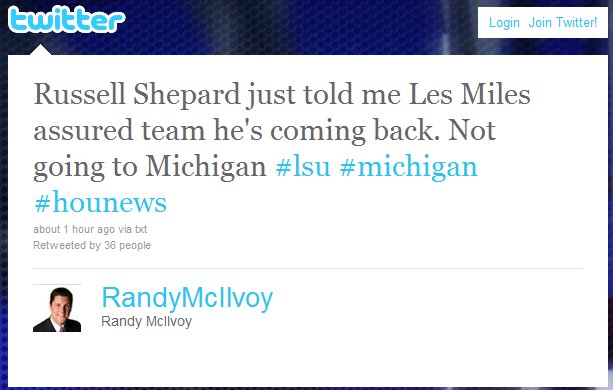 This one’s believable, we’re going to say, because McIlvoy has been at that station since 2004 and covered Shepard when the latter was a big-time high school prospect. He’s got a relationship with Shepard. So if he’s getting that from the sophomore wide receiver, it’s a reasonable certainty that it’s legitimate – at least from Shepard’s perception.

Shepard’s quote is supported by another one from quarterback Jordan Jefferson, who was quoted in an AP article also saying Miles told the team he was staying.

When asked immediately after the game if he’d be back next season, there was an extended pause before Miles responded, “It’s a wonderful place. I love it here.” He said he has not be contacted by his alma mater.

Amid the uncertainty of Miles’ future, Jordan Jefferson threw three touchdown passes to Terrence Toliver and ran for a score to help the 11th-ranked Tigers rally for a 41-24 victory over No. 18 Texas A&M in the 75th Cotton Bowl on Friday night.

“We trust Les Miles and we trust his word,” Jefferson said. “His word was he’s not going anywhere and he’ll be our coach next year.”

If Miles would be leaving to go to Michigan, therefore – something WJBO in Baton Rouge is reporting with no named sources and questionable credibility on the part of the reporters – he’d be doing so while lying to an entire team full of players he recruited. Reports like that were buoyed by news that a plane sometimes used by University of Michigan officials spent time in Baton Rouge late this week (when Miles was already in Dallas with the LSU team) before traveling to Savannah, Georgia.

It’s possible that Miles bamboozled his players, but unlikely.

We don’t see Miles leaving LSU to go to Michigan, for the simple reason that for the next two seasons there is no team in college football better poised to win a national championship than LSU. The Tigers have more premier-quality athletes with more eligibility left than any team in the country, they have a returning senior quarterback coming off perhaps his best game who will be hard-pressed to hold off an incoming junior-college star, they uncovered a future high-round NFL draft pick at tailback in Spencer Ware tonight, they return six offensive linemen with starting experience and they’ve got a defense loaded with young talent across the board. And Miles is putting the finishing touches on yet another frighteningly-good recruiting class made up chiefly of Louisiana talent.

At Michigan, he’d be taking the same $4 million salary – or more – that he takes at LSU, at a university unaccustomed to that kind of outlay for a coach and a culture highly antagonistic to flashy salaries. For that level of pay, the fan base would expect an immediate return to past glory days of conference and national championships that the current roster outside of quarterback Denard Robinson is incapable of producing. The Wolverines were 7-6 this year and were exposed in their bowl game as incapable of staying on the field with even a mid-level SEC team in Mississippi State, meaning a bowl victory necessary for a high national ranking, much less a national championship, is beyond Michigan’s reach. That’s an indication that it will probably take more than two years to put that program on a championship footing when by staying in Baton Rouge Miles has a team already built to win the whole enchilada for the next two seasons. Michigan fans chafing at 8-5-type records the next two years while Miles’ successor at LSU competes for national titles with a team he built here are going to drive him crazy.

And because Michigan is Miles’ alma mater, that kind of criticism is not the same as the heat he takes at LSU from time to time. It’s one thing when you catch hell from the fans at a place which hired you. It’s another thing entirely when you take heat at your alma mater.

In short, LSU is a lot better job than Michigan is in January of 2011. And while Miles might have affinity to Ann Arbor, he’s smart enough to realize it. It’s possible that the pull of his heartstrings might overcome such analysis, but we don’t see it.

Michigan has another prominent alumnus available in Brady Hoke, who has engineered spectacular turnarounds at Ball State (from 4-8 in 2003 to 12-1 in 2008) and San Diego State (from 4-8 in 2009 to 9-4 this past season) in an eight-year career as a head coach. Hoke is a more likely hire than Miles is for the Wolverines.