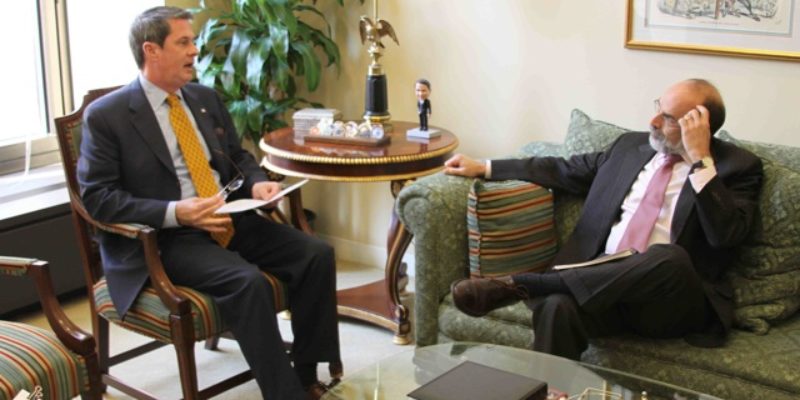 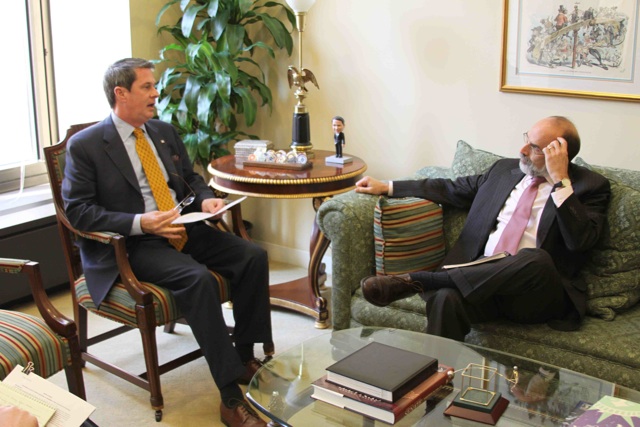 After Sen. David Vitter placed a hold on the nomination of Dan Ashe, President Obama’s nominee to head the U.S. Fish and Wildlife Service under the Department of the Interior, yesterday – the second such nomination hold Vitter had placed, as he had also placed a hold on NOAA chief scientist nominee Scott Doney’s appointment back in November – one would have thought the White House would get the message and begin to take the Senator seriously about his demands that the administration begin restoring the Gulf offshore oil business to some sense of normality.

Vitter did get a meeting today with Bureau of Ocean Energy Management, Regulation and Enforcement head Michael Bromwich. But the outcome indicates the Senator is going to need to find more ways to make life miserable for Obama if he wants to get offshore oil permits moving again.

The meeting did make for an interesting press release, if nothing else.

“I wish my meeting with Director Bromwich was more fruitful.  Unfortunately, pretty much all he did was repeat the administration’s talking point that there is no de facto drilling moratorium in the Gulf,” Vitter’s release quoted him as saying.

“He also said some things that would make most Louisianians’ heads spin.  For example, on top of continuing to claim there is no de facto moratorium, the director told me that it was ‘not his job to issue permits.’  That’s news to most energy-related businesses as well as the thousands of Louisiana employees affected by his agency’s lack of permit approval.

“And the most distressing statement made by Director Bromwich was his claim that there are ‘only six applications for deepwater permits.’  Why?  Because Director Bromwich’s agency won’t accept and approve new exploration plans from companies, a requirement before the companies can file new permit applications,” said Vitter.

Vitter was also terribly put out by Bromwich’s ignorance about the lawsuit filed by Century Exploration, a drilling outfit based out of New Orleans, against the Department of Interior on the grounds that the refusal to issue permits to leaseholders for drilling constitutes a breach of contract.

But Hayride sources say that Vitter wasn’t the only one upset. Apparently Bromwich carried word from his boss, Interior Secretary Ken Salazar (who is in contempt of federal court in New Orleans for his actions in stopping drilling permits), that the Senator’s behavior in gumming up the personnel moves at Interior is unacceptable to them. Little surprise, then, that the meeting got off on the wrong foot and stayed that way.

Strangely, however, Bromwich’s frustration led him into the realm of mendacity. His claim that it’s not his job to issue permits is at contretemps with what his agency’s web site says…

BOEMRE is the federal agency responsible for overseeing the safe and environmentally responsible development of energy and mineral resources on the Outer Continental Shelf.

The BOEMRE’s Offshore Energy & Minerals Management (OEMM) offices contend with all aspects of offshore federal leasing and renewable energy projects.  The OEMM’s work includes the preparation and administration of regular offshore oil and gas lease sales. Additionally, we are responsible for conducting supporting research and documentation leading up to each lease sale. Our needs are many and varied from engineers, marine biologists, geologists, geophysicists, social scientists, environmental specialists, petroleum engineers, program analysts, statisticians and economists to name just a few.

Perhaps Bromwich meant that it was his employees who issue permits. Or perhaps he was playing lawyer a little, since BOEMRE’s mission statement talks more about leasing and development than actual permitting – with the obvious fact that no one would take out a mineral lease or undergo activities aimed at resource development without getting a permit to do so.

This is why people hate lawyers, and it’s also why people don’t particularly care for government bureaucrats either. But Bromwich’s unserious attitude about his agency and his job underlies the Obama administration’s commitment to destroy the offshore oil industry; if he was under orders to do what it takes to get the industry back on its feet he would be eager to sit down with Vitter and tell him exactly what BOEMRE needs to get things ramped up.

Instead, Vitter got the high hat.

The moratorium was illegal. A federal judge established that and was upheld on appeal. It was brought into being through fraud. Its effects have been spun both by the administration and those friendly to it. And there is still absolutely no humility or even accountability by the principals involved in governing offshore oil – despite the fact that their actions just killed a major offshore operator last week.

No end in sight. Vitter had that made clear to him today.