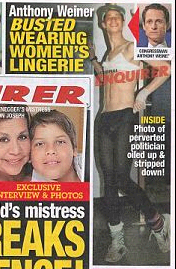 Oscar picked up the stuff about Anthony Weiner’s college crossdressing pictures, which made it to the National Enquirer (they usually end up as the highest bidder for stuff like this).

Now they’re out. And Weiner’s wife – and that marriage is as weird as he is given that she’s apparently a Muslim of Saudi descent and he’s Jewish, and how many Muslim-Jewish mixed couples do you know? – is back from traveling the world with her boss Hillary Clinton. Weiner said he wouldn’t resign from Congress until he could talk face to face with her – in other words she’s now wearing the pants in that family and he’s wearing…something else.

So this saga looks like it’s about to come to an end, one way or another.

The pictures the Enquirer has of Weiner are from 1982, when he was 18 years old. The UK Daily Mail has the full writeup on all this…

In another photo an oiled Weiner poses in y-fronted swimming trunks in front of a Christmas tree.

The pictures, taken by a college friend in 1982 when he was 18, demonstrate Weiner’s reputation at the State University of Plattsburgh as a flamboyant figure.

Speaking to the Enquirer, the friend said: ‘The cross dressing photos were taken during a holiday activity in Anthony’s college dorm when he was just a sophomore.

They were taken during the school’s traditional secret Santa event.

‘It was never quite clear whether one of Anthony’s challenges was to become a cross-dresser or if it was just some bizarre stunt he decided to do on his own.

‘The secret Santa was a three night event, and on another evening, Anthony showed up wearing skin tight swim briefs.

‘He was a very odd guy who went out of his way to do things purely for the shock value.’

That last line pretty much says it all – because it describes the personality type all too common among our political class. Normal people usually are not interested in running for office, because the media attention you get put through if you run for an office worth having is a nightmare. And because of that, the politics business is disproportionately populated with shameless attention whores just like Weiner, who has been a shameless attention whore his whole life.

And this is why small-government conservatism really is the only sane choice. It’s why the Weiner horror show matters.

The last thing we want in this country is to be governed by a whole class of slimeballs like Weiner. But that’s pretty much what we’ve got, and the Weiners are expanding their power exponentially right in front of our eyes.

There’s Tim Geithner, who couldn’t be bothered to pay his taxes.

There’s Rahm Emanuel, who accosted people in the showers at the Congressional gym.

There’s Peter Orszag, who knocked women up and dumped them.

There’s Kevin Jennings, the “safe schools czar,” and his strange affinity for pedophiles.

John Adams saw the danger of this stuff when he issued his famous quote: , “We have no government armed with power capable of contending with human passions unbridled by morality and religion. Avarice, ambition, revenge or gallantry would break the strongest cords of our Constitution as a whale goes through a net. Our Constitution was made only for a moral and religious people. It is wholly inadequate to the government of any other.”

Adams knew crappy people would destroy the Republic. He’d take one look at the Weiner fiasco and consider himself vindicated. And then he – and particularly his contemporaries Thomas Jefferson and James Madison, with whom he often disagreed – would say we’ve given the Weiners entirely too much power with too little attention paid to their character.

Of course, we’re told Weiner’s disgrace is a “distraction” from the important issues of the day. It’s not a distraction at all. And this business that Weiner is “sick,” and “needs help,” is bilge borne of a therapeutic culture which refuses to recognize that what afflicts Weiner isn’t psychosis but bad character, made worse by the arrogance of power. This wasn’t a surprise, either – his boorish and combative public conduct prior to his ruin practically screamed that he was eventually going to be subject to scandal.

And with the Weiner scandal breaking open, naturally the comparisons to David Vitter and his refusal to resign have tumbled out as a partisan defense of the pattern of Democrats sticking around despite disgrace. Frankly, if Weiner doesn’t want to resign I’m fine with that. He has use as a cautionary tale to all on Capitol Hill what happens when bad character isn’t held in check. Vitter has, I think, learned the lesson that his character flaws can kill his career – and Vitter’s politics generally tend toward devolving power out of Washington and toward the individual so that his bad behavior is of less import to the average citizen.

And that’s a major difference between the two. As I said above, given the current state of our media/political culture you’re not going to get enough good people to run for office to comply with Adams’ admonition – and because of that our only hope to avoid the ruin a government-by-degenerates (the Greeks called this a kakistocracy; you can look that one up) will give us is to impose strict limits on what Washington can do.

This is why we can survive a Vitter. But give us too many Weiners, and we’re done for.