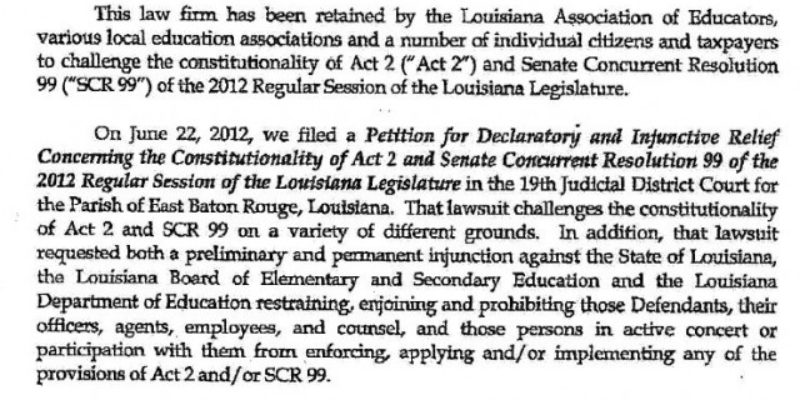 In a move which is somewhat understandable on one level and mind-numbingly stupid on another, The Hayride has learned that the Louisiana Association of Educators is sending demand letters to private schools participating in the Student Scholarships for Educational Excellence program, the state voucher plan, insisting that those schools pull out of the program.

We’ve obtained a copy of one of these letters. The full copy can be found here.

From the letter, an explanation of why the schools are being threatened… 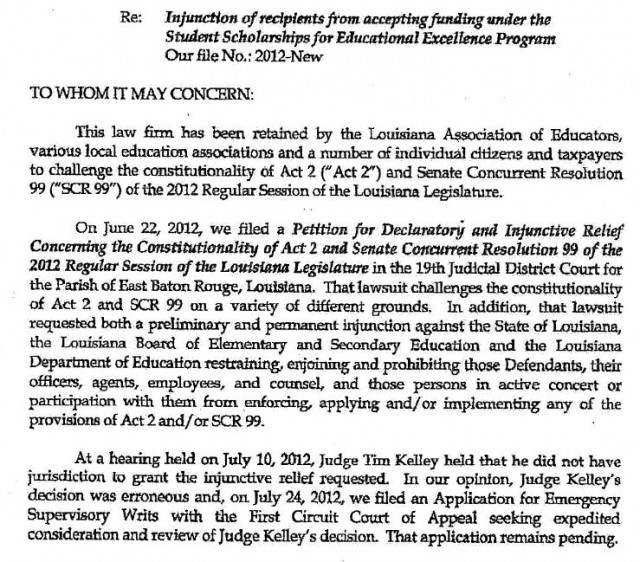 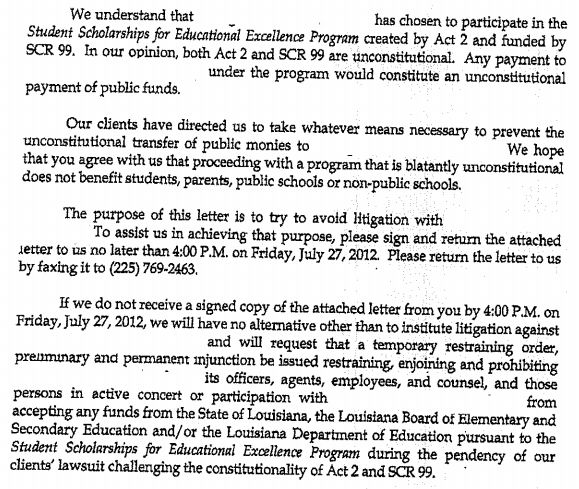 This, obviously, is fairly incendiary stuff.

From a legal standpoint it’s understandable. The teachers’ unions are trying to beat the voucher plan with a lawsuit after failing to beat it in the legislative process, so it makes sense to sue the participants in the program along with the state.

Sue everybody. Because in doing so, you might get some people who decide to vacate the field and it works a bit like the injunction Judge Kelley wouldn’t give them. These are small private schools, after all, and most of them are not going to have the resources to fight a protracted, high-profile lawsuit against, essentially, the AFL-CIO. Letters like this might have a pretty good shot at picking off a few stragglers.

They even include a boilerplate “sign here and we’ll leave you alone” form addressed to Education Superintendent John White. 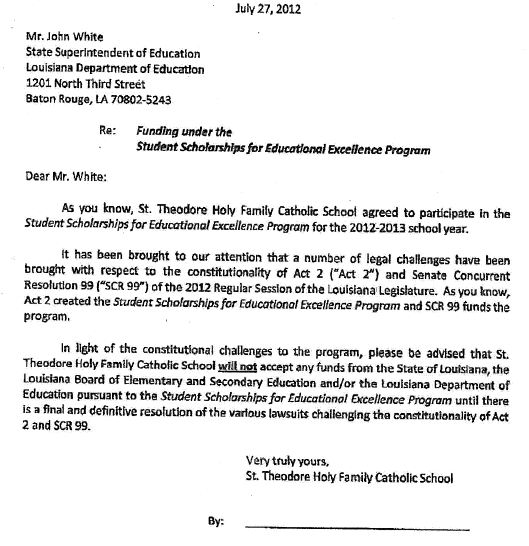 From a PR standpoint? This has to be the most ham-handed, unsympathetic action anyone could conceive of.

What the LAE, through their lawyer (in this case it appears they’re using a guy named Brian Blackwell out of Baton Rouge, and based on the letter we received saying “To Whom It May Concern” Blackwell might be sending all these letters), is saying is that they don’t want kids to get a chance to go to private schools and they’re willing to sue private citizens for making arrangements to educate those kids whose parents have rejected union schools.

Thuggery is a good word to describe this. It’s hard to imagine how the teachers’ unions expected this to play once word got out. It’s inconceivable that this would turn public opinion to their side. Playing the heavy against a bunch of little guys and parents trying to get better education for kids is what you generally DON’T do if you’re trying to win a public-policy fight – in court or elsewhere.

Eric Lewis, head of the Louisiana Black Alliance for Educational Options, was incensed about the letters. “The threat of legal action against participating schools in the scholarship program have got to be the most disgusting ploy yet,” he said this morning upon hearing of this latest gambit.

UPDATE: More reaction. The Pelican Institute picked up this quote from Clint Bolick of the Goldwater Institute, a lawyer who represents the side of school choice advocates across the country…

“In over two decades of school choice advocacy, I’ve never seen thuggery of this magnitude. What the unions can’t accomplish in the courtroom, they’re trying to achieve through bullying schools whose only offense is offering educational opportunities to children who need them.”

UPDATE #2: Now, the American Federation for Children has jumped into the fray…

The American Federation for Children—the nation’s voice for school choice—today condemned the actions of the Louisiana Association of Educators (LAE), after counsel for the teachers union yesterday sent threatening letters to schools participating in Louisiana’s statewide voucher program, urging them to drop out of the program or face a lawsuit from the union.

The letter comes despite a judge’s ruling two weeks ago that dismissed a union attempt to get an injunction stopping the program.

In the letter, which was faxed to participating voucher schools yesterday evening, a law firm retained by the LAE union threatens to initiate litigation against individual schools if they do not pledge—in writing—by 4 p.m. local time tomorrow to cease participation in the Student Scholarships for Educational Excellence (SSEE) program.

Kevin P. Chavous, a senior advisor to the Federation, denounced the bullying tactics as a remarkably cruel attempt to block children from attending the schools their parents have chosen for them.

“It’s despicable that adults would use the threat of legal action to stop schools from accepting students who desperately want a better education, thereby squashing their dreams and those of their parents,” Chavous said. “Even by standards of the typical special interest bullying tactics, this is an unbelievably demeaning and insulting action that aims ultimately to hurt the futures of thousands of children.”

The threatening letters to schools on behalf of LAE are in contrast with the strong demand for the program. LAE’s actions came just a day after the Department of Education announced the extension of 5,637 scholarship offers to students to participate in the program this fall—just a portion of the 10,300 applications the Department received—illustrating that any attempts to stop schools from participating in the program are at odds with the demand from parents.

Of the initial scholarship offers, 84 percent of students in first through 12th grade attended a school rated “D” or “F” by the state last year.

An accountability proposal from the department was also approved by the Louisiana Board of Elementary and Secondary Education (BESE) on Tuesday, further strengthening the program prior to yesterday’s bullying letters.

Chavous, a former D.C. City Council member who has also worked for years to reform education in Louisiana, reiterated that the recent LAE move was unprecedented in its callousness.

“Personal power should never, ever be put ahead of the best interest of disadvantaged children,” Chavous said. “These union leaders have no shame.”