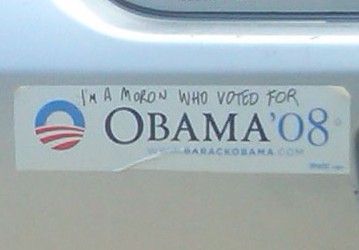 If you’re not inspired about four more years of the Obama presidency, you’re not alone. Today seems like National Gallows Humor Day. And as part of the festivities, we’ve seen the following – which may be gallows humor, or it may be real; we don’t know – virtually everywhere.

As the CEO of this organization, I have resigned myself to the fact that Barack Obama is our President and that our taxes and government fees will increase in a BIG way. To compensate for these increases, our prices would have to increase by about 10%.

But, since we cannot increase our prices right now due to the dismal state of the economy, we will have to lay off sixty of our employees instead. This has really been bothering me since I believe we are family here and I didn’t know how to choose who would have to go.

So, this is what I did. I walked through our parking lots and found sixty ‘Obama’ bumper stickers on our employees’ cars and have decided these folks will be the ones to let go. I can’t think of a more fair way to approach this problem. They voted for change……I gave it to them.

I will see the rest of you at the annual company picnic.

Obama inherited a 7.8 percent unemployment rate from George W. Bush, spent the next four years screaming about how terrible was the economy he was left with, and starts his second term with an unemployment rate of…7.8 percent. And that’s with a smaller labor force than Bush left him, meaning that were it not for all the people who gave up trying to get jobs the rate would be worse than anything contemplated in the Bush years.

And yet that was enough for re-election, thanks to half the country which thought “Binders full of women” and the dog on top of Mitt Romney’s car were good things to base electoral choices on.

If those are the first people who lose their jobs amid the carnage of Obamacare and the fiscal-cliff tax hikes, well…maybe there are worse things in the world.

Interested in more national news? We've got you covered! See More National News
Previous Article Piers Morgan, The Guy Who Knows Whether You Should Have A Gun…
Next Article Our Aunt Esther First Lady Strikes Again