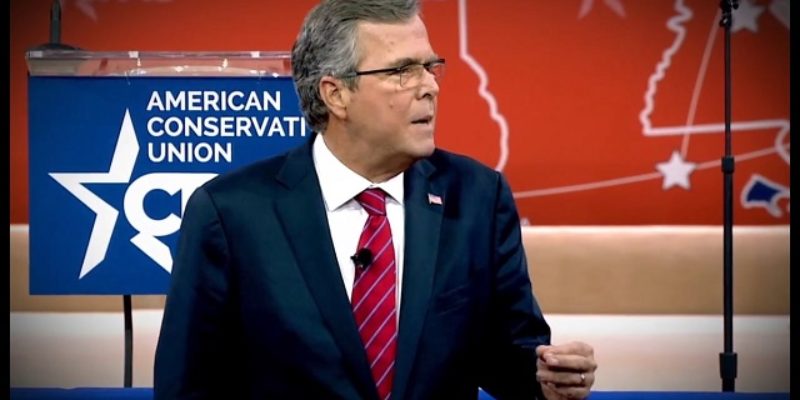 Jeb Bush realizes he has a problem with conservatives, so he’s out there trying to tell them he’s one of them. His Right to Rise PAC put out this video today to make that argument.

The video is a splicing of Jeb Bush’s remarks at CPAC when he did a Q and A segment with Sean Hannity. The video touches on some of Jeb’s record as Governor of Florida:

No word if he’s standing up for apple pie.

Now when you hear the applause in Jeb’s speech at CPAC, you have to keep in mind that Jeb bussed in a crowd from K Street for it. The day before Jeb’s speech, there weren’t any Jeb Bush supporters to be found. Suddenly before Jeb’s speech, you found people with daypasses wearing Jeb! 2016 stickers. Jeb’s name was also booed many times when he was mentioned on the CPAC stage.

Jim Antle writing at Rare reminds us why conservatives aren’t too fond of Jeb.

After all, Jeb is refusing to sign a pledge not to raise taxes; defending Common Core (though denying he favors a federal role in developing curricula); supporting amnesty; and advocating a Wilsonian foreign policy that has in the not-too-distant past led to $1 trillion wars.

Conservatives don’t view Jeb as one of them. With the policy positions he’s taken so far in this election cycle, it’s no wonder why. The problem with establishment Republicans like Jeb Bush is that they combine the worst traits of Republicans and pass themselves off as electable. They dig their heels in on the worst Republican policies, are unapologetically elitist (what’s more stereotypical than bussing in lobbyists from K Street), and finally are ready to surrender the first time a Democrat gives them a nasty look. The best example of this is John Boehner.

Jeb Bush will need more than a slick video and bussed in K Street crowds to change that perception.