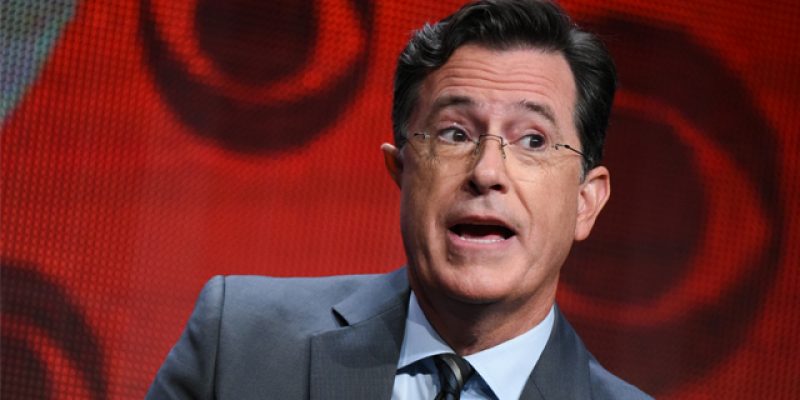 Earlier this week, Stephen Colbert’s opening monologue on his late night show was an angry rant against Trump and his treatment of one of Colbert’s CBS colleagues.

Among other things, he referred to Trump as Vladmir Putin’s “cock holster.” Here’s a bit of what I wrote at RedState about the rant.

Colbert is incredibly lucky that he picked up hosting duties of a late night show with a majority liberal audience right before Trump became the president. The late night “comedians” who have decided to make Trump 95% of their jokes are setting themselves up to be one-trick ponies who will be worthless to their networks when the Trump Era is over.

If you are reduced to crappy puns and gay slurs in order to make your viewership happy, you’ve failed late night comedy and should be ashamed. But, these people know no shame. They know only ratings, and the bottom is going to fall out on them sooner or later.

Well, the news broke recently that the FCC is now investigating the slur, and liberals are all upset about it. The problem, as CNNMoney points out today, is that doing so is the FCC’s job.

Despite all of Friday’s social media chatter and conflicting news headlines, the FCC is doing exactly what it always does.

Following Monday’s barrage of jokes, including one that implied Trump was taking part in a sexual act with Russian President Vladimir Putin, Colbert and “The Late Show” found itself in the middle of a backlash. Trump supporters felt he had crossed the line, and others said the joke was homophobic.

An FCC spokeman expanded on the issue to CNNMoney:

We review all consumer complaints as a matter of standard practice and rely on the law to determine whether action is warranted. The fact that a complaint is reviewed doesn’t speak one way or another as to whether it has any merit.

But, naturally, social media was alight with comments from liberals who said this was a part of Trump’s tyrannical plan to suppress any and all speech against him. Because that makes way more sense than the FCC, which has always maintained strict rules as to what can and can’t be said on air, doing its job.

If there are complaints, the FCC investigates. That’s what it does. But, in their quest to make everything they don’t like Trump’s fault, liberals are going to say that Trump’s administration is doing everything it can to squash public opposition and censor their opinions.

That is nuts, and it should not be tolerated at all.