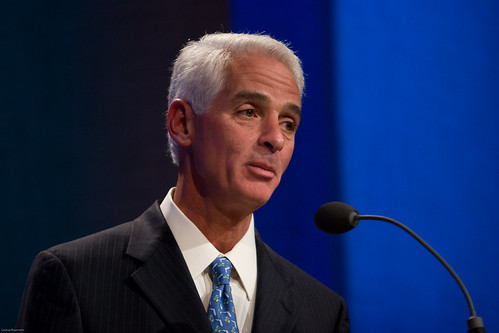 A Rasmussen poll out today shows some exceedingly bad news for Florida Gov. Charlie Crist as he hopes to keep alive his bid to earn a U.S. Senate seat as an independent.

Namely, Crist is getting left in the dust by Republican Marco Rubio in overall polls in a similar vein to what was happening to him while running in the Republican primary.

A poll two weeks ago had Crist at 38 percent to Rubio’s 34. It’s clear that Crist’s bounce upon announcing he’d run as an independent has melted away. And last week’s announcement by the Crist campaign that he wouldn’t return campaign contributions from GOP donors certainly didn’t help his cause.

Rubio is now beating Crist 68-23 among Republicans in Florida, a wider margin than two weeks ago when Crist held 30 percent of the GOP vote. Crist now trails Meek among Democrats, and leads Rubio by only three among independents.

Interested in more national news? We've got you covered! See More National News
Previous Article When The Historians Write About The Death Of The Old Media…
Next Article 2010 Election, May 18 edition (“David vs Goliath” primaries)