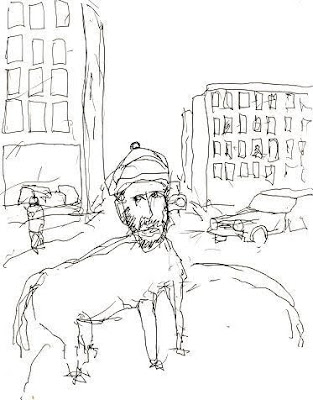 Swedish cartoonist Lars Vilks, who has been under death threats since 2007 for drawing a picture of the Prophet Muhammad as a dog, had his house firebombed over the weekend.

Vilks, who last week was assaulted by Muslims while giving a free speech lecture at Uppsala University in Sweden, is the target of constant attacks and threats since drawing his Muhammad sketch. Islamic law forbids images of Muhammad, whether the artist in question is a Muslim or not. In that respect and others like it, Islam seeks to govern people who are not its adherents – a key difference between it and other religions which makes coexistence between Muslims and non-Muslims, particularly in areas where Muslims do not govern, problematic.

One key source of this conflict is the situation in which Vilks finds himself. The Western concept of free speech, even for those opinions with which one disagrees, is in direct conflict with Muslim Sharia law which is alien to such freedoms.

Muslims attempting to impose their ban on images of Muhammad by force will find themselves with quite a workload this week. Thursday is Everybody Draw Muhammad Day, an organic Facebook event which now has over 35,000 participants.

Those who say they’ll be submitting a picture of Muhammad on Thursday have found themselves on the receiving end of some fairly unpleasant communiques from the adherents of the Religion Of Peace, including death threats, profanity, suggestions of acts which are anatomically improbable and, in the more polite responses, accusations of ignorance and disrespect.

In related news, the new Miss USA is a Lebanese Shi’ite Muslim who likes Hizbollah and has some rather dubious family connections as well as a history of dabbling in pole dancing.