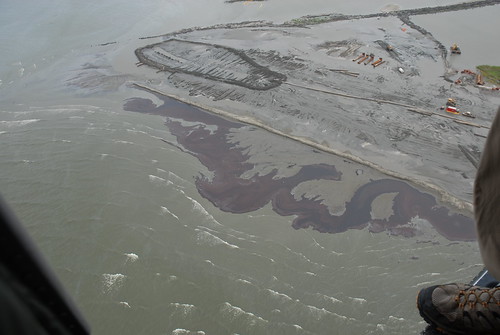 Today, following a visit to the state’s dredging operations at East Grand Terre, Governor Bobby Jindal announced that the state is executing an emergency contract to immediately begin mobilizing dredges and start work on the six sand-boom segments approved by the White House. The Governor said he sent BP an ultimatum today with two choices – sign a contract and start dredging immediately or provide the funds now and let the state start dredging. Governor Jindal stressed that BP needs to stop stalling so dredging can begin right away to protect Louisiana’s coast.

Governor Jindal said, “This morning, I authorized the state to execute an emergency contract with Shaw and Bean Dredging to immediately mobilize dredges and get to work on the six sand boom/dredging segments the White House approved yesterday to help us in our fight to protect the coast. We have also asked the Army Corps of Engineers to free up their contracted dredges as feasible. We expect to see dirt above water on the Chandeleur Islands in 10 days, unless BP forces additional delays.

“We sent BP an ultimatum this morning and told them they have two choices – either they can do this themselves or they can send us a check and get out of the way so the state can do it. I talked to the President last night and the White House again this morning – and we are demanding that BP stop stalling us with lawyers and paperwork and get to work on these segments, as the President ordered.”

There was substantial oil impact next to the sand-berm, which would have drifted into fragile marshland had the dredging operation not been conducted. Within the oil build-up, the Governor viewed heavily oiled birds including a number of Brown Pelicans. The Louisiana Department of Wildlife and Fisheries (LDWF) was contacted immediately to deploy biologists to visit East Grand Terre and rescue the birds. LDWF later reported that their biologists rescued around 20 oiled birds from the East Grand Terre area.

Governor Jindal said, “We just came back from East Grand Terre. We activated that dredge to start work on our sand boom efforts a few weeks ago, in the absence of any action from BP or the federal government on sand boom efforts at that time.

“It was exactly a week ago today when we first landed on East Grand Terre to see our state dredge in action building sand boom. Even after seven full days we still do not have the first dime from BP to begin dredging on even the first segment of sand boom that the Coast Guard approved last week. We know that BP has a lot of money to pay a lot of lawyers to drown us in a lot of contracts and red tape for a long time. We need the federal government to make sure that does not happen. We need these funds immediately to get to work. We are in a fight to protect our way of life and they haven’t given us the first penny to get to work on these projects. This is BP’s spill. BP is the responsible party, and we need the federal government to hold them responsible.

“CPRA estimates that about 100 miles of sand berms will help protect about 4,000 miles of our shoreline. We could have already constructed around 10 miles of this sand boom if our plan had been approved 22 days ago when we first submitted it – on May 11th. According to NOAA, about 140 miles of our coastline has now been impacted by oil. Again – this is why we need to be fighting this oil 15 to 20 miles off of our coast and not up in the fragile marshland. We continue to ask the Coast Guard and the federal government to approve our entire 24-segment sand boom plan, by giving us the permits and approvals we need to work on the other 18 segments we proposed. Our entire coast is important.”

Governor Jindal said the Louisiana National Guard is moving forward today in deploying a prototype barge with oil suction capabilities. The Coast Guard just last night approved plans for the National Guard to place oil suction equipment on a military float bridge or barges that can transport the vacuums into marsh areas for clean-up operations.

Today, the National Guard is locating float bridge equipment in Buras to begin construction of this military float barge while also working with BP to contract commercial barge and suction equipment to build this first prototype. The National Guard will do a reconnaissance mission in Plaquemines Parish today to identify an area of the marsh that will be the best place to start clean up efforts once the construction of this vacuum barge prototype is complete.

Grand Isle David Mayor Carmardelle has been working on the development of a plan to close the passes to the east and west of Grand Isle. The Governor said the state previously placed requests for high-sea boom on these islands, but this boom has not been made available and the passes have allowed for oil to get into Barataria Bay.

Governor Jindal said, “The mayor, together with Jefferson Parish President Theriot, the Jefferson Parish Council and others developed a plan to narrow the passes with rock and to establish active sorbent and vacuum operations from barges closing the remaining gaps on the passes. The barges would be anchored down and then chained together to provide for a contiguous barrier across the passes. This will accomplish two goals. First, it will help to prevent more oil from getting into Barataria Bay, and second, it will actually facilitate the removal of oil.

In addition to the state’s dredging work at East Grand Terre, there are six areas where the state is moving ahead to fight to protect the coast:

1. Protecting Marshes: In Plaquemines, Jefferson, Orleans and St. Bernard parishes the state is working with parish officials to establish a Marsh Fringe Barrier – a combination of plugs and berms – to keep surface oil from penetrating interior marshes. In Lafourche and Terrebonne parishes, they are identifying east to west canals that could be fortified with boom to serve as a seal to prevent surface oil from further intruding into the marshes there. CPRA is also working with National Guard to look for key points to fill in sand in St. Tammany and Jefferson Parishes. The National Guard also conducted a boat reconnaissance mission in Plaquemines Parish to identify approximately 14 miles of gaps in the parish coastline.

2. Hesco Baskets: The National Guard has deployed two and a half miles of Hesco baskets in the Fourchon area.

5. Sand-Fill Operations: CPRA and the National Guard have leaned forward and identified approximately 40 total locations where gaps in barrier islands could be filled with sandbags or dump trucks of sand. This strategy would complement a more complete and extensive dredging/sand booming plan. On Pelican Island, the National Guard has dropped over 2,200 sandbags to date. Six of the eight gaps on Pelican Island have been completed and they are continuing work on the 7th gap on Pelican Island today. They are also working on the 1st gap on Scofield Island and have filled in more than 1,030 sandbags to date. The state also requested that BP augment these efforts with private contractors and the state is still awaiting BP’s response. The National Guard also filled a 115-foot gap near Trinity Bayou.

6. Freshwater Diversions: The state is currently operating all freshwater diversions under their control to flush fresh water down into the Gulf.

DEQ reports that the following areas have been impacted by oil to date: South Pass, Pilot Bayou/Johnson Pass, Pass a Loutre/Redfish Bay, the Chandeleur Islands, Grand Isle/Elmer’s Island, Grand Terre Island, Brush Island, Lake Raccourci, Chenier au Tigre, Trinity Island, Fourchon Beach, Timbalier Bay, Shoreline of Lake Felicity, and Marsh Island. Clean up operations are scheduled for today in the Chandelier Islands, Brush Island and Fourchon. In the last 24 hours, the state has received 99,490 feet of hard boom and 18,390 feet of hard boom has been deployed by BP and the Coast Guard.