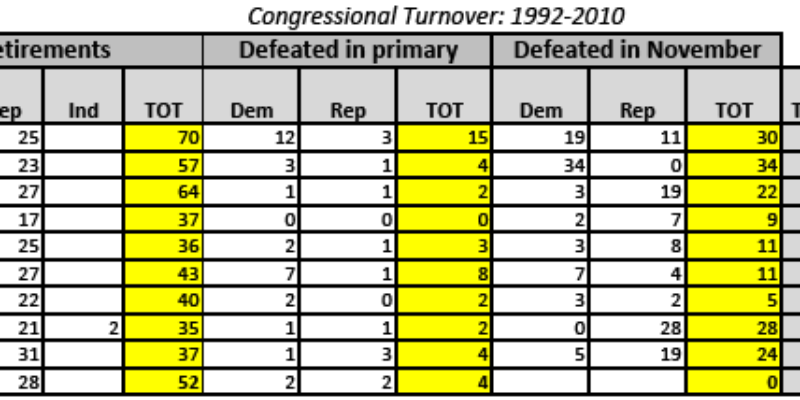 While the fact that (so far) four incumbent Congressmen have lost in their primaries might be indicative of an anti incumbent election, this number actually pales in comparison to 1992. In that year, a combination of “The Year of the Woman”, a sluggish economy, the House banking scandal, and reapportionment contributed to the primary defeat of 15 incumbents (12 Democrats and 3 Republicans). When you combine the 15 primary defeats with the 70 who retired and the 30 incumbents who were defeated on the same day that Bill Clinton was elected and Ross Perot took an impressive 19% of the vote as a third party candidate, you come up with a sizable freshman class of 115 (21.5% of the membership of Congress).

Thought #2: Current year landslides = retirements for the next election cycle

Landslide elections tend to create a retirement wave in the following election cycle, especially if there has been a power shift. For instance, the 1994 GOP landslide caused 64 Congressmen (37 Democrats and 27 Republicans) to retire before the 1996 elections. Similarly, the 2006 Democratic landslide (which itself claimed 28 GOP incumbents) caused 37 Congressmen (31 Republicans and 6 Democrats) to retire before facing the voters again in 2008.  The 2008 Democratic landslide (which claimed 19 GOP incumbents) initially produced a wave of Republican retirements, but after parts of the Democratic agenda (“cap and trade”, card check, healthcare reform) became more controversial with voters, Democrats began to retire as well. Currently, 52 Congressmen (28 Republicans and 24 Democrats) have chosen to retire, and filing has yet to close in 10 states representing about 80 Congressional seats. Should the GOP capture one or both houses of Congress, it’s not inconceivable that you would see a wave of Democratic retirements in 2011-2012 like there was in 1995-1996.

In fact, what is not generally remembered from the 1996 elections is that it claimed 19 GOP incumbents like the 2008 elections did. Those defeats, however, did not enable the Democrats to regain control of Congress in the same year that Bill Clinton was re-elected because the previous (1994) election cycle was a GOP landslide, and in its aftermath, 37 Democrats were scared into retiring. This population of retirements  (especially those in the South) created enough pickup opportunities for the GOP to maintain control of the House that year.

Thought #3: The ghost of future retirements

Regardless of what happens this fall, two realities ought to cause heartburn for the Democratic majority in the near and long term future. In the near term, the Democratic senators elected in 2000 and 2006 elections (and who twice helped put the Democrats in control of that chamber) will face the voters in 2012. And the fact that that 23 of 33 Senators in the 2012 re-election are Democrats means the GOP has a good chance of retaking the Senate in 2012 even if they fall short this year. In the longer term, the fact that Democratic incumbents are repeatedly re-elected also means that their mortality will eventually catch up with them. Currently, of the Congressmen seeking re-election, 60 (39 Democrats and 21 Republicans) are between 70 and 79 years old, and 13 (9 Democrats and 4 Republicans) are at least 80 years old.