Doug Ross has a great post today on something Republicans ought to be exploiting in this election cycle, but so far have not taken advantage of.

Namely, the staggering amounts of money being poured into Democrat campaigns by unions whose pension funds are flat broke.

The Center For Individual Freedom notes that the AFL-CIO has pledged $53 million to support Democrats this fall, while SEIU is spending $44 million. AFSCME is adding another $50 million. That’s big money from big unions. AFL-CIO has 11 million members, SEIU 2.1 million and AFSCME 1.4 million – so for 15 million union members, $150 million doesn’t amount to all that huge a figure broken out on a per-member basis.

But the bosses of those unions haven’t exactly taken a poll of the members to figure out where they’d like to see the campaign cash go, have they? Sure, SEIU and AFSCME members who are almost exclusively public-sector employees are Democrats anyway would support the choice – but would the AFL-CIO membership? What about the members of those unions who don’t support Maxine Waters, Chuck Schumer or Richard Blumenthal? Wouldn’t they rather have some of that campaign cash put into the notoriously underfunded pension programs the union bosses have raided over the years?

And this is where the GOP has a potentially huge winning issue. As CFIF mentions:

Nor do union bosses seem to care any more about American taxpayers’ plight than they do about members’ hardships when it comes to their partisan political goals.  To illustrate, they’re now pushing federal legislation to dump grossly underfunded union pension plans into the Pension Benefit Guaranty Corporation (PGBC).

In other words, labor leaders want a bailout for union pensions.

For decades, union negotiators have steered dollars toward such things as political campaigns and generous pay and benefit packages, rather than responsibly funding retiree pension obligations.  Now, with pension obligations climbing and fund assets dwindling, union executives realize that they can’t satisfy the years of promises that they irresponsibly made.

Their solution?  Dump union benefit obligations onto taxpayers.  That way, union leaders could continue to fight declining membership with promises of unsustainable pay and benefits, while shifting pension responsibility to others.  Otherwise, according to a Wall Street Journal reference to a legal group formed on labor organizations’ behalf, unions would face “increased pressure at the bargaining table to decrease contributions and cut benefits.”

Labor unions once served to safeguard individual employees who had little or no bargaining power with employers.  Today, however, they increasingly seem to care more about well-paid union executives and liberal political candidates to whom millions of union campaign dollars are directed. 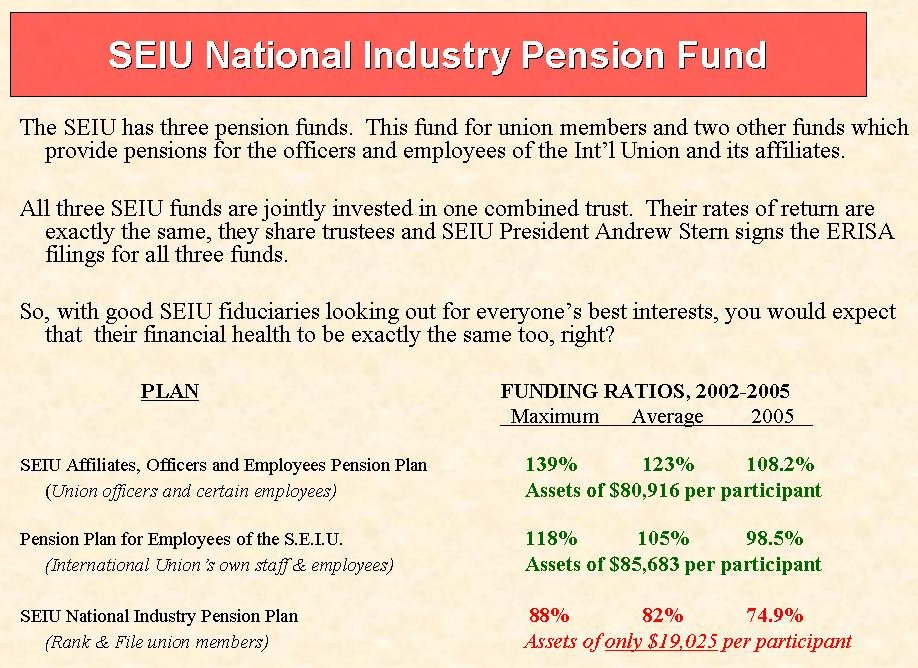 And another, with numbers from the business school at Northwestern University… 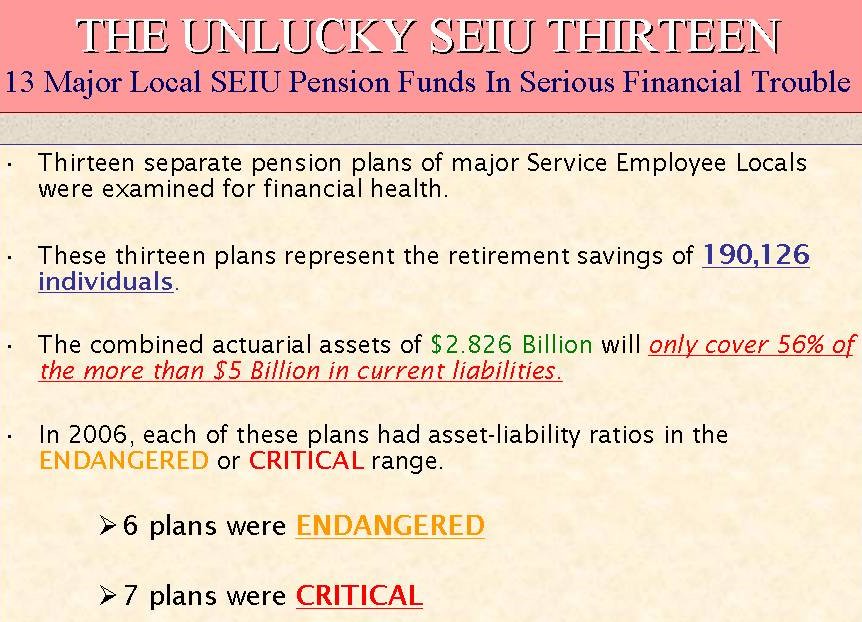 All this provides the GOP with a strong story to tell – namely, that a bunch of crooked left-wing union bosses, personified by the loathsome Andy Stern at SEIU and Richard Trumka at AFL-CIO (those two in particular offer a wealth of unfortunate sound bites for 30-second spots) have been engaged in fleecing hard-working union members for years. The misuse of the members’ money has been so acute that virtually none of those unions’ pension funds are solvent. And rather than take steps to remedy what they’re doing, they’re gambling even more of their members’ funds on Democrats in an effort to pull a bailout out of your wallet.

You can imagine all of the different levels such a narrative can work on. People hate bailouts; well, that’s what the unions want. Government employees are making too much money compared to the private sector; well, here’s $94 million being spent in an effort to exacerbate that situation. There’s too much money in politics; well, how does $150 million spent by union boss fatcats strike you? We could go on all day.

Republicans have soft-pedaled the union issue for a long time, to their detriment. The marketplace has not been friendly to unions in the private sector, and as such less than 10 percent of our productive economy is unionized (and what part of it actually is generally has been struggling – a perfect example being the performance of GM compared to non-union Nissan America). Now, most union members actually work in the public sector – and the public understands what’s going on in the public sector is unsustainable. Defining the Democrats as slaves to this corrupt enterprise will turn that money into a negative for the candidates who take it, and the GOP needs to start doing it as soon as possible.

Interested in more national news? We've got you covered! See More National News
Previous Article New Orleans Hosts Environmental Case of Historic Proportions
Next Article Organized Labor’s Threat to Economic Growth and Job Creation: What You Might Not Know and Why It Matters