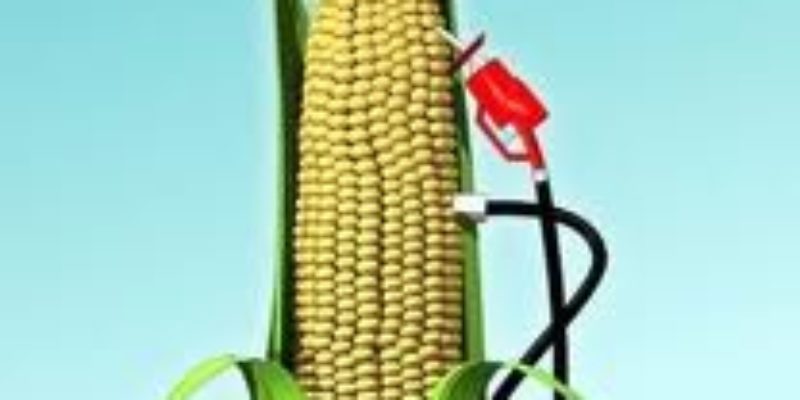 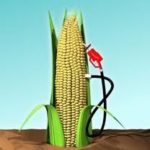 Since the 1970’s, many local gas pumps have borne a sticker indicating that the gasoline being dispensed “may contain up to 10% ethanol.”  Ethanol from corn, most likely.

The agriculture lobby loves it.  The politicians who have benefited, and continue to, from that lobby’s money love it.  We’re told that it’s a “green” renewable fuel that offers many benefits to the environment and society.

Ethanol contains less available energy on a volumetric basis than does gasoline.  That means engines burning it run less efficiently and deliver fewer miles per gallon than those burning pure gasoline.  Gasoline/ethanol blends, “gasohol,” produce more hydrocarbon emissions and nitrogen oxides than do pure gasoline.  And it releases more carbon dioxide, the ultimate green sin.  According to a study by scientist Marcelo Dias de Oliveira, who looked at the “big picture” environmental impact of ethanol, considering the land destroyed by planting, the water consumed for irrigation, and the aforementioned increase in air pollutants emitted, ethanol does more harm than good.

That is certainly the case along the Gulf coast, where a dead zone occurs annually and has been growing larger every year.  That dead zone, or hypoxic area, where there is less than 2 parts per million of dissolved oxygen in the water, is mostly caused by nitrogen and phosphorous, primary fertilizer constituents, being flushed down the Mississippi River from Midwestern farmland along the Mississippi River Valley.  The increased levels of nitrogen and phosphorous encourage the growth of algae, and dissolved oxygen is depleted.  Corn is one of the major crops grown in the states that drain into the Mississippi, especially since the federal government began subsidizing it for the production of ethanol.

This all began in 1978, during the Carter administration.  The country was caught up in the Persian Gulf War, Carter’s presidency was in trouble, and America was crying to reduce her dependency on Middle Eastern oil.  (Sounds familiar)  Carter was approached by the CEO of food giant Archer Daniels Midland, a Mr. Dwayne Andreas, who convinced Carter that the best way to make America energy independent was to convert her appetite for transportation fuel from gasoline to ethanol.  Carter bought into the concept, and convinced Congress to pass a tax exemption for ethanol.

But Andreas wasn’t satisfied.  Ethanol was well established elsewhere, especially in Brazil where ethanol was being produced from sugar cane syrup, and ethanol could be imported more cheaply than it could be purchased from domestic sources.  So Andreas convinced Carter and Congress to impose a tariff on imported ethanol.  In exchange, Archer Daniels Midland promised to build a new ethanol from corn facility in Des Moines, thus greatly improving Carter’s fortunes in the Midwest.

Archer Daniels Midland became America’s powerhouse in the ethanol business.  Congress and the environmental movement became wild about ethanol, with the environmental movement praising it as bringing the country a step closer to cleaner air.  Politicians from the corn belt similarly praised the corn farmers from their districts, and in 1980 Congress passed an income tax credit for gasohol producers.

Then in 1991 the EPA imposed its Clean Air Act, which set limits on the amount of polluting hydrocarbons that could be contained in fuel emissions.  As we’ve noted, gasohol releases more such hydrocarbons than pure gasoline, and the Clean Air Act would have outlawed it.

George Bush, the elder, quickly received a $400,000 campaign contribution from Archer Daniels Midland, and Bush soon announced that ethanol was exempt from the Clean Air Act.  Bush lost to Clinton, and Andreas, who had contributed heavily to that campaign as well, was at the inauguration.

Clinton repealed Bush’s exemption and replaced it with a mandated ethanol component in gasoline.  Though that mandate was later stricken down, gasohol was America’s transportation fuel.  By 1995, Archer Daniels Midland was producing 60% of the ethanol used to produce it.

Ethanol is an inefficient fuel that is harmful to the environment, both as a direct air pollutant and as an indirect water pollutant.  It would not be cost effective in a tariff and incentive free market.

We haven’t even touched on its impact on the cost or supply of food as farmers converted to varieties of corn better suited to ethanol production, and we haven’t touched on the damage it does to elastomer components in vehicle engines, or to small stationary engines (lawnmowers) that may sit idle for months at a time.

Nonetheless, the EPA is considering, under pressure from the agriculture lobby, increasing its required 10% ethanol blend requirement in gasoline to 15%.  That’s right – Lisa Jackson’s EPA is considering increasing the required amount of carbon emitting ethanol in gasoline while also attempting to impose carbon emission limits on industry by rote because the Senate can’t pass Cap & Trade.

The consideration should be on removing the requirement all together, along with the incentives that make it profitable.

For as any twenty-one year old can tell you, there are much better uses for grain alcohol than to burn it in your car engine.