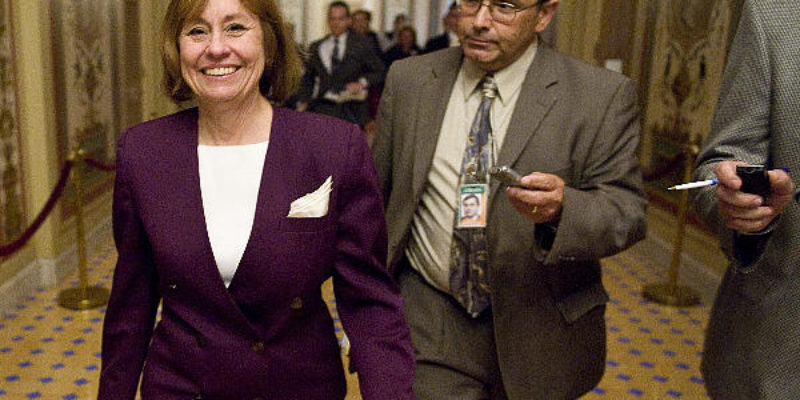 Today, audio tapes were released containing 45 minutes of a conversation between Sharron Angle and Scott Ashjian, concerning the general election for the Nevada state Senate seat.  Angle was attempting to convince Ashjian, backed by the Tea Party of Nevada, to drop out of the race.  Angle is a GOP candidate backed by a national tea-party organization, the Tea Party Express, and the Club for Growth.

Also released were voicemails left by Angle’s attorney, Cleta Mitchell,  in response to statements made by Sid James, Tea Party of Nevada Chairman,  that Ashjian was considering dropping out of the race.  These voicemails and correspondence between the two camps predated the actual recorded meeting between Angle and Ashjian.

It is understandable that Angle would want Ashjian out of the race as the existence of his campaign may hold the key as to whether conservative forces in Nevada can unseat Senate Majority Leader Harry Reid.  Preliminary polls gave a wide degree of latitude between Reid and Angle, showing as much as an 11point gap in Angle’s favor.  However, recent Rasmussen polling data indicates that Angle and Reid are in a dead heat: Angle with 47% support and Reid with 48%.  However, 4% of Nevada natives like the third-party candidate in the race, Ashjian.

Here is the transcript of the voicemail correspondence courtesy of The Examiner in Las Vegas:

Hi, Hello my name is Cleta Mitchell. C-L-E-T-A Mitchell. My number is…I am the attorney for the Sharron Angle campaign and I understand that you have spoken to one of the Republicans in the senatorial committee deal staff and he conveyed to me that you would like to talk to me about withdrawing as a candidate, ahh, the Ashjian candidacy so or something. I am not sure what that is about but if you would call me I would be more than happy to talk to you, Thank you so much. Bye bye.””Hey, um, Dr. James this is Cleta Mitchell. I don’t know what happened. You just kinda faded away, and I did not hang up on you. I appreciate your effort, umm, I’m, well, look, I can settle anything, I have been practicing law a long time and let me tell you I can settle anything. But I gotta have a meeting of the minds and you got a whack job you are dealing with and he has got a lot of ego involved here and he says he is getting 18, 19 percent of the vote, well that’s great, costing Sharron the election, costing us the election. It isn’t about Sharron Angle. It’s about Harry Reid and for our country. So… good luck to you. You know my cell number please call me. Although I am going to go to bed in the next hour, I am not staying up all night. I am really tired. I have been in Delaware for two days and feel free to call me anytime tomorrow. Thank you for trying. Thank you, thank you for trying. This is really important. Thank you. Bye bye.”

The “whack job” she refers to is Scott Ashjian.  She isn’t necessarily wrong in saying so either.  Ashijan, during the one hour meeting with Angle, declared that he was actually the main opposition to Harry Reid.  Yeah, he’s a little nutty.

Thanks to Scott and insider information from Citizen K it is apparent that this “Tea Party of Nevada” is nothing more than a theatre set up by Reid to steal votes from Angle.  It is becoming increasingly clearer that she will need that 4% committed to Ashjian.  The race might well come down to that 4% and it would be a shame to see an opportunity such as this slip by, especially at the hands of a Democrat trick.

However, the tape-recordings of the meeting between Angle and Ashjian are far from harmful to Angle’s cause as one might expect.  In fact, to me these recordings might actually pull away some of that 4% dedicated to Ashijan.  They reveal a woman deeply committed to the conservative cause and dedicated to the dream of pushing a conservative agenda in Congress.  Here are some excerpts thanks to John Ralston of the Las Vegas Sun, very interesting stuff:

Angle: “The Republicans have lost their standards, they’ve lost their principles…..Really that’s why the machine in the Republican Party is fighting against me…..They have never really gone along with lower taxes and less government.”

The one thing you said about the machinery that has endorsed me, they have no choice… …it’s me or Reid…that’s what they got…. also this is such a national race…so really we have them in a box…they are coming to us and saying, ‘We know we got to support you.’ ….In some ways, it’s exactly where we wanted that good old boy thing is in the box…(She then begins using an analogy about David and Goliath, and David shedding his armor.) ‘You gotta get my armor off and let me pick up this slingshot’…..that’s where I am right now, get them to leave me alone for long enough so I can…. go after this guy…. you (Ashjian) have tapped into it, the essence of America….and the essence of America is we are tired of politics as usual… only thing that’s different between you and I is I guess I was pragmatic enough to know…that third parties can’t get traction….so I said all right, I’ll work with it. just show me what the rules are and I’ll work with it…the rules are there are Democrats and Republicans…so I moved myself up within the Republican ranks….they have no choice, I’m the only game in town…. There was no one more shocked than they were when I won that primary, when I went back to Washington DC, they were still moaning and groaning and weeping and gnashing teeth over Sue Lowden…And I said I am what ya got, this is it.”

Angle: “(The Republicans in DC) don’t want me back there…because they know I’ll shake this mess up….…..I shook it up in Carson City, they hated me there…41-Angle was not a compliment……..When I go back, there may be five or six of us….maybe Joe Miller (Alaska), Ken Buck (Colorado), Christine O’Donnell (Delaware).

Ashjian: “She (O’Donnell) doesn’t have a chance.”

Howard Kurtz of the Washington Post agrees with me that this tape-recording is actually probably very beneficial to Angle, he writes:

While Sharron Angle says some mildly embarrassing things in her conversation with a tea party candidate in Nevada, I’m not sure it hurts her. Why? Because many voters will probably sympathize with her over the surreptitious taping.

Not only will voters sympathize with her, they will have a whole new respect for her cause as a candidate.  These words aren’t prepared remarks.  They aren’t politically correct jargon.  This is the real Sharron Angle.  And for all the skepticism about politics, the real one sure looks alot like the the image she’s tried to portray.

Tip of the hat to Citizen K and Scott.