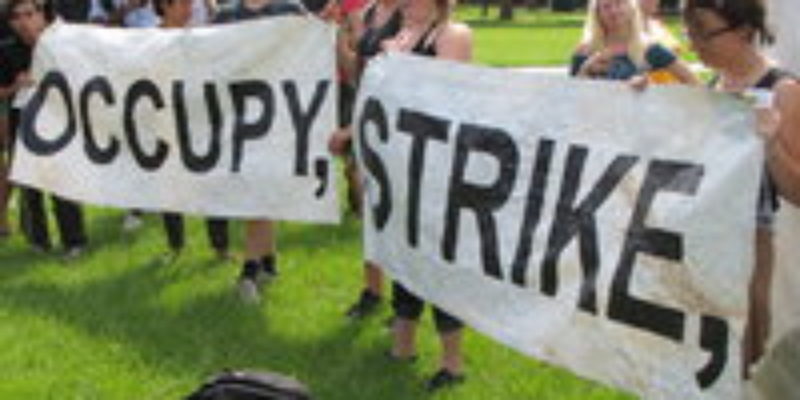 Hayride readers may remember the April fireworks involving the anarcho-communist protest at the Southern Republican Leadership Conference.  In the aftermath of the protests, Gov. Bobby Jindal’s fundraiser  Allee Bautsch and her boyfriend Joe Brown were followed and attacked blocks from Brennan’s Restaurant in the French Quarter by, it is assumed, several of the protestors.  Bautsch’s leg was stomped on and broken in five places, while Brown suffered a concussion and broken jaw.

If you recall, one of the central figures in the organization putting on the protest-turned-riot was a man named Dylan Barr.  The complete cast of characters involved can be found here.

Barr, who goes by the internet pseudonym “D-Bloc,” is a central operator of something called the Iron Rail Book Collective, based out of New Orleans.  Here is a description of this individual as reported by our own MacAoidh back in April:

So now we’re looking for someone named Dylan who works at the Iron Rail. A search to that effect yields a Dylan Barr, identifying himself as a “Worker, Iron Rail Bookstore (New Orleans, LA)” on a petition to “Free Jeff Luers,” an environmentalist terrorist who pleaded guilty to burning sport utility vehicles at an Oregon car dealership.

In addition, this description of Dylan was composed by the website anarchistnews.org:

Dylan is a long-time anarchist and activist from New Orleans, and he has been a member of the Iron Rail Book Collective for over three years. Dylan moved to Seattle just prior to Hurricane Katrina, but has now moved back to the Crescent City. He helped organize the 2007 New Orleans Book Fair and is involved with the rebuilding of Nowe Miasto, a long-running collective space in the city, as well as being involved in the recent struggles over public housing in New Orleans.

For the record, here is the description of Iron Rail as described on their website:

Founded in December 2003, the Iron Rail is committed to anarchist, anti-authoritarian, feminist, anti-racist, queer-positive and class-conscious politics, and to providing alternative literature and information to the people of New Orleans.

And of course, let’s not forget his criminal record:

On October 29, 2007, Dylan Barr entered a guilty plea to one felony count of Second Degree Extortion in Seattle, WA for disrupting the operations of Washington Mutual Bank with a Denial of Service attack because of its investment in Huntington Life Sciences. After a two-year period of legal limbo and non-snitching plea deal negotiations, he was sentenced to 232 hours –29 days— of community service and ordered to pay Washington Mutual Bank $25,000 in restitution.

During the investigation of the SRLC violence,  Dylan Barr vanished from the public eye – other than the occasional letter to the Federal Reserve asking for more home loans to poor people.  However, recent radical protests have brought him back into the limelight.  Barr can be linked to many of the recent protests against higher education budget cuts.  You may recall that last Thursday was a date singled out by the national organization, Defend Education, to serve as a “national day of action to defend public education.”  Two major protests occurred: a mock jazz funeral at LSU staged by ProudStudents and a rally at ULL organized by Links for Literacy.

Now, ProudStudents and Links for Literacy may not be directly involved in the underlying current of anti-establishment.  There is no concrete proof to suggest this connection at the moment.  However, both organizations share a common affiliation with the New Orleans based Save UNO Coalition.  Here is where our old acquaintance Dylan comes into play.

In searching the official websites and facebook pages of each of these three organizations for the name Dylan Barr, no connections arose.  However,  in a search of the Save UNO Coalition facebook group, one member turned up by the name of  “Dylan Onymess.”  Upon inspection of this individual’s facebook page, it becomes apparent that Dylan Onymess is actually the notorious Dylan Barr.

Here is the evidence to support this accusation:

Listed under his activities is one item: The Iron Rail Book Collective.  He is friends with 4 interesting people: Tyler Barr, Jeanne Barr, Bob Barr, and Wesley Barr. Relation? No way, different last name, right?  Inspection of Tyler Barr’s facebook page reveals the solidifying connection.  Tyler Barr has listed as his siblings Wesley Barr and Dylan Onymess.  His parents are listed as Bob Barr and Jeanne Barr.  Interesting that one of his brothers has a different last name.  Would there be a reason he would want to hide that surname? Hm.

He is also friends with Gina Pea, another suspect behind the SRLC protests.  Gina Pea was described at the time as follows:

She has a blog. And a Twitter feed. Don’t go to either one if F-bombs bug you. If they don’t, you’ll find that she had an abortion in December of 2008 and wants her readers to know about it.“Gina P” also has a blog update on the Iron Rail site from back in January letting the collective in on an exciting event – “Ladies’ Night,” at which there would be a book discussion of The Coming Insurrection. In case you haven’t heard about this one, it’s been on Glenn Beck’s TV show to less-than-favorable reviews; Beck is of the opinion that it’s the most evil book ever written. While you can agree or disagree with Beck, the Wikipedia entry on it says the following:

The latter part of the book begins to offer a prescription for revolutionary struggle based on the formation of communes, or affinity group-style units, in an underground network that will build its forces outside of mainstream politics, and attack in moments of crisis – political, social, environmental – to push towards anti-capitalist revolution.

Gina Pea has the Iron Rail Book Collective listed as one of her activities.  Shocker.

So Dylan Onymess is Dylan Barr, and this man is involved in the Save UNO Coalition. What harm has he done, one might ask?

Further investigation reveals that Mr. Barr is affiliated with a national grassroots organization known as Occupy Everything.  The description of this group is as follows:

Occupy Everything is a Global Project reclaiming both physical and cultural space from private and institutionalized control for the use of the greater society.

Interesting philosophy.  Sounds a little bit like socialism to me.  Maybe anarchy?

Deeper delving into this upstart socialist group reveals a more widespread issue that is in effect in Louisiana.  There are two organizations at work within the state affiliated with the national Occupy organization.  The two organizations are called Occupy UNO and Occupy Louisiana.  However, it seems as though these two groups have recently consolidated.  Occupy Louisiana is a more recent institution and appears to have taken over the mission of Occupy UNO, further radicalizing it in the process.  This consolidation may also be the result of involvement in the organization on a broader state level.   Here is its expressed purpose:

We are guided by a simple maxim: omnia sunt communia, everything belongs to everybody, as a famous heretic once said. This is the only property of things which we respect. If possible, we will use this space as a staging ground for the generalization of this principle, here and elsewhere, a staging ground for the occupation of another building, and another, and another, for the continuation of the strike and its extension beyond the university. Then we can decide not what we want but what we will do. If we fail this time, if we fall short, so be it. The call will remain.

They use this socialist principle to justify budget cut protests.  In fact, “occupation” by this radical organization has already occurred.  You may remember the unruly protests at UNO regarding budget cuts.  This protest involved the “occupation” of Milneburg Hall.  It involved a group of 8 activists, including one interesting individual who is quoted in a Times Picayune article covering the events:

They said they were sympathetic with our protest, but next time, they want us to notify them if we plan to take over a building,” said Dylan Barr, one of the occupation’s participants and a junior at the university. “We’re suspicious they won’t let us do it if we tell them.”

So, it comes full circle.  Dylan Onymess, Dylan Barr, anarchist, socialist, and possibly the organizer of Occupy Louisiana was arrested on September for his involvement in protesting budget cuts.  But this action will not be the last we hear of the infamous Dylan Barr.

Although Barr, a senior geography major, called for a march on the State Capitol, neither he nor his fellow organizers on Wednesday had scheduled future activities. Nevertheless, Barr said, lawmakers are “going to have to start listening to us, instead of the people who give campaign contributions.”

Actually, more events were indeed on the schedule.  The Save UNO Coalition facebook page has recently organized a march to the capital on November 10th.  Barr (Onymess) is a member of this group.  Interestingly enough, ProudStudents at LSU and Links for Literacy at ULL have committed to marching with the UNO Coalition.

There is a further connection between Occupy Louisiana, ULL Links for Literacy, LSU ProudStudents, and UNO Coalition.  The Occupy Louisiana website lists organizations they call “comrades.”  There are three institutions of interest on this list: Links for Literacy, Save LSU, and Save UNO Coalition.  Save LSU is a broad organization at LSU which serves as an organizing unit for several student organizations, including ProudStudents, to protest budget cuts.

Oh, and that mock jazz funeral held by ProudStudents last Thursday?  It was a copy of a jazz funeral for higher education carried out in March by the Save UNO Coalition.  Coincidentally, there were UNO student protesters at the LSU event.  Guess what?  These UNO students were members of Save UNO.

Another endorser is a man named Dan LaBotz, running for Congress in Ohio as a Socialist Party member.  Another interesting endorser?  Links for Literacy.

Is it a coincidence that the socialist Occupy organization originated in California along with the Defend Education group? Possibly.  But I would wonder, if so many socialist organizations are contributing to Defend Education, why would Occupy not be an endorser?  Unless, of course, the leaders of Occupy are more directly involved with Defend Education.  Possibly in an administrative role?  But that is simply my conjecture.  You can decide what to believe for yourself.

However, what is indisputable is that the anarchist Dylan Barr has resurfaced in Louisiana.  He’s involved in a socialist organization called Occupy Louisiana and has affiliated on a national level with Occupy Everything.  Furthermore, he is using this socialist organization as a vessel to funnel the anger of college students across our state towards the pursuit of political goals far outside the American mainstream. All of this is far beyond the realm of coincidence.