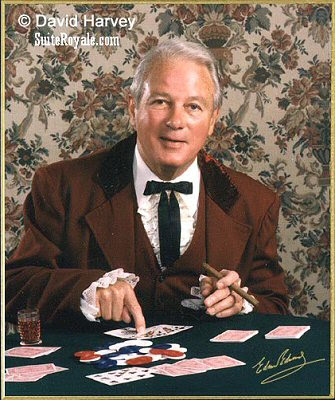 Fox 8 in New Orleans is reporting that the job Edwin Edwards got for himself as a condition of his parole is with Buddy Leach – the chairman of the Louisiana Democrat Party.

Not much of a surprise there. Nobody particularly expected Edwards to hustle a gig off CareerBuilder.

But Edwards’ parole indicates that he’s not to be involved in politics. Not for the next six months, at least. So his taking a job with Leach is suspect, to say the least.

Not to fear, says Leach. Edwards won’t be doing political work, and he won’t be working for the Democrats. He’s going to be a “personal consultant for an oil and geothermal company owned by Leach.”

Channel 2 in Baton Rouge expands on that.

Leach says Edwards has only been hired as a consultant to talk to him about the oil and gas business and alternative energy.  But it’s up to the former governor if he wants to talk politics with anyone else.

Leach said, “I think that if I ask, he will more than likely have some ideas that will help in administration of the state.”

But Leach says he hired Edwards for his fuel expertise.  Edwards changed the way the state benefited from oil royalties for the better.  And political analyst Roy Fletcher says there’s not better place for Edwards to be than offering his advice on fuel.

The job is only for the six-month requirement of Edwards’ home-confinement and he starts Tuesday.

We’ll open this one up for comments from the readers. Does anyone believe an ex-con who’s been in prison for 10 years can actually contribute anything of value as a “personal consultant” on alternative energy or the oil and gas business? And does anyone believe Leach, whose history of buying votes as a generally-failed politician in his own right and, recently, laundering money from candidates’ relatives to their campaigns calls anything he says into question, when he says he’s not hiring the most influential Democrat politician in Louisiana over the last 50 years to do political work?

It would be a real shame if Leach’s job offer turns out to lead the Zipper into a parole violation. A real shame.

Interested in more news from Louisiana? We've got you covered! See More Louisiana News
Previous Article The Edwin Edwards Cult Of Personality
Next Article Why the unequal time?