Our buddy Steve Maley has a good piece over at Redstate.com detailing the mindset behind the conclusions of the president’s oil spill commission, and it’s well worth a read – because, as he notes, this administration and its ideological pals are busy attempting to destroy public support for domestic oil and gas production by casting energy independence – or even the attempt at it – as hopeless.

Specifically at issue is a quote from the head of the commission, former Florida Democrat Senator Bob Graham:

This is a wakeup call to the American people. Why are we drilling in deeper and inherently more risky offshore locations? The United States is consuming about 22 percent of the world’s daily extraction of petroleum while it sits on top of less than 1.5 percent of the world’s proved reserves. If we “drill baby drill” in an attempt to go totally independent, and if our thirst for petroleum continues at its current level, the United States will drain its remaining proven domestic oil reserves by 2031.

If we stay at our current 48 percent domestic and 52 percent imported oil, that date will only be extended to 2068. Unless we develop and sustain a national energy policy which will fundamentally change our petroleum addiction, the only choice our generation will have is whether to leave to our children or to our grandchildren an America totally dependent on foreign oil producers for its national security, economy and way of life.

Maley devotes a large portion of his piece to debunking the myths Graham spins in that statement. But the key takeaway is Graham’s use of “proved reserves” and the purported destruction of those reserves should we embark on a serious course of increased drilling for domestic oil.

Because proven reserves is a fraudulent measure of what we actually have available to us.

As practiced in the U.S., “proved reserves” are a conservative, audited estimate of production that will be produced mostly by existing wells.  The SEC requires that American companies report reserves to their shareholders. “Resources” is the term applied to the quantities that are expected to be found by future drilling. Resources are converted to reserves by drilling (unless politicians, greens and NIMBYs prevent development of resources, which is the subject of another diary…)

Not only that, but most of the reserves in the world are owned by National Oil Companies in Saudi Arabia, Russia, Angola, Nigeria, etc. Their reserves are whatever they say they are, because they are not subject to the SEC rules. And usually they guess high. As a result, the U.S. proportion of the world total deceptively low.

Our policy makers don’t seem to understand that the U.S. is resource-rich, but reserves-poor. That is a result of policy, not a fact of life.

If I told you I would be broke in 5 months, you’d say I was an idiot. And you would be right.

Estimates of proven oil reserves in America indicate we have some 21 billion barrels of oil. But that’s by no means an accurate description of the oil we have. In one field alone, the Bakken play in North Dakota and Montana, the largest driller now estimates there are 20 billion barrels of oil to be had.

Billionaire oilman Harold Hamm told North Dakota bankers on Thursday that government estimates of recoverable oil in the Bakken and Three Forks formations are too conservative.

Hamm, 64, chairman and chief executive officer of Continental Resources Inc., said the formations in North Dakota and Montana hold about 20 billion barrels of recoverable crude, or about five times the amount previously estimated by federal geologists. The formations also hold the natural gas equivalent of 4 billion barrels of oil, he said.

“This is something that is totally incredible,” Hamm told about 200 bankers who had gathered in Bismarck for a conference. “Everywhere you look the Bakken is front and center.”

The United States Geological Survey says Bakken holds 4.3 billion barrels. A North Dakota state study came up with a conclusion of 11 billion barrels. Hamm’s company is using the most current technology in the field and Continental is investing its own money based on those estimates.

Despite the find, domestic onshore oil production was flat over the past year.

Offshore, the facts indicate Graham’s statement is even more farcical and fraudulent. A 2006 Minerals Management Service estimate of oil resources indicates the 20 billion barrel figure shouldn’t be discussed at all as a matter of policy information – because more than double that figure is available just in the Gulf Outer Continental Shelf. 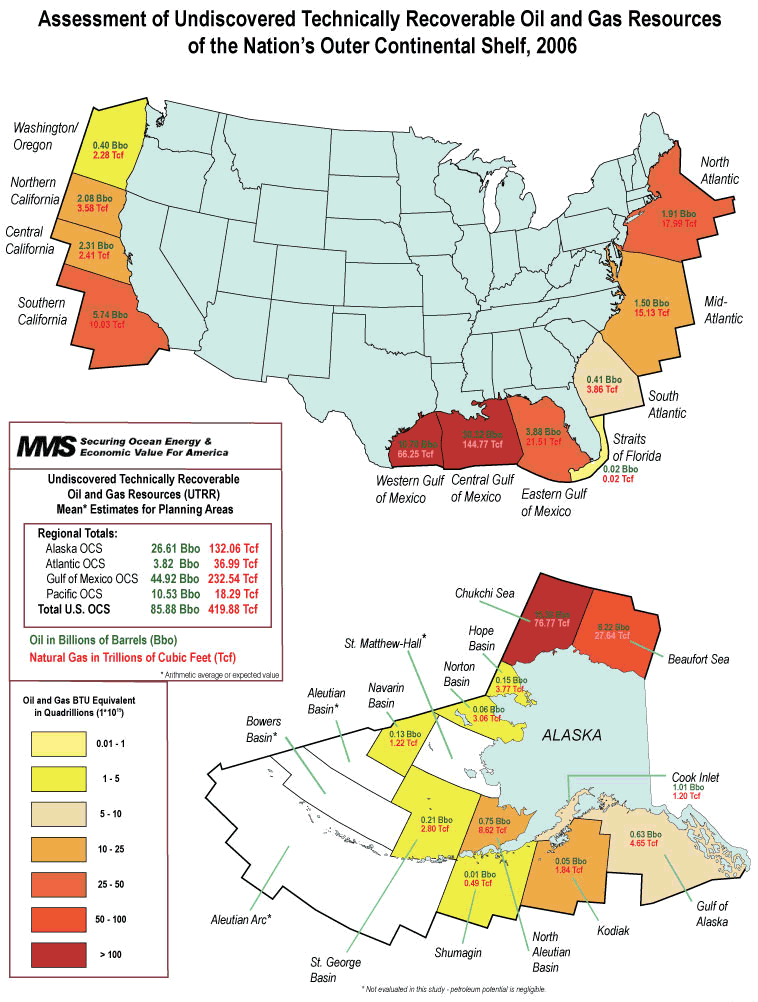 And that’s a conservative figure. The seemingly low numbers on the Atlantic and Pacific OCS are due to the fact that since the federal government put those areas off limits in the 1970’s there hasn’t been any exploration using modern technology to find out what’s available. And with the administration’s decision to pull offshore leases in places like Virginia after the Deepwater Horizon accident, we won’t really know what’s there for a long time. The 50-mile area off Virginia’s coast where leases were pulled is estimated by MMS to hold 130 million barrels of oil; again, that’s using old technology.

It’s because our government has chosen not to produce oil.

Onshore, Bakken isn’t the only area with a large amount of oil. The USGS map which limits the Bakken reserve to 4.3 billion barrels estimates some 48.5 billion barrels onshore, with 10 billion barrels apiece available in the Arctic National Wildlife Refuge area and the National Petroleum Reserve-Alaska, though the estimate of the latter was revised downward for several reasons last year.

In other words, the government’s own estimates – private-sector estimates run much higher in many cases, as the Bakken story indicates – place American oil resources at some 135 billion barrels. And with improved drilling technology, we find more oil all the time – in 1970, American oil reserves were estimated at 39 billion barrels and yet production from 1970-2006 totaled some 102 billion barrels. That math isn’t quite possible unless the reserve figure from 41 years ago was substantially off-base.

But again, the government is choosing not to allow production.

This doesn’t even touch on the gargantuan natural gas resources available to us – natural gas is cleaner than oil or coal and can be used as a transportation fuel very easily; in fact, across the country the conversion to natural gas is happening with fleets of buses, trucks and other vehicles. That will only expand as oil prices continue to rise.

Why would Graham and Democrats like him spout such provable nonsense as a justification of policy? Because the only chance they have of selling the unworkable and uneconomic scam known as “alternative” or “green energy” to the public. Unless Americans believe that we’re out of oil and our only chance to escape the clutches of Saudi and Venezuelan energy hegemony is windmills, solar panels and a tax scheme which forces us to take the bus instead of driving our cars, we will reject their energy policies.

Our real choice isn’t between foreign oil and self-deprivation. We can choose to produce our own energy. We can demand that our oil companies drill using sound industry practices, something the company billing itself as “Beyond Petroleum” failed to do at the Macondo well last year, and the facts show those companies almost uniformly have no problem doing so. But most of all we must base our policy on the facts – and the facts are that good jobs, enormous federal oil royalties, an economic boom and a much healthier trade balance are ours for the choosing.