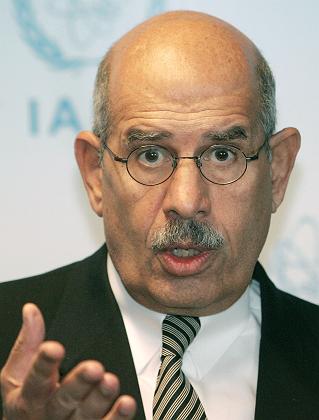 The media narrative surrounding Mohammed El Baradei as the savior of Egypt is beginning to build.

I can’t stress enough how destructive to America’s interests it is for this man to triumphantly ride into power in Egypt, and how tragic his ascension with the support of the Western elites would be.

Let’s remember who El Baradei is. This was the man the UN put in charge of the International Atomic Energy Agency, and who the international community gave a big, wet sloppy kiss to in adorning him with a Nobel Prize in 2005 – supposedly for his efforts in working on Iran’s nuclear program, but more accurately for his role in demonizing the American and British decision to forcefully depose Saddam Hussein from Iraq by military means; El Baradei would later make the charge that in doing so George W. Bush and Tony Blair are responsible for killing one million Iraqis.

Ultimately, El Baradei’s performance in checking Iran’s nuclear advances would be called into immense question – particularly after he called the threat of Iranian nukes “hyped” and said the mullahs wouldn’t have a weapon anytime soon and weren’t actively seeking one. That was in 2009; one year later Iranian defense officials were making statements referencing their capability to “employ a nuclear strategy” in response to American and Israeli military threats.

In other words, as American Jewish leader Malcolm Hoenlein noted today, El Baradei is a “stooge for Iran” who covered up their nuclear advances. Hoenlein’s accusations might be overcharged, but clearly El Baradei’s truthfulness and credibility should be considered questionable in light of his Iranian pontifications.

And that brings us to his statements about the Muslim Brotherhood, to whom he’s been repeatedly linked and who is now backing him as the spokesman for the opposition. El Baradei had this to say to ABC News on that subject…

El Baradei’s statements are ludicrous on their face, and it’s clear he’s attempting to dupe ignorant Americans into a false sense of security about the Muslim Brotherhood, or Ikhwan as it refers to itself.

Let’s not forget that in the Holy Land trial, which was the largest terror financing trial in American history, documents were presented establishing a host of Muslim-American organizations – including the Council on American Islamic Relations, or CAIR – were front organizations for the Muslim Brotherhood. Those documents also outlined the Ikhwan’s goal for itself in America:

“that their work in America is a kind of grand Jihad in eliminating and destroying the Western civilization from within and ‘sabotaging’ its miserable house by their hands … so that … God’s religion [Islam] is made victorious over all other religions.”

El Baradei’s insistence that the Ikhwan is somehow a centrist and secular organization would put him firmly in line with the practice of “taqiyya” – or spreading falsehood among infidels in the name of Allah. If you’ve ever seen CAIR’s operatives on television you’re likely quite familiar with how that works.

For the record, the Ikhwan that El Baradei sells as such a moderate organization has consistently called for the imposition of Sharia law in Egypt.

“All the society accepts sharia law, and accepts it to be applied in a modern manner that respects all ways of life. The matter needs more discussion, but this is very important for us,” al-Aryan said.

A prominent member of the Ikhwan – Sayyid Qutb – wrote an influential Islamist text, Milestones, in 1964 calling for a violent jihad against infidels. The work inspired the creation of virtually every well-known Muslim terror group currently in existence, from Hamas to Egyptian Islamic Jihad to Al-Qaeda. Qutb’s work even influenced the development of the Khomeinist regime which came to power in Iran and subsequently put many of his principles to practice with the formation of Hizbollah in Lebanon, an Iranian proxy.

It should also be noted that another famous Ikhwan figure is Ayman al-Zawahiri, the No. 2 man in al-Qaeda. Zawahiri was an “emir” of Egyptian Islamic Jihad and responsible for merging that organization into al-Qaeda. Zawahiri was arrested by Egyptian government forces for plotting the assassination of then-president Anwar Sadat; another member of the plot, Khalid Islambouli, was not caught by authorities and managed to carry the plot through. Zawahiri was let out of prison in 1984 and subsequently traveled to Saudi Arabia and then Pakistan, where he continued to lead Egyptian Islamic Jihad before rolling it into al-Qaeda in 1998.

In fact, the Muslim Brotherhood’s development after its formation in 1928 was strongly influenced by Nazi Germany. In fact, Hajj Mohammed Amin al-Husseini, Grand Mufti of Jerusalem and a Muslim Brotherhood leader, was a paid stooge of the Nazis who led a series of Arab riots in the Palestinian territories prior to World War II and recruited Muslims as Nazi soldiers during the war. In Egypt, the ties to Nazi Germany were substantial; Karin McQuillan’s American Thinker piece on the historical connection between the Ikhwan and the Nazis is well worth a read on this subject.

So the idea that the Ikhwan is some generic opposition group without an objectionable agenda is a flat-out lie, and a provable lie at that. That El Baradei would offer up such a ludicrous statement on American television doesn’t just reveal the level of disrespect he has for the American people, but also a couple of underlying realities about internal Egyptian politics that should make us nervous.

First, for El Baradei to shill for the Ikhwan in such a forceful manner ought to serve as proof that he’s either one of them or has made common cause with them. This is generally confirmed by the fact that the Muslim Brotherhood has endorsed him as their spokesman.

And second, for him to sing their praises to an American public understandably scared stiff about such an organization shows that El Baradei believes the Ikhwan holds the key to power in a post-Mubarak world. If El Baradei wanted to burnish his credentials as a non-threatening, Western-looking modernizer for his friends in the international community, he’d downplay the Ikhwan as a productive player in the next Egyptian era. But he doesn’t want to do that, because he doesn’t think that will fly internally. Instead he touts the Ikhwan as acceptable to the West despite the loathsome and violent nature of the organization’s history.

If Mubarak’s regime goes, and this man takes the reins in Egypt, the most likely effect will be an Islamist takeover of that country courtesy of the Ikhwan – whether El Baradei sits at the reins or he’s used and discarded the way the “acceptable” revolutionaries in Iran were in 1979. That’s just the reality of the situation. While it is without question exhilarating to see average people in the streets fighting against a dictator, this will not turn out well.