It’s so nice, in fact, that we’re taking this opportunity to hit our readers up for a little spare change.

We’re announcing our spring fundraiser here on the Hayride. As most of our readers know, we’re not going to charge for subscriptions here.

There’s another political website in the state which is actually quite good, but it charges for subscriptions – and the two biggest items it has today are Rodney Alexander’s pro-union vote that drove the building contractors batty and the fact that David Vitter’s Louisiana Committee For A Republican Majority is making a big move toward electing conservatives around the state. If you’ve been reading the Hayride you knew about the latter on Monday and the former on Wednesday.

So no – we don’t charge our readers for our stuff. But we probably could if we wanted to.

Instead, we prefer to do a fundraiser from time to time. And now that it looks like the Cajun Groundhogs out there (OK, OK, I’m coming around to the idea) were right and springtime’s upon us, it’s time.

How much you donate to the site is up to you. But here’s something to think about.

We’re doing an incentive plan as part of this spring’s event. 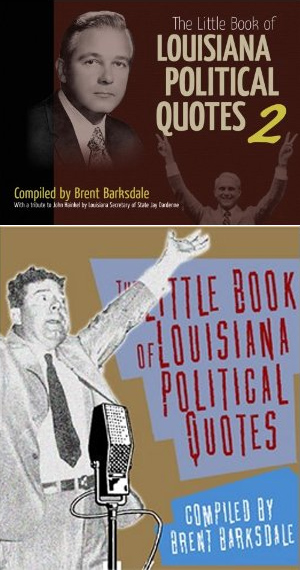 For $50 donations, we’re giving away copies of Brent Barksdale’s The Little Book of Louisiana Political Quotes 2. There’s some absolutely classic stuff in there; if you care enough about Louisiana politics to read this site it’s right up your alley.

For $100 donations, not only are we giving away the newest of Brent’s books but we’re giving away copies of the granddaddy, The Little Book of Louisiana Political Quotes. If you’ve got the whole set you’re now armed and dangerous. Heck, you’ve probably got enough material to run for something on your own at that point. And qualifying’s coming up!

At this point I’d be remiss if I didn’t mention this is a terrific advertising option, too. We had 520,000 page views on this site last month, and Compete.com said we had over 125,000 unique visitors. That was more, according to their numbers, than every newspaper in the state got on their sites outside of the Picayune, Advocate and Shreveport Times. Call those guys and find out what their rates are, then come see us. You’ll laugh all the way to the bank.

But if you’re not in business and you’re not in a donatin’ mood, that’s cool – you can still help. See those Google ads at the top? Pick one and click on it. We get about 40 cents every time you do.

Or if you’re not a PayPal fan, that’s cool. You’re more than welcome to drop us a check in the mail. Send to…

Like I said, any amount you’d like to give is more than appreciated. But we’re giving away free stuff for $50 and $100 donations. And we’re more than happy to accept 3rd-party donations, too – so if you’d like us to send Brent’s books to friends, that’s easily done. If you’re doing it by PayPal, just enter them one at a time and fill in the addresses of the recipients. We’ll sort it out for you.

But in the meantime, we’re going to keep on hammerin’ away. Now that we’re getting comfortable in our new digs here on the site, we’ve got some cool plans for bells and whistles in time for the legislative session later this spring – so stick around, will ya?