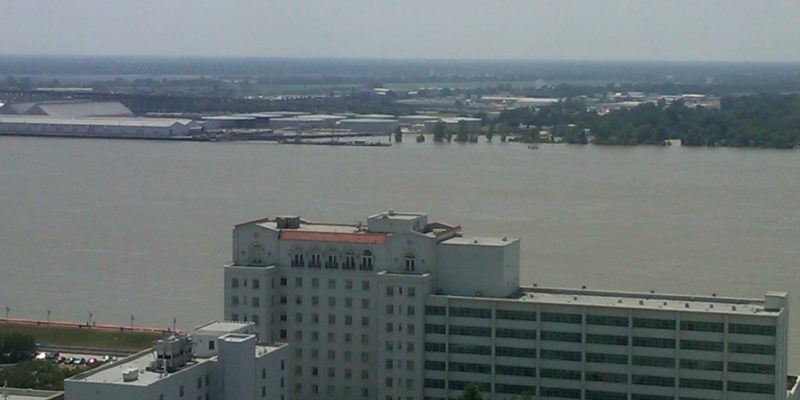 Below you’ll find information from a release out of Gov. Bobby Jindal’s office this afternoon. We can offer a couple of tidbits of information we’ve picked up, plus a few shots of the river from downtown Baton Rouge today (see those at the bottom) – the last day, as it turns out, that anybody will be allowed on the levees as the water rises.

The word is that the Corps of Engineers will open the Morganza Spillway on Saturday. Though it’s disputed by some sources who say the delay in opening Morganza is politically-driven, a report tonight indicates some local public officials are being told the Corps is very concerned that if the spillway is opened it may not be possible to close it. In any event, the river is making the decision for the Corps – because it’s expected that rising water levels will overtop the spillway gates by the end of the day on Saturday anyway, so it’s going to open.

An interesting piece of information, though – the Corps has now said they’ve got 264 bays open at the Bonnet Carre spillway, and opening Bonnet Carre has definitely had an effect. The river at the Carrollton Gauge has dropped from 17.1 feet to 16.8 feet.

Governor Bobby Jindal met today with the Unified Command Group (UCG) of state and federal leaders to get an update on the rising Mississippi River. Later in the day, Governor Jindal traveled to Krotz Springs and Morgan City to meet with local officials and get an on-the-ground assessment of preparedness efforts for the coming flood waters. Governor Jindal emphasized that while the U.S. Army Corps of Engineers has not given a date for the Morganza Spillway to open; state and local officials are taking action now to get prepared and constructing barriers to protect people and property from the flood.

Governor Jindal said, “We’re not waiting for the Corps. We’ve been taking aggressive steps to help our people protect their families, property and livelihoods from the rising river. We don’t have the time to wait for official notice. It’s critical that Louisianians get prepared now to protect their families and homes.”

“The river is 57.9 feet high this morning at the Morganza Structure. The structure is 60 feet high. The Corps told us they would work to prevent any overtopping of this structure before it is opened by possibly increasing the flow through the Old River structure. The Coast Guard is flying one fixed wing a day and one helicopter to check the river flow and locate any hot spots of residents located on the ground.”

The Louisiana National Guard is assisting Krotz Springs and St. Landry Parish Officials by helping to construct two miles of levee to protect a 240-home subdivision, electrical substation and the Alon refinery.

A total of 5,000 feet of HESCOs are currently staged in Krotz Springs.  An additional 5,000 feet are currently being resourced for placement there.  The temporary levee will help protect 240 homes and the Alon Refinery from flooding.

DOTD deployed 50 trucks to haul reclaimed asphalt pavement (RAP) and sand to Krotz Springs in St. Landry Parish to be utilized in the construction of a flood protection barrier. DOTD already utilized approximately 410 cubic yards in RAP materials to build a 300 linear foot base.  HESCO baskets will be placed on top of the newly laid RAP base to construct a barrier wall to protect residents from floodwaters.

In Morgan City – as of last night – LANG crews stretched and filled over 3,240 feet of HESCO barrier and are continuing construction today.  (Total Project increased from 10,000 feet to 11,000 feet.) LANG is prepared to conduct 24-hour operations on this project.

In Amelia, crews placed 600 feet of barrier of the original 2,600 feet required.  (Total Project increased from 2,600 feet to 9,000 feet.) To obtain the additional 7,000 feet of HESCO barrier required by OCPR, Guardsmen will pickup and transport 4,500 feet of HESCO from Lafayette and the Corps of Engineers will provide 3,000 feet.

The Louisiana National Guard expects to complete these projects – a total of 20,000 feet – by May 13th.

Designs for the submersible barge structure in St. Mary call for a total of four barges, 1,000 feet of sheetpile and rocks to complete the closure.  Work is proceeding with the Corps and the CPRA made $1 million available directly to the St. Mary Levee District and the Terrebonne Levee and Conservation District ($500,000 each) for flood-fighting efforts.

The Louisiana National Guard now has approximately 700 Guardsmen mobilized for this emergency. In support of parishes in Northeast Louisiana, Louisiana Guardsmen continue to support efforts to monitor levees, distribute equipment and supplies, and to fortify levees in East Carroll, Madison, Tensas, and Concordia Parishes.

Guardsmen are also assessing areas in LaSalle, Catahoula, and Avoyelles Parishes in preparation for potential backwater flooding. In total, the Louisiana National Guard has assisted in the identification of more than 46 Sand Boils in East Carroll, 20 Sand Boils in Concordia Parish, and 4 Sand Boils in Tensas Parish.

LANG is supporting Coast Guard over-flights of the Morganza floodway and identifying areas of interest to focus infrared radar in order to identify citizens remaining in the easement area.

The National Guard is also providing aviation support to the Vicksburg District Corps of Engineers for levee reconnaissance.

The Louisiana National Guard is prepared to assist with the delivery and distribution of bulk and bottle drinking water as necessary.

Today, the Guard is reviewing Wildlife and Fisheries updated search and rescue plans and synchronizing its contingency plans to augment and complement their effort. Guard aviation, high water vehicles, and boat rescue assets are prepared and ready to support search and rescue, if needed.

DOTD has 151 staff members and 59 trucks and equipment actively deployed in flood prevention efforts. To date, DOTD has hauled 34,700 sandbags and 9,700 cubic yards of sands.

Yesterday in Assumption Parish, the National Guard assisted the parish in assessing the Pierre Part ring levee system and identified areas for a Tiger Dam project.  Today, crews are assisting the parish in assessing levee heights in the vicinity of Bayou L’ourse and will begin installation and construction of the tubes. In Assumption Parish, DOTD has delivered 750 linear feet of HESCO baskets and 36 cubic yards of sand to help fortify the parish’s existing sheet pile wall along La. 663.

CPRA activated contingency contracts for pumping capacity in Terrebonne and St. Mary Parishes.  The Terrebonne Levee and Conservation District is also contracting pumping capacity.  Pumps will on site by this weekend. In Terrebonne Parish, the CPRA is working to establish a levee along nine miles of Highway to prevent backwater flooding.  A combination of HESCOs, dirt, sandbags and other protection features are all being considered.

In New Orleans, limestone and sandbags are being placed near the Natchez Wharf and protection measures have also been put in place to address vulnerabilities in the vicinity of the old Orange Street wharf.  Seepage is also being monitored at the Jackson Barracks.

In Iberville Parish, the Plaquemine Ferry is closed until further notice, due to high water.

In St. Martin Parish, Approximately 450 cubic yards of reclaimed asphalt pavement (RAP), 125 cubic yards of sand and 280 feet of Metalith has was placed by DOTD in its construction of an emergency levee at the Butte La Rose Rest Area. The emergency levee construction will be complete at the end of the week and entail building a levee to limit future flooding in the area. Metalith is a prefabricated steel barrier unit. The emergency levee will be built to the 30-foot elevation mark, which is two feet above the predicted flood elevation.

In East Baton Rouge Parish, DOTD is reviewing options to protect its pump station at the foot of the US 190 Bridge in E. Baton Rouge Parish by constructing a flood protection barrier. Currently, sandbagging efforts have not halted the water seeping into the structure. The flooding or closure of the pump station would require the closure of the U.S. 190 bridge also called the Old Mississippi River Bridge.  Today, East Baton Rouge Parish in coordination with DOTD is starting operations to draw down water in the Capitol Lake in Baton Rouge to increase the water storage for this area and mitigate potential flooding.

To date, DOTD placed 32 Supersack sand bags – large bags holding 1 cubic yard of sand each – and 15 cubic yards of sand on the Downtown Baton Rouge levee to prevent floodwater from flowing into River Road. Approximately 2,000 feet of the northbound and southbound outside lanes of River Road, starting from Third Street to North Street in Downtown Baton Rouge is closed due to high water flood protection and prevention activities. This closure will extend through the duration of the high water event.

A total of 600 offenders will be moved today into the capacity freed up at other facilities yesterday.

DHH continues to closely coordinate with the 16 hospitals identified as at high risk of flooding and seven hospitals at moderate risk to ensure their evacuation plans are in place and any additional assistance they need is provided.

Heritage Manor Nursing Home in Ferriday is transferring 20 bed-bound residents to Glenburney Nursing Home and Adams County Nursing Center, both located in Natchez, MS as a cautionary measure and to prepare for a quicker full evacuation if necessary. The remaining 58 residents are not being evacuated at this time.

DHH is coordinating cemetery recovery operations with other state agencies and local coroner offices, in the event they are needed following the opening of the Morganza Spillway.

DHH is also coordinating with 38 dialysis facilities in the 24 parishes along the Mississippi and Atchafalaya rivers to confirm they are aware of their risk for flooding and sharing pertinent information with their patients who may be affected.

Louisiana State Police met with officials at the Morganza Spillway to evaluate traffic and public safety concerns and to establish an area to stage the State Police Mobile Command Post.

If needed, DCFS would provide support to authorities throughout Concordia and Catahoula parishes to safely evacuate and register citizens who require evacuation assistance and sheltering. They are prepared for 3,000 total evacuees requiring registration there.

DCFS is now also establishing a sheltering “Go-Team” of 12 people to be ready to open a Critical Transportation Needs shelter on short notice.

LED’s Business Expansion and Retention Group contacted 109 companies to date about flood threats and how they can assist with their business needs.

And now, our river pictures at downtown Baton Rouge.

First, from the 21st floor of the Chase Tower (looking across to the Port Of Greater Baton Rouge on the West Bank)… 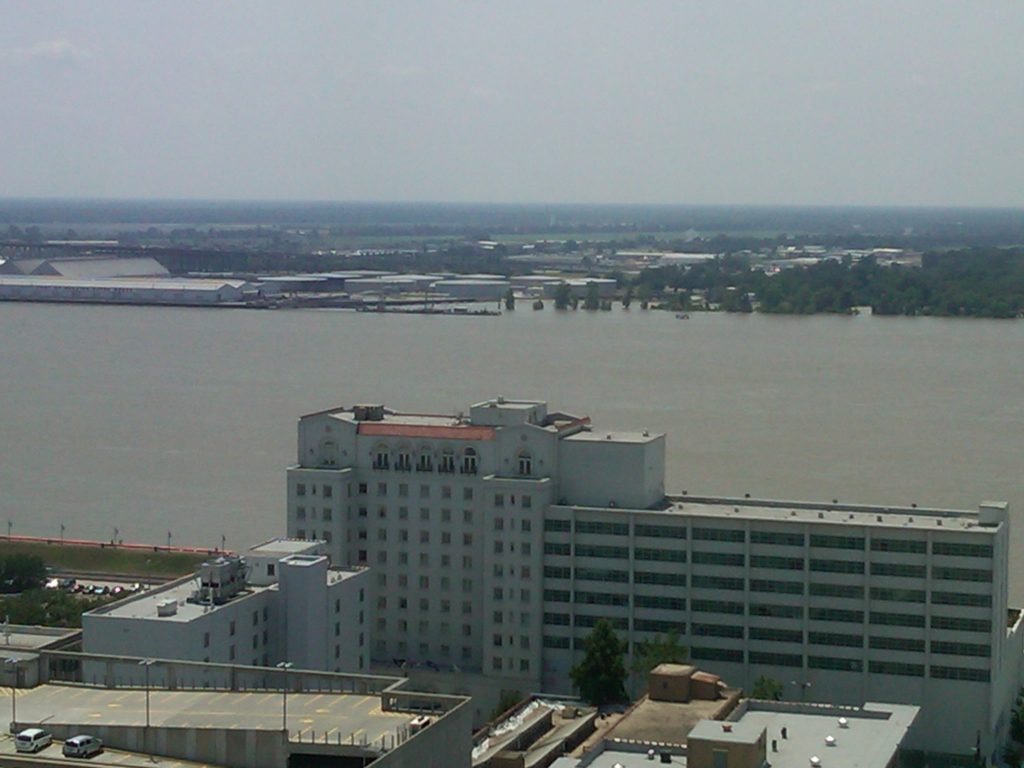 And looking downriver at the levee south of downtown, you can see the water has advanced well past the tree line to nearly the top of the levee… 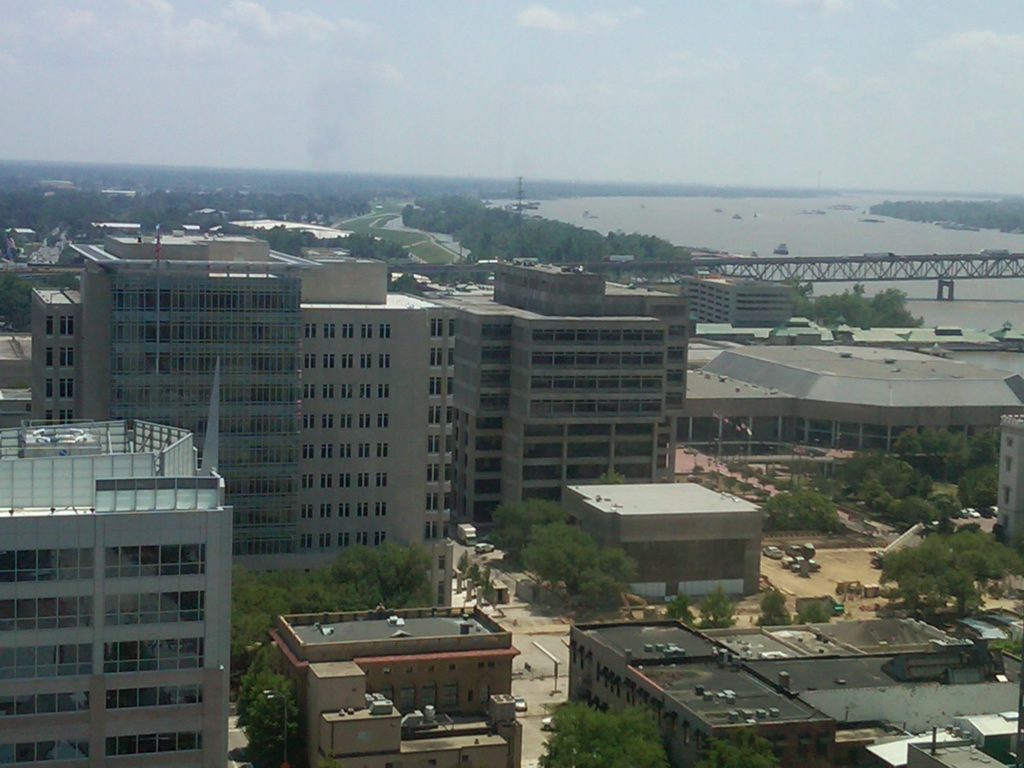 Now from street level, you can see how high that barge on the river is sitting relative to the levee… 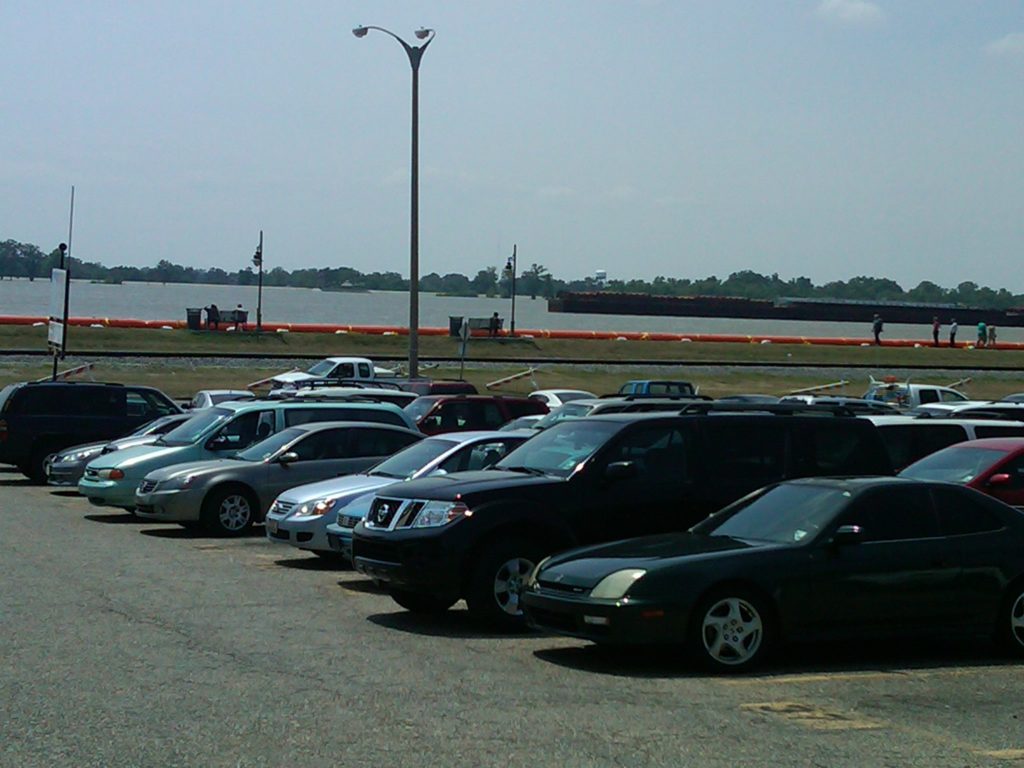 Looking upriver. Those red things mostly underwater are the letters spelling out “Baton Rouge” which usually sit well above the water line.. 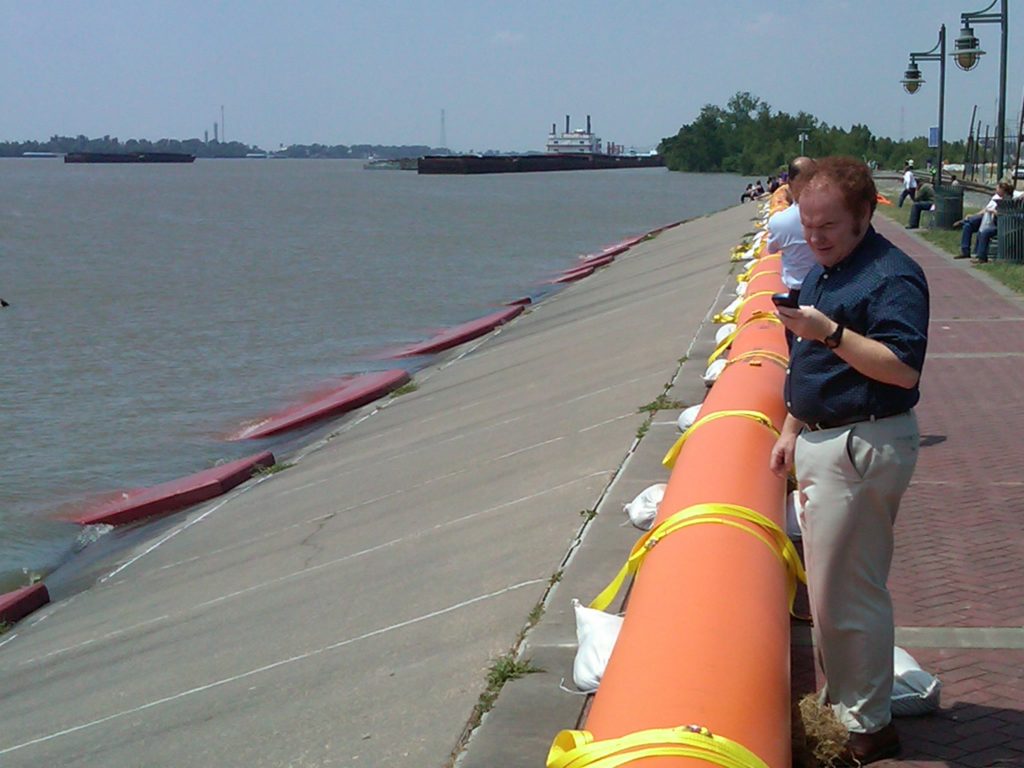 There were a ton of onlookers out in downtown Baton Rouge this afternoon. 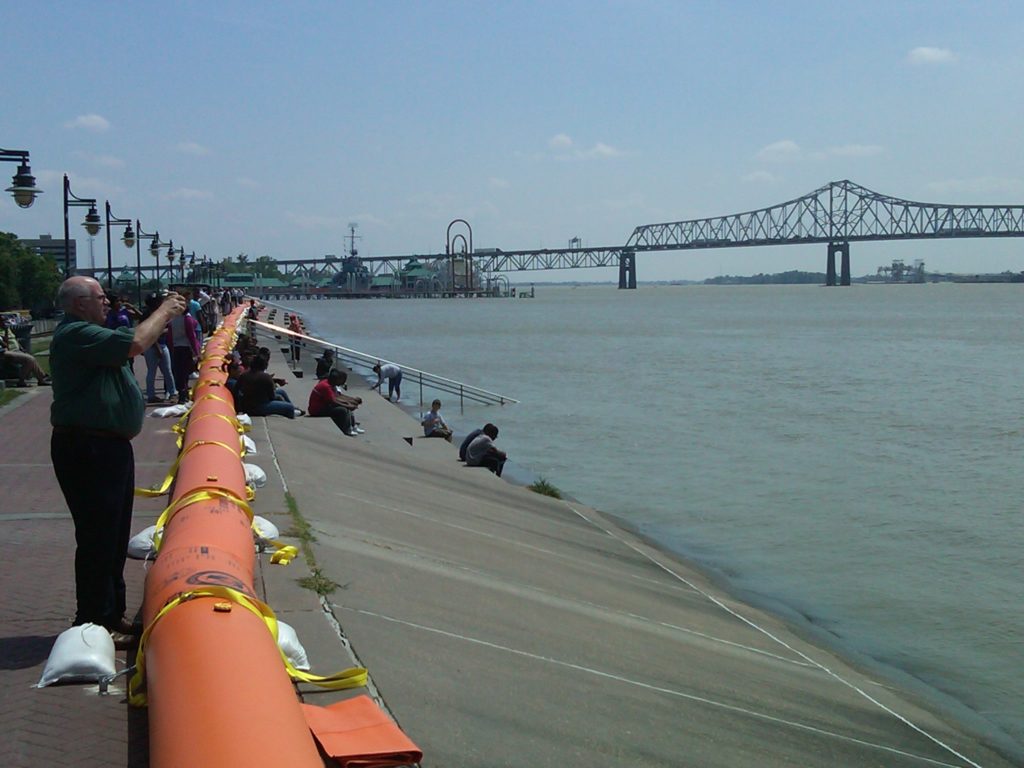