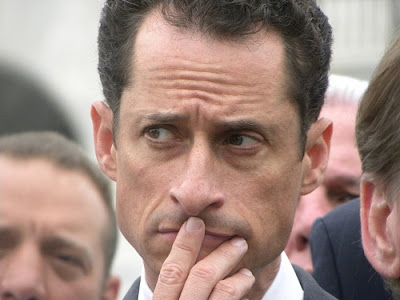 Scott made an editorial decision to just run a bunch of links about Weinergate rather than actually run a piece on it.

I go by his call pretty much whatever he wants to do. But this time, it won’t fly. We HAVE to talk about Anthony Weiner’s weiner.

Well, OK, maybe not that. But yeah – I am talking about that. Not because it’s particularly impressive or anything. Oscar Meyer wouldn’t exactly make a commercial off of it.

I’m talking about it because since this Weinergate business busted out of its drawers on Friday – and yeah, if Weiner wasn’t among the biggest pricks in a Congress so full of pricks you wonder how it’s possible that politicians who are supposed to be good at getting people to like them could produce such a prick as a Congressman in New York City – it has done nothing but get worse.

Scott might not want to go there. I’m already there. The water is fine there.

And here’s the temperature. This is the story, as best as I can put it together. Real simple.

Basically, Weiner has a wife who’s a lot more interesting-looking than he is. He looks like Arnold Horshack. Or this guy, who was in half the movies made between 1981 and 1990. Either way – dork. Or douche. Up to you. But the Misses doesn’t give off that kinda vibe. Instead, she’s more like Rosario Dawson in Men In Black before the wormy-lookin’ dudes get to play Twister with her.

But that’s not quite good enough for Horshack. Instead, he’s got a Twitter account, and he’s got diarrhea of the mouth on Twitter just like he’s got in real life. Guy can’t shut the flock up. And apparently that’s not all he’s got, because after a few less-creepy moments in which he tweeted to her that he was going on Maddow at 5:45 her time and she said he was her “boyfriend,” Weiner’s Twitter account spat out to a coed in Seattle a picture of a scrawny dude wearing a pair of gray briefs sporting a tumescent trouser snake of mediocre length and girth.

I’m no authority on this stuff, mind you. My qualifications include having seen Porky’s on DVD and once in a while inadvertently catching a glance at the next dude in the urinal. I’m just saying – if that’s Weiner’s weiner, your answer is “Yeah, that’s about right.”

So when the picture went out, the blogosphere reacted with “Hey, how about this? We got a sex scandal on our hands involving one of the biggest douchebags in the history of Congress. Not much of a surprise, but let’s play with it anyway and see if we can stir up a scandal that makes him go back to sucking farts out of used car seats.”

And while the guys at Ace of Spades, Verum Serum, Big Government, The Other McCain and Weasel Zippers spent the whole weekend dining out on this deal, Weiner’s people basically spent their time pouring nitroglycerine on the fire. Weiner said his Twitter account got hacked. When a bunch of questions about how that didn’t jive with the facts came out, he lawyered up. Then they said it was a prank. Then Weiner started doing interviews saying this whole thing was stupid and a “distraction,” without actually answering whether it was his dick in that picture – “the American people don’t want to know that, they want to know that the Republicans aren’t going to be able to kill our senior citizens with their zany Medicare plan” and so on.

No, actually, we do want to know if you’re sending Twitpics of your Twitprick, Horshack. You’re the asshat thinks he’s gonna be mayor of NYC in the next election; it’s worth asking if you’re a cross between Elliot Spitzer and Greg Oden. It’s not a distraction; it might have been but for the fact that you’ve been a clown of the first magnitude since you got elected, and as such nothing that happens to you detracts from the “people’s business.” No productive business involves you and none ever has. So when you start sending dick pictures to coeds in Seattle, or following strippers or high school chicks on Twitter and hilarity ensues, it’s no distraction – it’s more like a clarification: as in, this is what happens when you elect an Arnold Horshack lookalike media whore to Congress.

Somebody else out there would call this a “teachable moment.” He calls it a distraction. And that leads to this, which is a classic piece of television. Seriously. This is the dick-joke version of Jack Nicholson’s “You’re-Damn-Right-I-Ordered-The-Code-Red” speech. It just doesn’t get any more damning than this. If Weiner was a Republican, he’d be GONE. But he won’t be gone. He’ll be in that seat forever; or at least until he’s so ruined that district that the population drains away and it gets combined with the one Charlie Rangel or Jerrald Fatbody occupies.

Or, if all of this is too much for you, just watch this.

Look, this stuff is funny as hell. Even if you’re a Democrat you’ve got to see Weiner as a classic example of the douche politician we’d hope doesn’t get elected. And now, he’s gotten himself caught out not simply because he can’t help but show his schlong on the internet, but because he’s incapable of handling the fallout.

It won’t kill this guy, because Democrats don’t die political deaths. They’re immortal, given the right demographics. And they’re well beyond the kind of shame that would pull them out of public life. So he’ll ride the storm out. But that’s great. He’s the new face (OK, he’s the new pecker) of the Democrat Party. And that’s some entertainment all to itself.