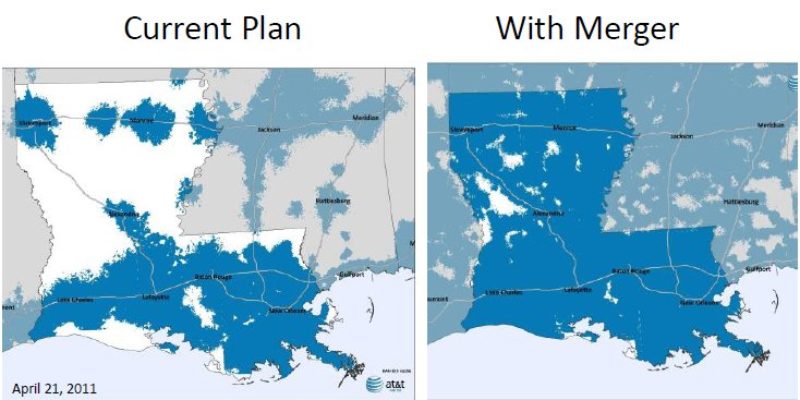 And while Campbell has yet to generate a serious following among the voters – he finished third in 2007 when he last entered the fray – it’s not for a lack of trying. No other member of the PSC is as aggressive in trying to get headlines as “Bananas Foster” is.

And lately, Campbell has been using AT&T as his designated villain, as he’s leading the charge to “scrutinize” the telecom giant’s prospective merger with T-Mobile.

“It’s too big a deal to let it go through without getting everybody’s questions answered, and making sure this is a good deal for the consumer,” Campbell said May 17 after the PSC voted 4-1 to open an inquiry into the proposed merger.

That makes Louisiana one of only four states – California, Hawaii and West Virginia are the others – in which the regulators have demanded to scrutinize the merger. The other 46 have yet to see a problem.

They’ve yet to see a problem because the proposed merger is good for almost everybody involved. Since AT&T and T-Mobile have similarly-engineered networks, combining their forces will allow for a massive expansion of the resulting company’s ability to deliver broadband access where it doesn’t currently exist. That expansion means lots of economic activity and resulting job growth. And as has been the case with virtually every one of the mobile telecom mergers in the past, rates to the consumer are projected to go down.

Campbell’s attempt at halting the merger isn’t even supported by many of the key Democrat constituencies he’ll need if he makes another run at the governor’s mansion. Its current occupant has said ﻿“With this merger, Louisiana communities and businesses, especially in our rural areas, will be able to participate and compete even more in the global economy.” And that sentiment was echoed not just by every major chamber of commerce in the state – which admittedly isn’t a very fertile vote garden for a Longite like Campbell – but such reliable Democrat leaners as the Communications Workers of America, the International Brotherhood of Electrical Workers, the Urban League, the NAACP, the National Conference of Black Mayors and even the International Rice Festival have all come out in favor of the merger.

AT&T is talking about spending $8 billion following this merger to upgrade their 4G network. That’s estimated to put 97 percent of the national population within the resulting coverage, and the rural access in Louisiana that will result is significant. To wit… 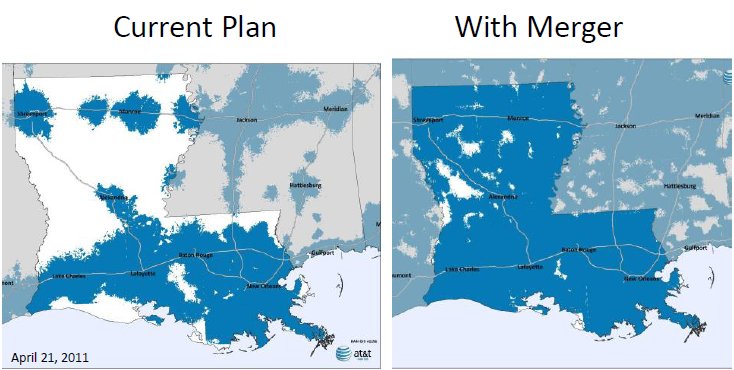 That’s an awful lot of North Louisiana – as in, Campbell’s PSC district and areas close to it – getting picked up.

It’s also, by the way, a response to Campbell’s old gripes against AT&T. For example, on Nov. 5, 2009 he said this to the Ferriday Rotary Club…

“When AT&T and BellSouth merged, I was the only one who didn’t vote for it. They said they would provide high-speed, and we don’t have it. That is no longer a luxury, it’s a necessity.”

Campbell’s inconsistent statements and general self-promoting demagoguery are what they are. What’s disappointing is that he’d find purchase among the other PSC members who should know better.

Going forward, it would be nice if the PSC would take a few things into account…

Hopefully, the other members of the PSC will come to their senses and get their noses out of this merger. As for Campbell, well…