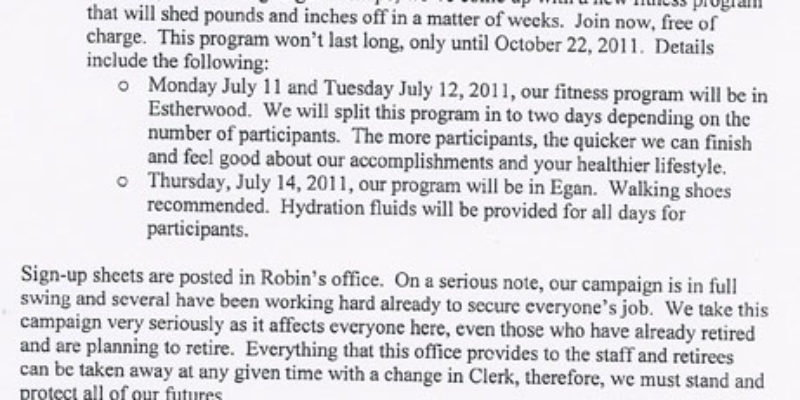 When Huey Long was Louisiana’s governor in the late 1920’s and early 1930’s, and when he ascended to the U.S. Senate and left his flunky O.K. Allen in the governor’s mansion, one of the more obnoxious manifestations of political abuse was the “deduct box” in which he collected the forced contributions of state employees.

The hagiographic Huey Long.com site has a more detailed description…

What was the Deduct Box?

Most state employees who received a job from Long were expected to contribute to his campaign fund, which was kept in a locked “deduct box” at his Roosevelt Hotel headquarters in New Orleans.

Without a base of wealthy political contributors, Huey reasoned that this was an appropriate source of funds for his political activities. He refused to take the usual bribes offered by business in exchange for their support, and he was frequently in need of cash to print circulars and travel the state to advocate for his programs and combat negative press.

According to historian T. Harry Williams, Long collected between $50,000 to $75,000 each election cycle from state employees, contrary to exaggerated reports that he collected a million dollars per year.

Few employees complained about the deducts, because jobs were scarce. They knew they would lose their jobs if Long lost his.

Huey did not personally enrich himself with these funds and had surprisingly little money to his name when he was killed. The deduct box was never found and is believed to have been stolen by one of his associates.

The deduct box has come to represent the worst of Louisiana’s old-time politics. So it’s perhaps good news that no allegations of a deduct box has surfaced in what’s otherwise a pretty sordid little scandal brewing in the Acadia Parish courthouse.

Walter Pierce at the Lafayette Independent has the story…

Talk about team spirit: Employees of the Acadia Parish Clerk of Court’s Office are getting in shape compliments of their employer. The office’s “Get Fit Program” is detailed in an inter-office memo distributed July 8 by Chief Deputy Clerk Blane Faulk that came to us by a source. The program, Faulk writes, “will shed pounds and inches off in a matter of weeks.” Best of all, according to Faulk, the program is free.

This sounds like a pretty awesome team-building effort and means of helping ensure the health of employees. But it isn’t.

The “Get Fit Program” the chief deputy trumpets entails employees hitting the pavement and campaigning door-to-door for the re-election of their boss, Clerk of Court Robby Barousse — in Estherwood and Egan July 11 to 14, to be specific. In the swelter of a Louisiana summer, to be dramatic. But fear not: “Hydration fluids will be provided for all days for participants,” Faulk adds reassuringly.

The memo leaked out courtesy of some rightfully indignant employees, and we’ve got a copy of it here for your readers to view in PDF format – and here’s a JPEG image… 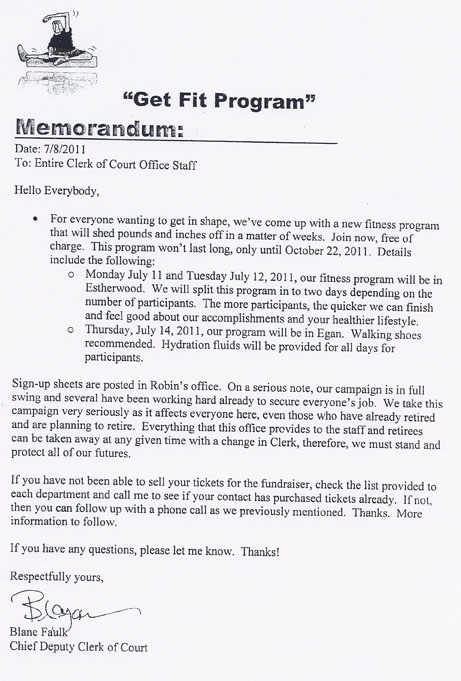 As Pierce notes, two very ominous items show up in the memo after the cute joke about canvassing as a fitness program. First is the “save everybody’s job” reference, and second is the “sell your tickets for the fundraiser” reference. Both indicate a totally corrupt regime at the Acadia Parish Clerk of Court.

Turns out that the Acadia Clerk’s office is a family fiefdom going back decades. There has been a Barousse in charge of that office for some 50 years, with three generations of Barousses holding the Clerk of Court job, and seldom if ever in that time has there been a contested election. The current occupant of the office, Robby Barousse, blew into office unopposed in 1999. Turns out that Barousse’s father Andy, who had held the job without getting any opposition since at least 1983, pulled out of a race for re-election at the last minute as Robby entered it. In other words, Andy passed the job down to his son in classic fashion.

Robby Barousse has never had any opposition. He was re-elected without challengers in 2003 and 2007.

This year, though, Crowley businessman Larry Lege, a Republican, jumped into the race. And that’s set the Powers That Be at the courthouse, in front of which you’ll find a bronze bust of Edwin Edwards (let’s not forget that the courthouse gang in Crowley had invited EWE to serve as the grand marshal of this year’s Crowley Rice Festival while he was still in federal prison) into convulsions.

Pierce says the Barousse mob might have problems beyond Lege’s challenge thanks to the “fitness program,” though he can’t be sure…

But is it ethical? Specifically, does it violate the Louisiana Code of Ethics?

Part B of Section 1116 of the code, subtitled “Abuse of Office,” reads in part: “No public servant shall use the authority of his office or position, directly or indirectly, in a manner intended to compel or coerce any person or other public servant to engage in political activity. For the purposes of this Subsection, ‘political activity’ means an effort to support or oppose the election of a candidate for political office in an election.”

But duty is in the eye of the beholder. Are Barousse’s employees being compelled or coerced into politicking for their boss? Is it their duty to canvass for his re-election and sell fundraiser tickets? Would the state Board of Ethics find fault in Chief Deputy Faulk’s epistle? Not unexpectedly, the board is frustratingly circumspect.

We sent a copy of the memo, with names and locations redacted to keep the discussion on “general terms,” to Communications Director Alainna Giacone, who consulted Chief Administrator Kathleen Allen.

“[Allen] doesn’t know before something like this actually goes before the current board, how they would interpret it,” Giacone says, speaking for her boss. “Would they say this is a clear case of someone being compelled or coerced? She would be hesitant to comment on this specifically unless it actually came before the board and she actually got some guidance from them and opinion from them.”

Even if the board took up the matter, it would be mum until an investigation was concluded and charges, if any, were filed. But the board may yet look into this “Get Fit Program.” Lege says he plans to file a complaint with the Board of Ethics through his re-election committee.

“I don’t know why I feel like I’m the one that needs to step up and challenge this,” Lege says. “Nobody in Acadia Parish wants to mess with this.”

Faulk, who authored the memo, resorted to the classic defense…

In a written response emailed Monday afternoon to The Independent, Faulk insists that campaign activities by clerk’s office employees “are strictly on a volunteer basis, and no one here is required to participate in campaigning or to do anything outside of the scope of their employment. Fortunately, however, many do.”