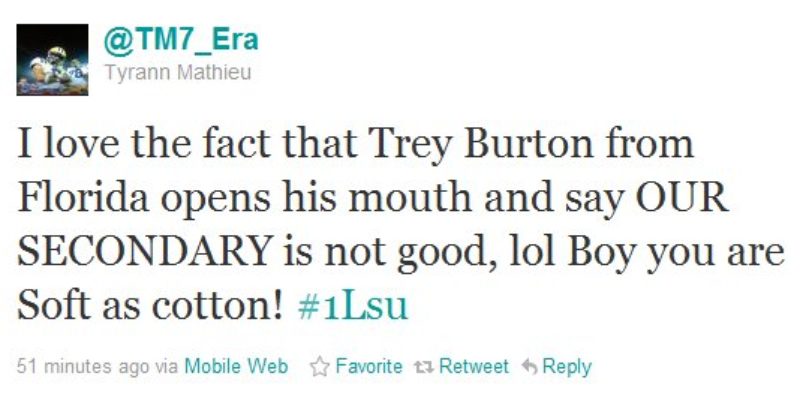 We give you Florida’s running back/quarterback/fullback/no-longer-available-for-interviews Trey Burton, who accounted for all of 21 yards on 10 plays he had a hand in while LSU was beating the poo out of his team 41-11 yesterday…

Trey Burton says Alabama defense tougher than LSU
Florida’s run game has slipped considerably in the past two weeks, but facing two of the best defenses in the country will do that do a team. After LSU held the Gators to a season-low 213 yards, running back Trey Burton was asked about the Tigers’ secondary.

“They’re not as good as advertised,” he said. “I think the D-linemen and front seven is really, really good.”

For all the attention given to standout CB Tyrann Mathieu, who had his second interception of the season on Saturday, the stats back Burton up. LSU ranked ninth in the SEC in passing defense and eighth in interceptions entering the game.

Burton was also asked to compare the two defenses. (It seemed the reporter is working on something in advance of the team’s Nov. 5 matchup, which many think will determine which team plays for a national championship.)

“Alabama’s hands down a lot better. A lot more physical, just tougher guys,” Burton said. “If I had to pick one to not go against, it’d definitely be Alabama.”

By the way, LSU is now fifth in the SEC in passing defense and tied for fourth in interceptions. That’s what playing Florida does for ya.

Burton threw two passes when Florida put him at quarterback against LSU, one of which was complete for six whole yards. He ran the ball five times and got seven whole yards for a mighty 1.4 yard average. And he caught three passes for – whoa! – 14 whole yards. Just a nosehair short of five yards a catch.

Impressed? No? How about that.

Burton did diddly poo against Alabama last week. He threw a pass for three yards. Never carried the ball, never caught a pass in that game.

Maybe he got a good view of his teammates getting whacked by Alabama. Or maybe he’s seen his team get their ass kicked so many times in the last year and a half that he’s an expert on the subject.

But he says Alabama’s defense is better than LSU and LSU’s secondary is overrated.

In this case, the Honey Badger does care. At least enough to throw something out on Twitter LOL’ing at Burton and his big fat mouth…

My uncle T-Claude, who got himself arrested in Gainesville back in 2006 for peeing on the Hare Krishnas outside the stadium after that awful game last year, told me this morning that he thinks Florida will never beat LSU again while Will Muschamp is their coach and Les Miles is ours.

I think he’s right. I think Muschamp’s a dope. Although Muschamp can’t really be blamed for Burton, since Urban Meyer – who I notice hasn’t been on my TV too much this weekend – was the guy who recruited him. He still put the kid out there and gave him lots of opportunities to do diddly poo against LSU’s overrated defense yesterday.

Florida used to be a pretty fearsome group. Now? Even their fans aren’t fearsome. Uncle T-Claude said he got one of them to go fetch him a sammich at the tailgate yesterday before the game.

Interested in more national news? We've got you covered! See More National News
Previous Article No, Don’t Do This…
Next Article Heh.