That would be this young lady. 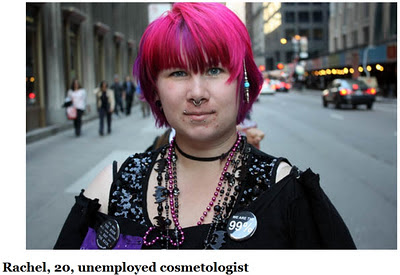 Amazing that she can’t get paid to do people’s hair or makeup, right? Tough times.

A question – has anybody in Rachel’s whole life ever held her accountable? This is just a theory, and maybe I’m way off base here, but I’m thinkin’ that if anybody ever had done that she probably wouldn’t have a face full of metal and hair that looks like she got in a fight with a barrel of food coloring and lost.

It’s possible – possible, mind you – that maybe Rachel wouldn’t be an unemployed cosmetologist if she didn’t look like shit. Usually, if you’re in a profession where your job is to make other people look good it works better in the job interview if you can demonstrate that you’re capable of making yourself look good.

Nope. Gotta be those Jew bankers. But at least she’s gonna hold them accountable.