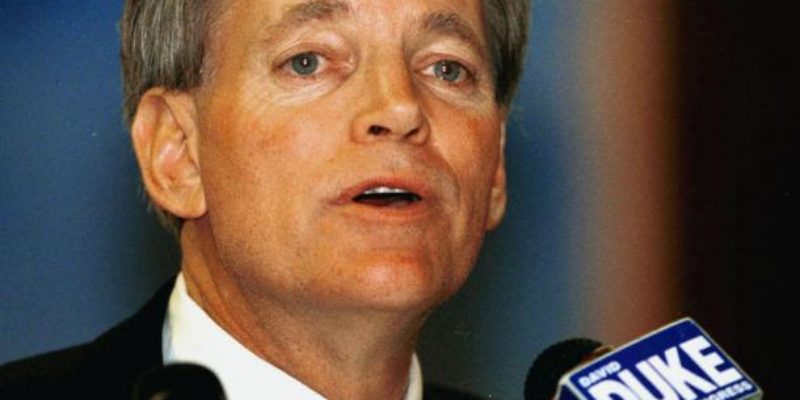 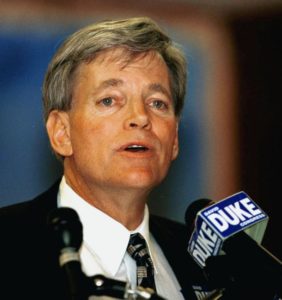 David Duke, former Grand Wizard of the Knights of the Ku Klux Klan and all-around embarrassment for anyone from Louisiana, was recently arrested in Cologne, Germany while in route to speak to a German nationalist group.

It seems that the Germans don’t really have the First Amendment rights that we enjoy in this country and aren’t really too cool about nuts trying to rile up crowds against Jews after that whole Hitler and the Holocaust thing.

It should be remembered that Duke loved to run around as a LSU student dressed like Hitler.

More recently, he has come out in support of the Occupy Wall Street movement.

Let’s see, the occupiers are supported by Duke, The American Nazi Party, Communist Part USA and Hezbollah–who would like to kill all Jews and Americans–among others. You shall be known by the company you keep.

Duke is out of jail now and is busy asking for money on his website to help him fight legal charges overseas:

“As much as I would like to, I can’t just go back to Louisiana right now as I have to fight this improper action against me and our brothers and sisters. I just can’t turn my back and run away, no matter how comfortable it may be for me to do so. My duty is to stand up for my rights and that of the European people.”

Wow, my checkbook is out for this freedom fighter —NOT.

When Louisiana makes international news, you can bet your swastika that it’s not going to look good for our state.

Interested in more national news? We've got you covered! See More National News
Previous Article Allen West: Herman Cain Needs To Get Out Of The Race
Next Article Feinberg Finds More Cash For Shrimpers, Crabbers From BP Till