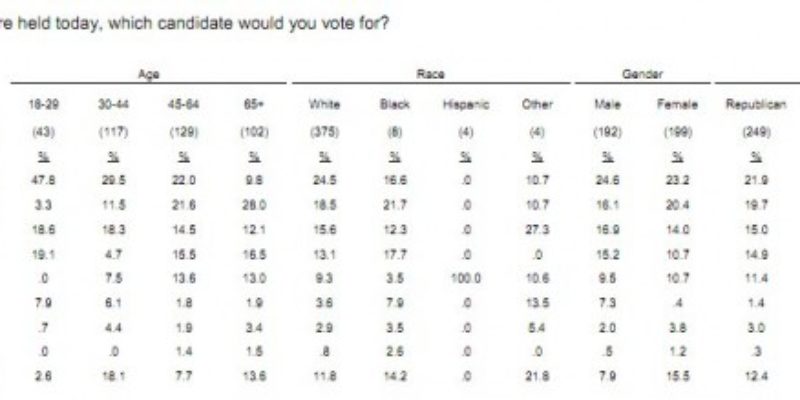 This one’s from Insider Advantage, and it’s a poll of about 400 Iowans from yesterday.

It’s not a big sample, so before we draw too many ironclad conclusions from this thing we probably ought to see a few more polls.

That said, when you’ve got five candidates pulling double-figure vote totals you’ve got yourself a wide open race.

And it does begin to look like Perry has a path to the nomination.

If he can get ahead of Michele Bachmann in Iowa, Bachmann is finished. Where does Bachmann’s vote go? She doesn’t command much more than five percent or so, but even if Bachmann does what some people say she’s going to do and backs Romney one would imagine that vote wouldn’t follow her. That means some to Gingrich and some to Perry.

Ditto for Santorum, whose campaign just isn’t taking off and probably can’t survive past Iowa if he’s not able to perform better than this poll shows – and unless Bachmann withdraws and folds her campaign into Santorum’s, which isn’t likely – he doesn’t have a path to the nomination. Santorum’s voters are mostly social conservatives with some mainstream conservatives thrown in. Between Perry, Romney, Gingrich and Paul you’d figure Perry would pick up more of Santorum’s people.

Huntsman isn’t going anywhere, at least not until after New Hampshire and since it looks like he’ll be in the top three there and he’s got more personal money than Croesus one can expect him to stick around. Huntsman’s record isn’t dissimilar to Perry’s, though his campaign and his rhetoric sounds more like Romney’s. For now, he would probably pull support from Romney.

Ron Paul will hang in this race for a while, but he’s going to perform below polls in New Hampshire, South Carolina and Florida and after those are over he’s likely to fade from the scene. Paul’s voters aren’t Republican voters; they’re Ron Paul voters. When he’s not in the race they no longer really count.

And then there’s Gingrich. Gingrich has raised a lot more money of late, and that could well help him sustain his campaign. But if he polls below Perry in Iowa, it’s a decent bet that voters in South Carolina and Florida, where he looks strongest, might start looking around.

Never mind that Romney has been running for office for 17 years and has won precisely one election in that time period. He’s electable.

The GOP electorate, who will vote for Romney if it has to, generally speaking would prefer not to. It doesn’t like Romney, because it sees him as a guy who will say anything to get elected and who has excuses rather than accomplishments arising from the four years he did spend in elected office. It has no idea what his core convictions are and it has a very hazy view of what a Romney presidency would look like other than it would beat another term of Obama – just about anything would, after all.

So there’s a good 60 percent of the GOP electorate out there. And if the minor candidates melt away, and if Gingrich’s slide continues, then the long-awaited Perry comeback opportunity could come to fruition. At 15 percent this is the best he’s looked in the polls, so there’s a trend potentially building.

Today’s endorsement from many of the key contributors at RedState might help the Perry effort. He’s making some web ads that look pretty good, though that 42-city, 14-day bus tour of Iowa he’s currently on – complete with Bobby Jindal doing some stumping for him – will probably do him more good.

What else might help Perry is this news about how he had back surgery right before he started doing the debates and the fact he was in pain a lot during September, when he tanked that lead he had upon entering the race…

“If there’s one thing I could have changed in my campaign I would have moved that surgery I had the first of July back to January,” Perry said Tuesday on Sean Hannity’s radio program. “I didn’t realize it was going to have as big an impact and frankly I didn’t know the impact it was having on me from the standpoint of just being fatigued and it showed up in the first few debates.”

That might be an excuse, but he’s definitely been improving in his debate performances the last couple of times out and it did appear during the worst of the bad debate outings that Perry especially fell off badly toward the end. Standing up at a podium for over an hour at night after you’ve been on your feet all day when you’re still recovering from an advanced spinal fusion using adult stem cells might understandably make you come off a little less impressively than you’d hope.

Again, this is all tremendously subjective conjecture right now.

But if Gingrich’s numbers are tanking, it doesn’t mean Romney benefits. Romney can’t get above 25 percent, and that 25 percent figure starts looking a lot worse when the race only has 3-5 candidates in it than it does when there are eight. This thing might just fall to Perry after all.