Louisiana’s plan to keep from going bankrupt ahead of Obamacare adding an estimated 353,000 people to state Medicaid rolls —the Coordinated Care Network (CCN) you might have heard about–is being rolled out. 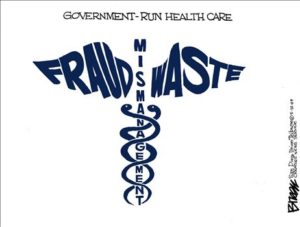 The program is called Bayou Health. In the program, 890,000 Medicaid recipients will have to sign up with one of five private healthcare providers that will be paid with government money in hopes that recipients will lead healthier lives to reduce government spending on health care.

In case you are confused by this, maybe this clear thing up a little for you:

Obamacare, if it’s not repealed or shut down by the U.S. Supreme Court, cannot be paid for by Louisiana without cutting vital services to people who count on the government to pay their medical bills.

This fiscal year, Medicaid spending is estimated to be $398.6 billion, an increase of 10.1 percent over last year. Stimulus money and other funding that has been helping Louisiana pay the poor’s hospital bills is drying up and the bad economy has only added to the state’s Medicaid rolls.

Obamacare will go into effect in 2014 and is expected to cost Louisiana over $7 billion in the first 10 years. Remember, cost estimates for entitlement programs are always low and Medicaid is already expected to grow by more than 50 percent over the next two years.

When Obamacare kicks in, people earning as much as 138 percent above the poverty level will be eligible for Medicaid. In some of Louisiana’s more rural parishes, that’s just about everybody.

What do you think might happen when people who are on company’s healthcare plans that don’t now qualify for free healthcare will do when they discover they will be able to qualify? There are gonna be a whole lot more people that will be having their medical bills paid for by the government in just a couple of years and the money just isn’t there.

To help fix the problem, Louisiana is counting on the CCN system that is initially being implemented in the parishes of Orleans, Jefferson, St. Bernard, Plaquemines, Livingston, St. Helena, St. Tammany, Tangipahoa and Washington. The program will be statewide by June.

Eligible Medicaid recipients will be sent out letters giving them the choice to have their healthcare managed by one of five health insurance companies –Amerigroup Real Solutions, Community Health Solutions of Louisiana, LaCare Louisiana, Louisiana Healthcare Connections and United Healthcare. If they don’t choose a provider, one will be chosen for them.

Two thirds of the states Medicaid recipients–the ones considered to be the most healthy–will go into the CCN which will over see $2.2 billion in Medicaid spending.

The dirty little secret that people I have spoken to in the healthcare industry have told me is that those people only account for 30 percent of overall spending in Medicaid.

The idea is that these companies will save the state by taking those that fall into the bottom 30 percent spending category and incentivize them to live healthier lives by offering them things like coupons for Weight Watchers meetings and discounts on hypoallergenic bedding.

No really, that’s the plan.

Community Health offers its “Healthy Habits, Healthy Rewards Card” — a prepaid debit card that gets reloaded with varying amounts of money for those who exhibit healthy habits such as up to $30 upon a first doctor’s office visit, $10 for adult wellness screenings, $10 for parents-guardians of children and adolescents who get yearly well child visits and $10 for diabetics who get blood screening yearly. The plan also offers 24-7 on-call nurses.

LaCare Rewards provides $25 in free over the counter products mailed to member households for such things as if diabetics get regular eye exams and blood checks as well as blood pressure and other yearly tests; up to $75 in prenatal-maternity items for pregnant mothers who meet certain plan milestones; and $15 per child in products for parent-guardian of children who get yearly well-child checkups.

Louisiana Healthcare offers bonus rewards on a personal prepaid account — up to $30 for regular, annual child checkups, $10 for each adult wellness screening, $10 for pregnancy visits and $20 for managing diabetes. The firm also advertises personal helpers for assistance with access to care, choosing a doctor, transportation, food, clothing or housing.

UnitedHealthcare offers $20 gift cards for members who complete a primary care physician office visit within 90 days of enrollment and for well-child visits at ages 3, 4, 5 and 6.

This is plan “A” to blunt the harm that Obamacare will do. There isn’t really a plan “B” yet, but I predict it’s coming.

The government will be able to mandate the way you live your life under the pretext that your life is burdening others by unnecessarily sucking money from healthcare, that’s what.

Say goodbye to person freedom, you slobs. That is what I believe the real goal of Obamacare has always been anyway.

Imagine the thought that you have to bend to their ways or face the prospect of them sending this New Orleans native to your house. The future looks bleak: