…so it’s time to talk about one of my favorite LSU presidents – since he’s topical, that is. 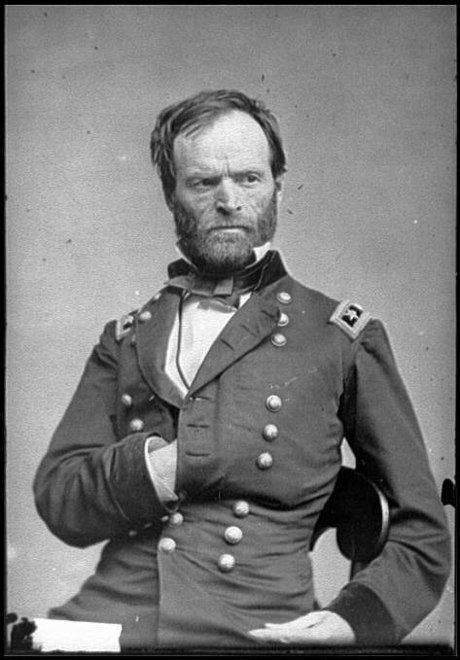 William Tecumseh Sherman (February 8, 1820 – February 14, 1891) was an American soldier, businessman, educator and author. He served as a General in the Union Army during the American Civil War (1861–65), for which he received recognition for his outstanding command of military strategy as well as criticism for the harshness of the “scorched earth” policies that he implemented in conducting total war against the Confederate States.[1]Military historianB. H. Liddell Hart famously declared that Sherman was “the first modern general”.[2]

Sherman served under General Ulysses S. Grant in 1862 and 1863 during the campaigns that led to the fall of the Confederate stronghold of Vicksburg on the Mississippi River and culminated with the routing of the Confederate armies in the state of Tennessee. In 1864, Sherman succeeded Grant as the Union commander in the western theaterof the war. He proceeded to lead his troops to the capture of the city of Atlanta, a military success that contributed to the re-election of PresidentAbraham Lincoln. Sherman’s subsequent march through Georgia and the Carolinas further undermined the Confederacy’s ability to continue fighting. He accepted the surrender of all the Confederate armies in the Carolinas, Georgia, and Florida in April 1865.

When Grant assumed the U.S. presidency in 1869, Sherman succeeded him as Commanding General of the Army (1869–83). As such, he was responsible for the U.S. Army conduct in the Indian Wars over the next 15 years, in the western United States. He steadfastly refused to be drawn into politics and in 1875 published his Memoirs, one of the best-known firsthand accounts of the Civil War.

In 1859, Sherman accepted a job as the first superintendent of the Louisiana State Seminary of Learning & Military Academy (which later became Louisiana State University) in Pineville, Louisiana, a position he sought at the suggestion of Major D. C. Buell and secured because of General George Mason Graham.[25] He proved an effective and popular leader of that institution, which would later become Louisiana State University (LSU).[26] Colonel Joseph P. Taylor, the brother of the late President Zachary Taylor, declared that “if you had hunted the whole army, from one end of it to the other, you could not have found a man in it more admirably suited for the position in every respect than Sherman.”[27]

On hearing of South Carolina‘s secession from the United States, Sherman observed to a close friend, Professor David F. Boyd of Virginia, an enthusiastic secessionist, almost perfectly describing the four years of war to come:

You people of the South don’t know what you are doing. This country will be drenched in blood, and God only knows how it will end. It is all folly, madness, a crime against civilization! You people speak so lightly of war; you don’t know what you’re talking about. War is a terrible thing! You mistake, too, the people of the North. They are a peaceable people but an earnest people, and they will fight, too. They are not going to let this country be destroyed without a mighty effort to save it… Besides, where are your men and appliances of war to contend against them? The North can make a steam engine, locomotive, or railway car; hardly a yard of cloth or pair of shoes can you make. You are rushing into war with one of the most powerful, ingeniously mechanical, and determined people on Earth—right at your doors. You are bound to fail. Only in your spirit and determination are you prepared for war. In all else you are totally unprepared, with a bad cause to start with. At first you will make headway, but as your limited resources begin to fail, shut out from the markets of Europe as you will be, your cause will begin to wane. If your people will but stop and think, they must see in the end that you will surely fail.[28]

In January 1861, as more Southern states were seceding from the Union, Sherman was required to accept receipt of arms surrendered to the State Militia by the U.S. Arsenal at Baton Rouge, Louisiana. Instead of complying, he resigned his position as superintendent and returned to the North, declaring to the governor of Louisiana, “On no earthly account will I do any act or think any thought hostile … to the … United States.”[29]

After the war, General Sherman donated two cannons to the institution. These cannons had been captured from Confederate forces and had been used to start the war when fired at Fort Sumter, South Carolina. They are still currently on display in front of LSU’s Military Science building.[30]

The quote, which rankles to an extent voiced in Southern ears, was nevertheless prophetic. The war did go badly.

As it happens, it made him topical. Sherman went to Georgia as well.

The lesson of the March To The Sea? Don’t pick a fight you can’t win. Because the consequences will be more than you can bear.

Or, in another context, don’t run your mouth when somebody’s coming who’s a lot bigger and stronger than you are.

Interested in more national news? We've got you covered! See More National News
Previous Article To Every Action There’s A Reaction…
Next Article He Takes What He Wants.