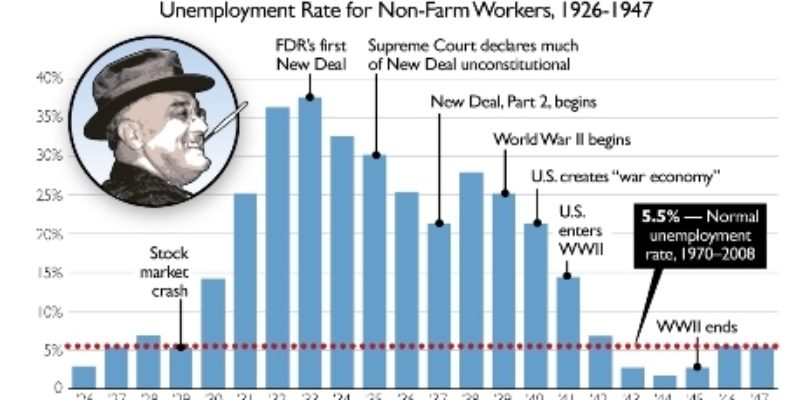 Rev. Jesse Jackson was on Fox News this morning to give his opinion on how to fix the economy—by implementing government programs a-la Franklin Delano Roosevelt’s New Deal—which saved the nation from the Great Depression, according to the leftist narrative.

It’s remarkable to witness the mental gymnastics as Jackson works the LSU-Alabama bowl game into the clip to make his argument about government expansion in the economy, but following his train of thought is always something of a challenge.

You can be sure that wherever it goes, it will always end up in government making our lives better. One of the things Jackson said he wants is for the government to pay to build high-speed railroads to get people to jobs that don’t exist in the Obama economy.

Also remarkable, though not surprising, is that progressives like Jackson are still using the myth that New Deal policies got us out of the Great Depression to make the case that we need more of the same to cure today’s economic woes.

A good rule-of-thumb to go by when trying to estimate what the truth really is when listening to people like Jackson is to remember that is that’s it’s usually exactly the opposite of what they are saying. 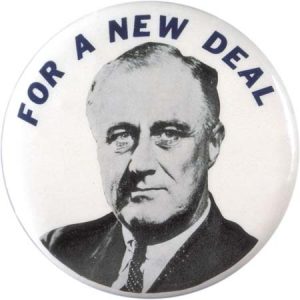 The truth is that the New Deal did nothing to get the nation out of the great depression and, in fact, prolonged the economic misery.

You need to look no further than unemployment numbers of the times.

Unemployment was around 15 percent before the disastrous Smoot-Hawley Tariff Act of 1930, under President Herbert Hoover, and stood at 20 percent by the time FDR’s New Deal policies were in place in 1938.

The New Deal myth is predicated on the notion that Hoover’s laissez-faire policies after the stock marker crash of 1929 were responsible for the nation being plunged deeper into depression and FDR had to come riding in on a white expansionist horse to save the country.

Well, Hoover did make things worse, but not by keeping the government’s hands out of the economy. If Smoot-Hawley Tariff Act of 1930–which effectively shut-off  U.S. borders to foreign goods–wasn’t bad enough, Hoover turned to massive tax increases and really made things bad.

From the Ludwig Von Mises Institute:

The range of tax increases was enormous. Many wartime (World War I) excise taxes were revived, sales taxes were imposed on gasoline, tires, autos, electric energy, malt, toiletries, furs, jewelry, and other articles; admission and stock transfer taxes were increased; new taxes were levied on bank checks, bond transfers, telephone, telegraph, and radio messages; and the personal income tax was raised drastically as follows: the normal rate was increased from a range of 1 percent to 5 percent, to 4 percent-8 percent; personal exemptions were sharply reduced, and an earned credit of 25 percent eliminated; and surtaxes were raised enormously, from a maximum of 25 percent to 63 percent on the highest incomes.

Furthermore, the corporate income tax was increased from 12 percent to 13 percent, and an exemption for small corporations eliminated; the estate tax was doubled, and the exemption floor halved; and the gift tax, which had been eliminated, was restored, and graduated up to 33-percent.

Hoover also tried his best to impose on the public a manufacturers’ sales tax, but this was successfully opposed by the manufacturers. We might mention here that for Hoover the great increase in the estate tax was moral in itself, in addition to its alleged usefulness as a fiscal measure. The estate tax, he declared, is “one of the most economically and socially desirable—or even necessary of all taxes.” He hinted darkly of the “evils of inherited economic power,” of “cunning lawyers,” and “obnoxious” playboys: there was no hint that he realized that a tax on inherited wealth is a tax on the property of the able or the descendants of the able, who must maintain that ability in order to preserve their fortunes; there was not the slightest understanding that a pure tax on capital such as the estate tax was the worst possible tax from the point of view of getting rid of the depression.

By the time Hoover left office, top marginal income tax rates were at 63 percent, business regulation had ballooned and government spending had doubled.

Roosevelt just increased his predecessors interventionism and tax hikes, by raising top income tax rates to 79 percent, more regulation. Unemployment skyrocketed during these years as did government spending, which rose over 80 percent in the New Deal era.

Here is a little video from the The Center for Freedom and Prosperity that explains some of this. If you are bored by watching videos on the economics of the Great Depression, the cute girl should help keep you interested—for the guys at least:

So if government intervention helped prolong the Great Depression—which was known as simply the Depression in most of the world because corrections in the market happened much more quickly without the government trying to fix things–what ended it?

Conventional wisdom is that World War II ended things, but that’s only part of the story.

Most New Deal programs ended during the war as and Congress did away with the Works Progress Administration (WPA), the Civilian Conservation Corps (CCC) and the National Youth Administration (NYA). These were too much of a drag on the economy when the nation was trying to win a war.

Toward the end of World War II, Roosevelt and the New Dealers tried get the government to muck up the economy once more with a second New Deal and introduced a second Bill of Rights. These rights included  “adequate medical care,” a “decent home,” and a “useful and remunerative job.” Roosevelt died before the second New Deal could get much traction and Truman never had the large Democratic majority in Congress and was shut down by Republicans with the help of some southern Democrats.

Democrats haven’t changed much, it seems, since these old ideas–the true failed policies of the past–keep coming back time and time again.

President Lyndon Baines Johnson’s War on Poverty–which has cost trillions as poverty has increased since it’s implementation–was also referenced by Jackson today on Fox News.  It, of course, been another massive failure. Still worse, is the burden New Deal and similar programs put on future generation, as Social Security, Medicaid and Medicare teeter on bankruptcy with millions of Americans have grown dependent on them.

People like Jackson will learn nothing form the failures of the past, but we can do something to stop future failures by rejecting the idea that only government can save the economy and by keeping our current president from getting another term.