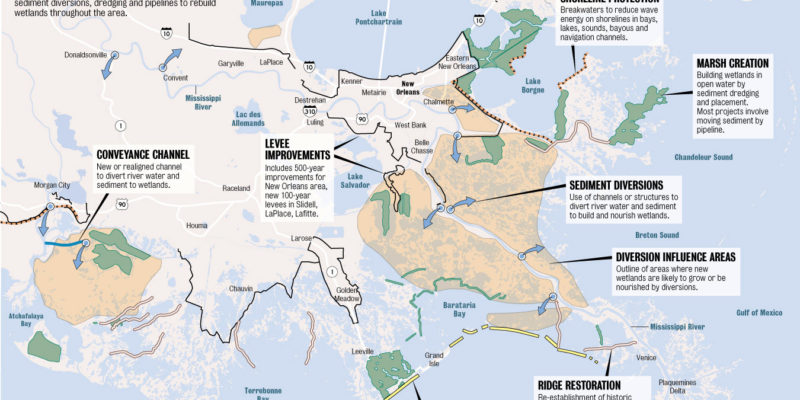 The Coastal Protection and Restoration Authority (CPRA), which was created by the Louisiana Legislature in 2006 to deal with the coastal erosion problem, has released it’s second coastal master plan—a 50-year, $50 billion project.

The CPRA is required to update the master plan every five years and the first one was created in 2007. You can read the draft for the new plan at www.coastalmasterplan.la.gov.

The new plan is currently under review, with the public being asked for comment on it up until Feb. 25. The CPRA will hold three public meetings across the state on the matter from Jan. 23 to Jan. 25. I plan to be there for at least one of the meetings to get some video. After the public is done vetting the plan, it will be sent to the Louisiana Legislature for approval during the Legislative Session this spring.

The CPRA reports that Louisiana has lost 1,883 square miles of land since the 1930s, but last year’s BP oil spill helped shine the national spotlight on our state’s coastal erosion. Here is a PBS video on the problem featuring authority Chairman Garret Graves:

The CPRA has this map showing projects slated in the plan to protect and restore the coast. These projects would be largely funded by Clean Water Act fines paid by BP, congressional appropriations for levee and restoration programs, and a share of federal offshore oil money that is projected to be about $200 million a year in 2017. You can click on the map to get a larger picture: 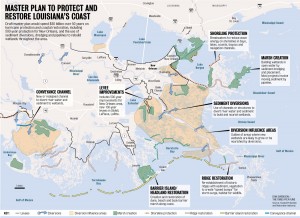 A new $72 million 100 year levee system would be constructed to protect Slidell and the existing lakefront levees would be extended to LaPlace at a cost of $469 million. Another $510 million would be used to build up levees in Plaquemines Parish to the 100-year protection standard.

The proposed Morganza to the Gulf levee around Houma would be built at the 100-year level for $4 billion. It would cost another $1.8 billion combined for 100-year levees from Larose to Golden Meadow and ones to protect communities in Vermilion and Iberia Parishes. The same amount would be spent to upgrade New Orleans levees to a 500 year standard and creating a 100-year ring levee around the Lafitte area is expected to cost $856 million.

Another ring levee would be built around Lake Charles to the 500 year-standard for $1.1 billion

About $13 billion would be used for homes and commercial properties would be elevated or be bought in high-risk areas.

The other half of the $50 billion would be used for restoration, with the biggest chunk– about $18 billion–going for marsh creation. Much of the remaining money would be used to construct barrier islands and diversions.

The CPRA also has a map depicting what they project the coast could look like 50 years out if the master plan isn’t implemented and a 100 year storm were to hit Louisiana. It isn’t a pretty picture. Like the above map, you need to click on it to get a bigger view.

This is an important issue for Louisiana and there is, or course, a whole lot of money involved. The public meetings will be: