Yesterday’s Nooner had this picture on it, coming off the piece MacAoidh wrote about that trade show in Iowa, or whatever the heck it was.

Point being that while Tuesday was a pretty good night for Rick Santorum, who is now gonna have some pretty rough nights – he didn’t get any of the scrutiny all those better-known candidates got before he started showin’ some life, and now we find out he’s all about unions and he’s a little selective in how much he liked our guy Ronald Reagan as president – it wasn’t so hot a night for the rest of us.

Which means those smiles go upside down.

MacAoidh found that picture and he thought it fit. He nailed it.

Problem is, there are weenies out there. And the Nooner mailbox turned one up this morning from one of them.

Why would you be so hateful and publish this photo of this little girl.  You should be ashamed of yourself as her young friends see this, fail to read your content, and tease her…at your instigation.  Guess that makes you a bully.

Maybe Miz Marilyn didn’t think it through or right-click on the picture to find out that somebody else has already published that picture.

Or maybe she’s unaware of where that picture came from.

Because if she did she’d know it’s been out there a while.

That picture is from 2006, when Santorum gave his concession speech after getting blowed up in a re-election bid. Blowed up, as in he got beat 59-41.

59-41 is a pretty bad beating. Nobody gets beat 59-41 and six years later they’re president. Nah happen.

Real sad, as it happens. 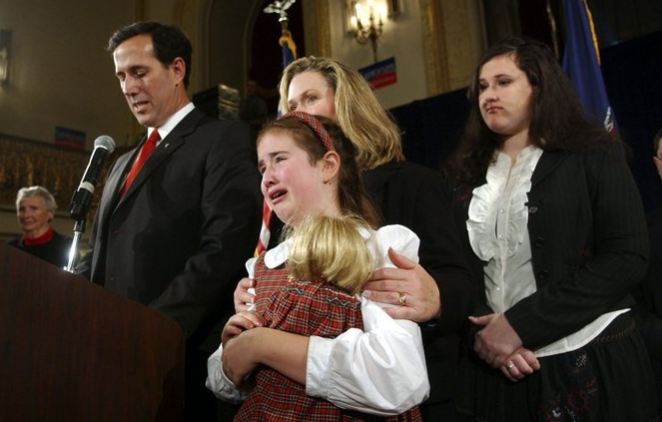 Nobody wants to see little Sarah Maria cry on stage. Thankfully she’s not so little anymore – she’s 14 now. She also had a song written about her after the whole concession-speech-crying episode was all over the TV. Martina McBride did it…

Miz Marilyn got pulled off the Nooner list, like she wanted. But the picture stands. Santorum isn’t gonna beat Obama. He isn’t even gonna beat Romney.

Sorry, but that’s just the way it is.