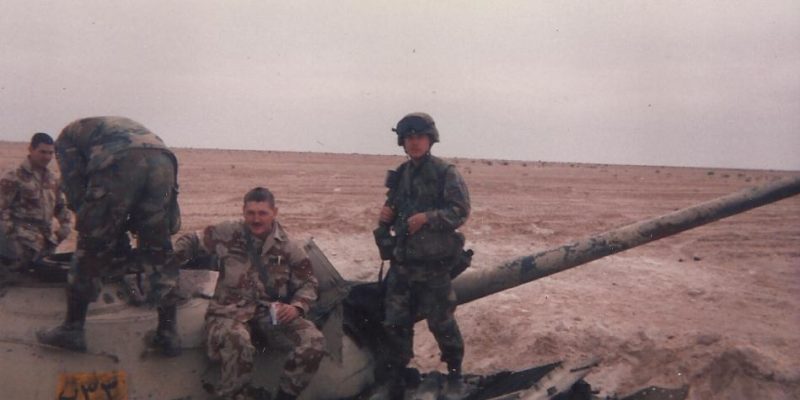 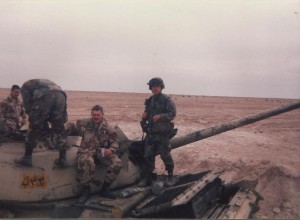 There is a bit of irony with news stories today concerning President Obama’s military health care spending cuts in his proposed budget, given that today marks the 19th anniversary of the end of Gulf War I—also known as the Operation Desert Storm.

I should know, because I was there. I was 19 years-old at the time, so it happened literally half a life-time ago for me.

This is a picture of me (far right) on top of an Iraqi tank with some more guys from the Louisiana National Guard 1087th Trans. Co., the unit I was in at the time. The until was out of Vidalia back then and is now located in Jena.

I didn’t do anything particularly heroic over there—mostly just drove an A2 cargo truck.

I returned with a lot of sand fleas and a bad case of insulin-dependent diabetes, which I believe resulted from the anthrax vaccination the military gave me before I deployed.

A physician named Bart Classen testified in front of the Committee on Government Reform of the United States House of Representatives on the link between the vaccination and my type of diabetes in 1999. I spoke with Classen years ago, who told me that I was a text-book case on the research he had done.

There are lots of people who continue to suffer from all kinds of debilitating diseases—many far worse than mine—from what’s called Gulf War Syndrome, stemming from their time over there:

It’s a given that wars aren’t very healthy and I don’t recommend them for people who don’t want to develop problems after returning home. These days, servicemen don’t have to wait to get home to be diagnosed with some kind of disease, as many are maimed by Improvised Explosive Devices (IEDs) in Iraq and Afghanistan.

All of this brings me back to Obama, whose budget would boost co-payments and deductibles by a much as 345 percent or so over the next five years for military retirees enrolled in Tricare. Tricare is the federal health care program that serves active duty, U.S. National Guard and Reserve members, retirees and their families.

This should be no problem, however, since unnamed administration official are counting on Tricare members to opt of the medical benefits they have earned and sign up for Obamacare.

To put it simply, the Obama Administration is hoping to push military retirees from the medical care benefits they were promised by making them more expensive so that those who served will eventually be covered by the same shoddy socialized medical care system they are building for the general public.

Under Obama’s plan, annual premiums for Tricare would be raised by 30 to 78 percent in the first year before going up an additional 94 to 345 percent over the next four years.

A lot has changed since 1991 and looking back makes me long for a simpler time when the only guy named Hussein was the guy we were fighting—not the middle name of our Commander-and-Chief.

So, here is a shout out to all those who served with me in the Gulf War and in remembrance of those who didn’t make it back.

I worked in a POW camp that doubled as a graves registration unit in southern Iraq for a short time during the war. One solider they brought in that lost his life was the same age and rank that I was.

Reflecting on all the roads I have traveled since those days, I can’t help but think of him today and the dusty desert roads I was driving 19 years ago:

Interested in more national news? We've got you covered! See More National News
Previous Article The Travesty In Pennsylvania Shows The Need For Anti-Sharia Legislation Around The Country
Next Article ONE LOBSTER HAG DOWN, ONE TO GO: Maine Senator Olympia Snowe Won’t Run For Re-Election