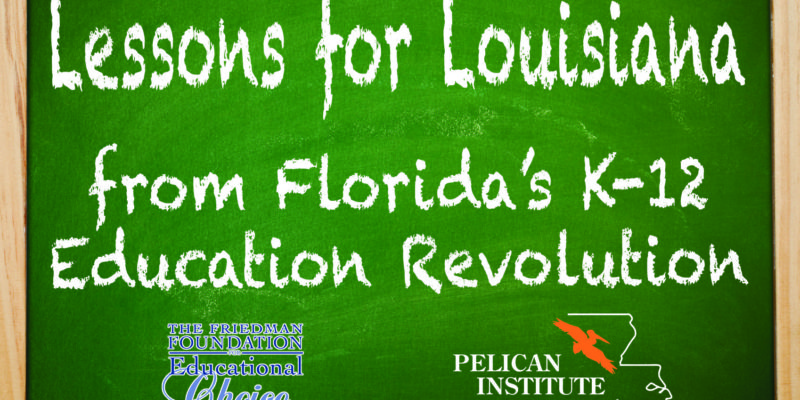 As state lawmakers arrive in Baton Rouge next week, one of the first issues they’ll discuss is Gov. Bobby Jindal’s education reform plan to expand school vouchers statewide. In considering such an expansion, two pro-reform organizations are suggesting lawmakers look to their neighbor for advice.

“Lessons for Louisiana from Florida’s K-12 Education Revolution,” co-released by the Louisiana-based Pelican Institute for Public Policy and Friedman Foundation for Educational Choice headquartered in Indiana, found that Florida, once lagging in education performance compared to Louisiana, is now leading the Pelican State academically. The report credits Florida’s myriad reforms, including its statewide school voucher programs, for its gains, which are particularly prominent among the state’s Black and low-income students.

“Florida and, in fact, 16 other states have proved that broadly-available school choice helps public schools improve and assists families in real need,” Robert Enlow, president and CEO of the Friedman Foundation, said. “Florida’s statewide scholarship programs are a leading reason why its low-income students perform better on reading tests than Louisiana’s average for all students.”

The “Lessons for Louisiana” report uses data primarily from the National Assessment of Educational Progress’s (NAEP) fourth-grade reading test, which the organizations claim is a critical measurement of student performance.

“If Louisiana students cannot read at a young age, experts agree those children have extreme difficulty learning in later school years and over the course of their lives,” Kevin Kane, president of the Pelican Institute, said. “Louisiana should learn from Florida’s efforts to improve student reading levels by increasing the availability of private school scholarships to students in underperforming public schools.”

One Florida scholarship program cited in the report is identical to Gov. Jindal’s proposal: a statewide voucher program for children in underperforming public schools. According to “Lessons for Louisiana,” analyses of Florida’s program, and other choice programs, concluded that vouchers helped the students who used them and the public schools affected by vouchers.

The Friedman and Pelican report also notes that to ensure accountability, the most successful school choice programs permit private schools to maintain their autonomy while providing a reasonable level of transparency and reporting to government and parents.

“Private schools have been educating Louisiana students successfully for centuries and we need to preserve their autonomy,” Kane added. “The strongest accountability tool is giving parents the opportunity to leave a school and find another option that works best for their child.”
“Lessons for Louisiana from Florida’s K-12 Education Revolution” is available at www.pelicaninstitute.org/2012/03/lessonsforlouisiana/.