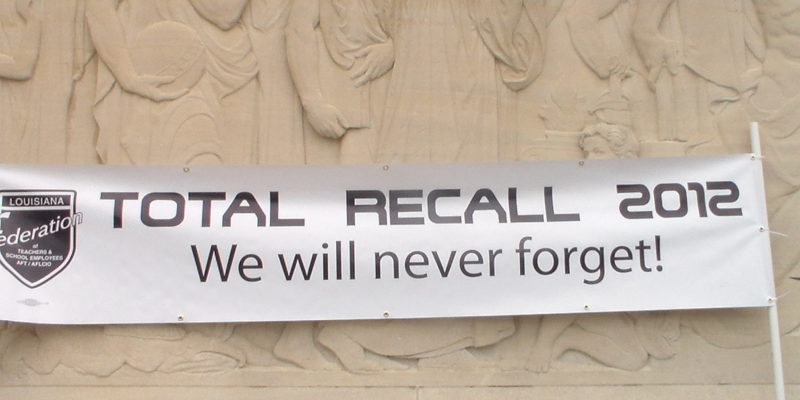 So, Louisiana’s premier teachers’ unions don’t have much to do with the recall petition of Gov. Bobby Jindal. It’s just a grass-roots effort, according to the union member behind the petition, in a story from The Washington Times:

Thus far, the state’s two largest teachers unions — the Louisiana Association of Educators (LAE) and the Louisiana Federation of Teachers (LFT) — have not formally signed on to the effort, which was started by a Calcasieu Parish instructor who has described herself as “fed up” with the governor’s proposals. “I think this is something organic filtering up from the grass roots,” LFTspokesman Les Landon said. “There is a lot of anger out there over what this governor is doing.”

All well and good, but let’s look at little deeper. The specter of a recall election for a governor that won re-election with 66 percent of the vote was first raised by Louisiana Association of Educators President Joyce Haynes back at the March 15 teachers’ union rally.

Here is the now infamous video:

To be completely fair, Haynes never directly said that Jindal should be recalled—just strongly hinted at it—and had her comments followed by chants of “recall Jindal.” Interestingly enough, The Louisianan Federation of Teachers took up the banner and had this banner out literally at Wednesday’s rally at the Capitol: 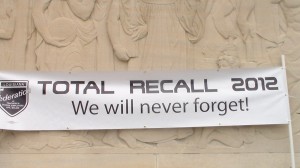 The Louisiana Federation of Teachers chose “Total Recall 2012” for their rally theme. And you had a few red-shirted union members soliciting signatures for a recall of Jindal and House Speaker Chuck Kleckley there:

And then there is this: Louisiana Federation of Teachers President Steve Monaghan said “recall” about 30 times in his roughly 10 minute speech at yesterday’s rally. I have edited the video, so you won’t have to suffer through the whole thing as I did.

I have to admit that I’m a little disappointed in the teachers unions’ leaders for continuing to refuse to directly call for a recall and instead resort to using double entendres and leaving the dirty work to their minions.

I thought they were made of sterner stuff.

Are these really the people that Louisiana politicians have been so afraid of for the last 40-plus years? Even I intimidated Haynes, who stepped away from the podium every time I turned my camera on.

She finally announced that she was going inside so “the little guy from The Hayride” wouldn’t record her anymore. Disappointing, indeed.

If teachers’ unions want to see Jindal recalled, their leaders should just come out and say it—only not 30 times. It can get a little redundant and annoying. That, I can attest to.

Interested in more news from Louisiana? We've got you covered! See More Louisiana News
Previous Article (UPDATED) Today Is Judgement Day For Education Reform
Next Article The Sheriffs’ Gravy Train Is Getting Back On Track At The Legislature