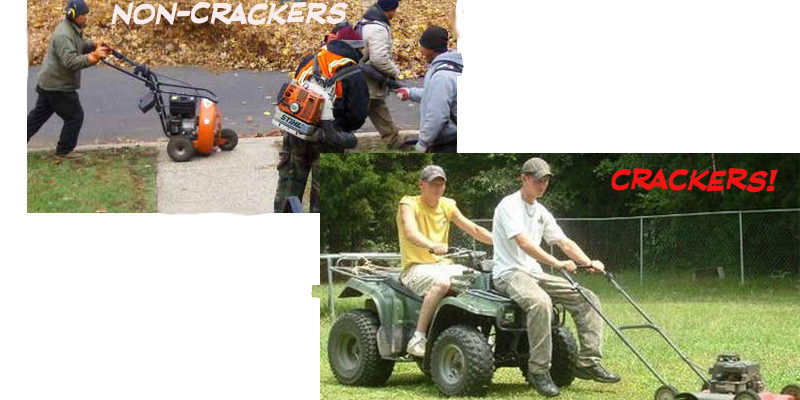 Recent stories revealing that George Zimmerman has black roots has got to be embarrassing for members of the New Black Panther Party, who have put out a bounty on the “cracker” that gunned down unarmed black teenager Trayvon Martin.

Zimmerman, it’s been discovered, has an Afro-Peruvian great-grandfather—the daddy of the material grandmother that helped rear him.

As it turns out, Zimmerman is a white Hispanic black and who really knows what else?  Whatever his lineage, I’m pretty sure that there’s probably no cracker blood in him at all, as I understand the term.

I thought I had a vague idea of what a cracker is, so I did a little research to see if I was right. It turns out that I was correct about the designation and confirmed a suspicion of mine that I’m a cracker.

The term dates back to the 19th Century, when settlers of Scots-Irish extraction settled the western territories. Populating the South, these poorer farmers growing cash crops were disparaged by richer planters in the East as  “corn crackers.”  The term was shortened to cracker after a while—meaning backwoods southerners.

I have Creole, German, and English ancestors—but also a lot of Scots-Irish blood flowing in my veins. Many white people in Louisiana have the same heritage.

There is even a little Jewish blood coursing through me, but I hope that no Black Panther reading this hold it against me—I haven’t returned calls from my Zionist masters in weeks.

Since my mother’s father was a piss-poor sharecropper from Mississippi, I feel sure that the cracker label is something that I can’t escape. I might try to argue that my Native American ancestors exempt me on grounds of political correctness, but I might as well face facts—I’m a bona fide cracker.

As a cracker, however, I’m pretty good at spotting others of my kind—which the Black Panthers apparently aren’t. I want to be helpful, so I’ve come up with a primer to assist them.

Here is a little compare and contrast Black Panther’s Guide To Identifying Crackers: 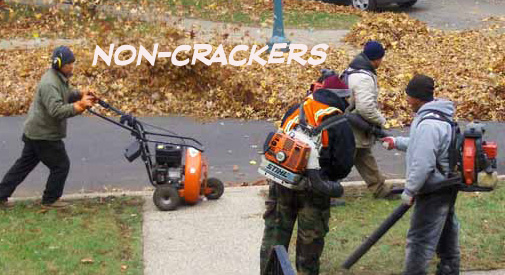 These people doing yard work are not crackers.

How to tell? Well, first of all, their skin is a little too brown—kind of the hue of Zimmerman’s. As far as I can ascertain, they are Hispanic—probably Mexican immigrants. If any Black Panthers were to run across a scene like this, they might also want to time the progress of work to make sure that they aren’t dealing with crackers.

Crackers would most likely take a lot longer to finish between beer breaks and cursing the fact that they weren’t able to hire any Mexicans to do the job.

Now these guys doing yard work are definitely crackers. The four-wheeler is a dead giveaway. It’s a common mode of transportation for the cracker set and the fact that they are using it to make their job easier is another red flag. 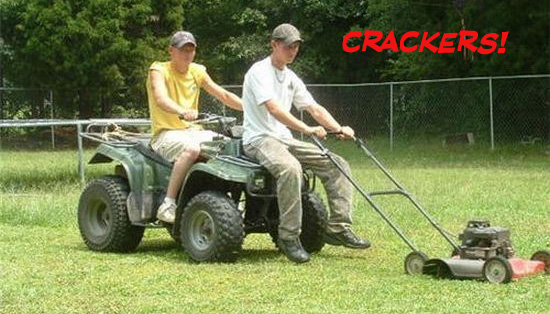 It’s not that crackers are lazy, it’s just that they are extremely innovative when it comes to finding ways to do a job.

The camouflage is also a good indicator. They are also white. That is something that Black Panthers might want to wright down to help them avoid the kind of confusion they had with Zimmerman. 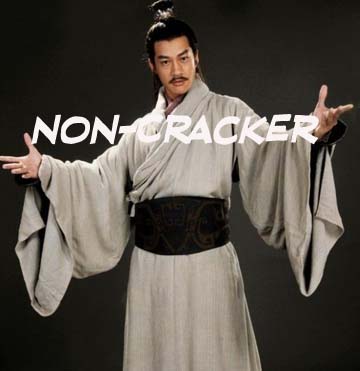 Speaking of cracker garb, here are a couple of set of pictures that might help out some.

This guy is most definitely Asian, I’m not going out  on a limb too much with this one, I think.

He has sideburns, something that crackers have been known to sport, but we will touch on cracker hair-styles later.

This guy would never follow Trayvon Martin down the street with a gun…a samurai sword, maybe.

The primary give-away that he is in no way a cracker is how he is dressed in traditional Asian clothing. Notice that there is no camouflage and a guy like this wouldn’t need to dress any particular way so you wouldn’t see him coming.

He would just blend into the shadows. Crackers aren’t very good at that sort of thing.

They only tend to blend in at NASCAR races and Toby Keith concerts. 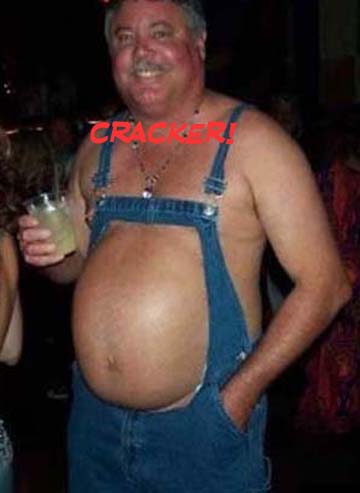 Clothing should serve as a good way to make sure that it’s a cracker that you are hating on.

If any Black Panthers ever stumbled across this guy I don’t think that any would have a problem identifying him as a person worthy of their ire.

There is no way that he is anything but a cracker. Sad to say, he is one of my own. I’m not proud, to say the least.

Only a cracker would decide that it was a good idea to cut up a  perfectly good pair of overalls because it was somewhat constraining. It isn’t out of our nature to make such unadvised decisions in fashion and other things.

We crackers love freedom and have done a lot to keep this country as free as possible. That’s something I am proud of.

Sometimes, however, it might be wise to constrain our fidelity to liberty when venturing out in public.

The gut is another indicator that we have a cracker here. Cracker males tend to gain belly weight disproportionately.

This generally is a result from consuming too many cold beers.

I’m not sure what this cracker is drinking, but it’s a safe bet that it isn’t lemonade. 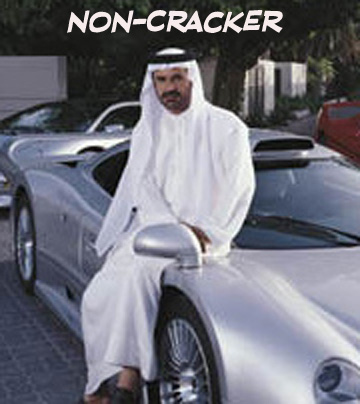 If any Black Panther was to meet up with this fellow, he should just keep his billy club in check.

This is an individual who is anything but a cracker.

Most likely, he is a rich Arab sheik, raking in money by the camel-load with fuel he is selling to Americans.

That’s why he has taken it upon himself to poise on one of his many fine automobiles.

It’s unlikely that a Black Panther would run into this guy, unless he were to meet him on a trip to the Middle East with Louis Farrakhan.

In any case, this man is most likely a Muslim who’s money is helping finance radicals in Saudi Arabia hellbent on bringing American to its knees.

This would be cool with the Black Panthers. In case their might still be any confusion, this next guy is a typical cracker that even the most dimwitted whitey-hater should be able to spot. 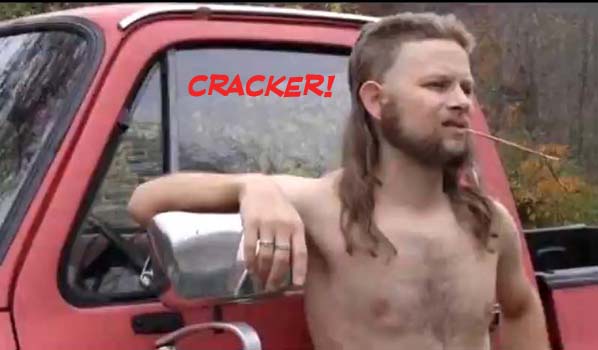 Promised I would get into cracker hair and here is good example of a hairdo that makes it certain that you have run across a cracker.

It’s called a mullet and I don’t think that few other sects could lay claim to a style as indicative of their upbringing.

The pick-up truck is a common cracker vehicle, but not one exclusive to the southerner of Scots-Iris extraction.

Spotting one driving shirtless is evidence that it’s a cracker. Even more so with females. 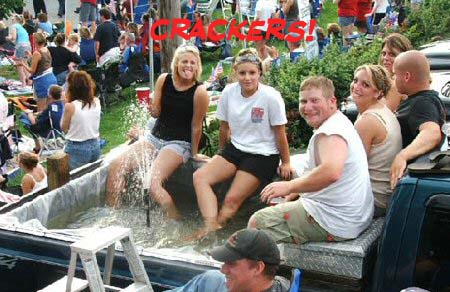 Crackers are quite fond of pick-up trucks and use them for much more than just transportation.

There have been many cracker babies that have been conceived in a flatbed.

Crackers love their trucks, which are used as much for recreational purposed as they are  for getting where they need to go.

Any Black Panthers that would discover a scene like this should just  lock-and-load.

Letting a cracker gathering like this to go unchecked could mean dire consequences for ridding the world of white devils. What would Rev. Wright think?

I hope that this was helpful to Black Panthers to keep them from getting egg on their faces by accusing any other white Hispanic blacks who shoot black kids as being crackers.

I could keep on with this primer, but I really need to drive my pick-up truck down the street for a few cold beers—damn my cracker ways.