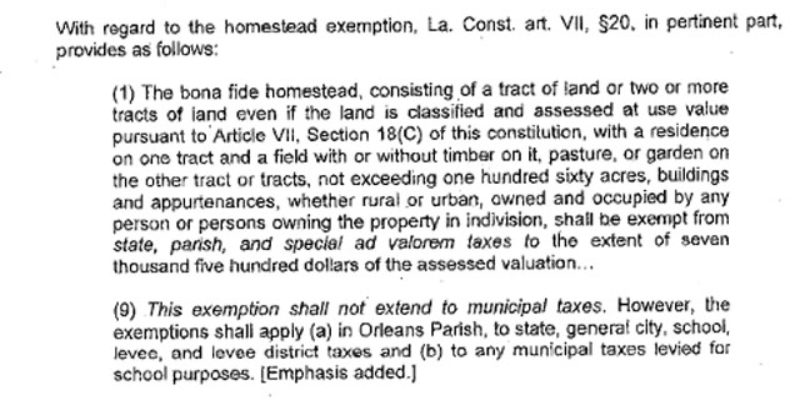 An opinion out of Louisiana Attorney General Buddy Caldwell’s office this afternoon has cast severe doubt on the constitutionality of the recently-passed $18 million annual Capital Area Transit System tax in Baton Rouge.

The tax was set up to be exempt from the state’s homestead exemption, and its defenders argued that because CATS had been set up as a political subdivision of the state it had the power to levy taxes. But CATS is not a municipality – and only municipalities are eligible to slide their taxes past the homestead exemption.

And today, after a request for an opinion on the issue by Rep. Alfred Williams (D-Baton Rouge), Caldwell weighed in…

Does this invalidate the CATS tax? No, but it does mean the fiscal projections upon which it was sold are thrown into chaos. For example, if the homestead exemption applies there is no way the tax will raise $18 million per year against the millage the voters passed (according to the Baton Rouge Business Report, they’re going to come in about $2.5 million to $3 million short). And if it won’t raise $18 million per year, CATS can’t deliver the benefits it promised – namely, more empty buses for people not to ride in.

The next step is a lawsuit, of course.

But we also have this, sent in from a reader with some legal expertise…

The best legal argument for invalidating the tax is that it establishes unconstitutionally disparate municipal taxation in violation of the equal protection clauses of the U.S. and Louisiana constitutions. This challenge would be based on a single but solid precedent that has never been overruled.

The key precedent is Louisiana & Arkansas Ry. Co. v. Goslin, 258 La. 530, 246 So. 2d 852 (1971) (hereafter “Goslin”). That case involved a two mill ad valorem tax imposed by the Red River Waterway District. Taxpayers within the seven parishes comprising the district (and therefore subject to the tax) brought an equal protection claim, arguing, in part, that their constitutional rights were violated because three neighboring parishes were not part of the taxing district, but would nonetheless receive the benefits of the tax. The trial court dismissed the petition on the grounds that the petitioners could not state a cause of action. The Supreme Court reversed, holding that:

The petition sets forth that the property in the three excluded parishes which border and front on the Red River will receive the same benefits as petitioners’ property which is located in the other parishes similarly situated with regard to the Red River. And it is alleged that the exemption of these three parishes from the District relieves the taxpayers therein from bearing their fair share of the tax burden assessed for the construction, operation and maintenance of the proposed project, notwithstanding that they, as aforesaid, receive the same benefits as the taxpayers in the other seven parishes.

If these facts are correct, and we must assume that they are in considering the exception, we agree with the plaintiffs that the exclusion of the three named parishes does constitute an arbitrary discrimination violative of the equal protection clause of the Federal Constitution, because if all of the parishes are similarly situated, as alleged, there is no reasonable basis for excluding any of them.

The plaintiffs in Goslin ultimately lost because the lower court found that the excluded, untaxed parishes in fact did not benefit from the waterway district activities. However, the Supreme Court set forth the applicable standard of review as follows:

The constitutional right to the equal protection of the laws means that everyone is entitled to stand before the law on equal terms with, to enjoy the same rights, as belong to, and to bear the same burdens as are imposed upon others in a like situation. This protection is equally applicable to the taxing power of the State or its subdivisions. The constitutional restriction, however, does not operate so as to prevent a variety of classifications, or remove from the discretion of the State Legislature its right to provide a number of differences in the selection or classification of persons or property (geographical, or otherwise) so long as the discrimination is not invidious, unreasonable, or oppressive, but founded on just and equitable distinctions. In cases such as this one, where it is asserted that certain classifications or exemptions therefrom, are discriminatory and violative of the principles of equal protection, the function of the courts is to determine whether the distinction is arbitrary or is based on practical and reasonable grounds with relation to the public purpose sought to be achieved by the legislation.

Unlike the benefits examined in Goslin, the CATS benefits that will be received by untaxed parties are substantial. If CATS routes are specifically planned and stops are intentionally located at exempt properties (the Mall of Louisiana and the proposed express line to it being the best example), the failure to similarly tax those properties cannot be rationally explained. While a municipality rationally could decide not to collect taxes from certain people, it should not specifically direct to those exempted persons services paid for by non-exempt taxpayers. Further, the untaxed CATS beneficiaries are not merely enjoying the same benefits; they are, in some cases, being treated better than CATS taxpayers. Numerous businesses within the city limits of Baton Rouge or Baker would desire a dedicated express bus route.

Goslin was decided in 1971. It has never been overruled, but research to date has identified no subsequent cases involving similar claims.

CATS can be expected to argue that the benefits and services to resident property owners of transportation to major shopping areas is the rationale for these routes, and the benefit to the shopping areas of improved transportation for potential customers is simply incidental to the benefit conferred on the resident property owners. The rationale for many cases upholding tax measures is, essentially, that the Constitution doesn’t require perfection. It may be constitutionally acceptable if some people on the periphery will benefit from a tax, even if they aren’t paying it. Before we proceed, we should look more closely at the question “who benefits and why?” and, specifically, how the state having a deliberate role in selecting beneficiaries affects the constitutional analysis.

Anyone owning property within city limits, and therefore paying the tax, would have standing to bring this disparate taxation claim.

The Industrial Areas Foundation’s Baton Rouge affiliate Together Baton Rouge won a significant victory at the polls in late April by getting CATS passed. But upon review and reflection, that victory seems hollow – because the tax proposal was sloppily constructed and has significant legal defects. It’s unlikely to survive constitutional muster. Today’s opinion is only the beginning of that process.

And the dubious promises offered forth by CATS proponents will no doubt damage their credibility in future public-policy debates.


Interested in more news from Louisiana? We've got you covered! See More Louisiana News
Previous Article Our Leaders Don’t Care About A Balanced Budget
Next Article It’s A Political Game At The Capitol