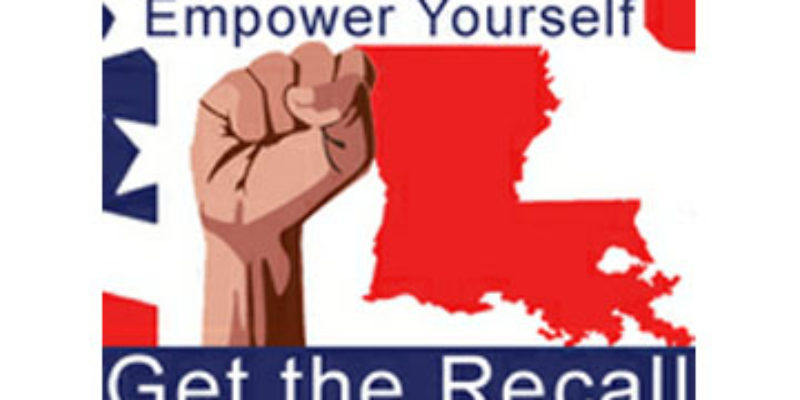 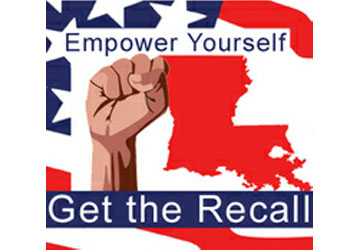 One would suspect that members of teachers’ unions – given that their day jobs involve the dissemination of information – would be aware of their surroundings. But in watching the slow-motion fizzle of the recall efforts against Gov. Bobby Jindal and several of his allies in the state legislature it would appear that some of them don’t pay much attention.

The teacher-union crowd responded to the passage of Jindal’s education package by immediately launching a recall effort against the governor and House Speaker Chuck Kleckley, and since then Reps. Greg Cromer and Kevin Pearson have been targeted. Just Monday a fourth legislator, Rep. Ray Garofalo, was put in the recall crosshairs.

To trigger a recall election the petition circulators have to generate signatures from one-third of the registered voters of the district (or the state) the prospective recall victim represents. It’s never been done, and it won’t be done here. For the four state representatives they’re trying to take down, that would mean they’ll need 9,000 signatures. For Jindal, they’ll need something like 945,000.

Louisiana doesn’t have that many teachers, and what’s more the teacher unions don’t command the allegiance of everybody in their profession.

And just because they’d get a recall petition with enough signatures on it that won’t get rid of their target. They’d need to actually run somebody against him and win.

We’ve seen how well that works. Louisiana’s Democrat Party hasn’t been able to generate a candidate with a hope in hell of winning against Jindal since 2003. This is the same Louisiana Democrat Party which can’t even generate a candidate for Congress outside of Cedric Richmond. They can’t find one to run against John Fleming, they can’t find one to run against Rodney Alexander, against Bill Cassidy, against Steve Scalise or against Charles Boustany and Jeff Landry in what could be a three-way race.

Given how incredibly weak the state’s Democrats are, you’d think they would marshal their resources for the election cycle in three years (if they can’t actually participate in the regular electoral process this year). You’d think the word would come down from the Louisiana Democrat Party to the teachers’ unions that building for 2015 is what’s important.

And you’d especially think that crowd would take some lessons from Wisconsin.

Wisconsin, after all, is the birthplace of public employee unions. In Wisconsin those unions are at their strongest. And in Wisconsin it’s easier to get a recall going than it is in Louisiana.

They tried recalls in Wisconsin, and got precisely nowhere. After some $60 million in union money spent trying to recall Gov. Scott Walker and the better part of a dozen state senators, the Democrats managed to get a one-vote majority in a Senate that won’t meet again until after the next election cycle where redistricting will wipe that majority out.

In other words, they wasted all that money – and that was in a state which is traditionally Democrat and union-friendly.

Louisiana? No such advantages.

What’s more, the organizers of this debacle aren’t even following the law. The state GOP, which is treating the recall efforts as a chew-toy of sorts, filed a public records request in an effort to identify the head recallers. They managed only partial success – two of the recall chairmen showed their cards by officially stepping down. From the GOP’s release on the subject…

Louisiana law states that “upon the signature of the first elector, the recall petition, including the name, address, and signature of each elector who has signed thereon, shall be a public record. The chairman, or the vice chairman when acting as the chairman, shall be the custodian thereof. The petition and the custodian shall be subject to all of the provisions of R.S. 44:31 et seq. (LA R.S. 18:1300.5B).”

The specific provision of the Louisiana Public Records Law in Revised Statute 44:31 states that “providing access to public records is a responsibility and duty of the appointive or elective office of a custodian and his employees.”

“I would like to thank Ms. Campo and Mr. Newcomb for deciding to step down,” said Chairman Villere. “They have made the right choice in refusing to associate themselves with such a shadowy and secretive organization. As for the recall committees, we still expect our public records requests to be fulfilled in accordance with Louisiana law by the new custodians.”

Today the Republican Party of Louisiana has issued formal public records requests with the new chairmen of the Recall Cromer and Recall Pearson committees. The chairmen have 72 hours to respond to the request pursuant to LA R.S. 44:32.

The leadership of the Recall Jindal and Recall Kleckley committees have yet to produce the proper campaign finance reports, in adherence to Louisiana ethics law.

The Jindal and Kleckley recalls come out of Lake Charles, though no official chairmen have been designated. Think of it as having the right to face your accuser, and the folks organizing the recalls of the governor and Speaker are denying them that right – at least with respect to reports with the state. There’s a web site for the Jindal recall, and on the contact page of that site there are lots of names. The site says the “First Officer” is Angie Bonvillain, who’s a teacher. The “Second Officer” is Brenda Romero, who’s a teacher. Listed as the South Louisiana regional coordinator is Alicia Breaux, and as the media/communications director is Lee Barrios; both are teachers. Breaux is also a union organizer and a member of the St. Tammany Parish Democrat Executive Committee, while Barrios ran unsuccessfully for BESE last year with the support of the teachers’ unions.

And on and on. If you do a Google search of everybody on that list you’ll be hard-pressed to find anybody who isn’t a teacher.

At least Garofalo’s recall chiefs have shown their faces. Peggy Schwarz of Braithwaite, and Brenda Boleware of Violet are – you guessed it – teachers. Schwartz is listed as a “Parish Contact” for Plaquemines and St. Bernard on the “Recall Bobby Jindal” website. But the site will inform the reader that it’s a “broad-based” effort…

The Recall Bobby Jindal campaign is the outgrowth of concerns and frustration by a broad spectrum of citizenry which is not being heard by the Governor and many of our legislators. Educators rightfully are leading the charge, but support from diverse groups have bolstered the effort.

They’ve offered no evidence of that support; the only endorsement which shows up comes from the Louisiana Association of Educators. Maybe they couldn’t fit it in among all the conspiracy theories about the American Legislative Exchange Council – no less than eight references to ALEC appear on that site’s front page.

The site also has a mission statement listed, which is at the same time incoherent and revealing.

It is our belief that we are now perilously close to moving into a non-democratic state within Louisiana. Thus, our mission is to remove from office those elected officials who have performed their duties with the intention of prohibiting citizen participation in the legislative process.

And rather than accept the fact we’re going to embark on a different direction with education they’re engaging in a fruitless effort at recalling a handful of politicians. An effort, mind you, which doesn’t appear to have any support whatsoever outside of the teachers’ unions.

In Wisconsin, it looked like there was a chance of success. In Louisiana, there is none.

But if the Wisconsin wannabes have a need to make themselves feel better by circulating petitions in an attempt to overturn the results of an election they barely participated in, more power to them. After all, they’re not going to be able to carry Louisiana for the president’s re-election and the state’s Democrat Party can’t supply them with congressional candidates to work for; they’ve got nothing better to do.

But the organizers of this wasted effort should know that spectacular failures in recall elections don’t build popular momentum. They’re unhelpful to the cause. That was clear in Wisconsin, which is now being discussed as a swing state for this fall’s elections after having been reliably Democratic since 1984.

These ideas aren’t hard to discover for those who pay attention. Some of the state’s teachers apparently don’t do much of that.

Interested in more news from Louisiana? We've got you covered! See More Louisiana News
Previous Article Louisiana Continues To Lead In Fight Against Sharia
Next Article KENNEDY: Louisiana Is A Consultants’ Paradise