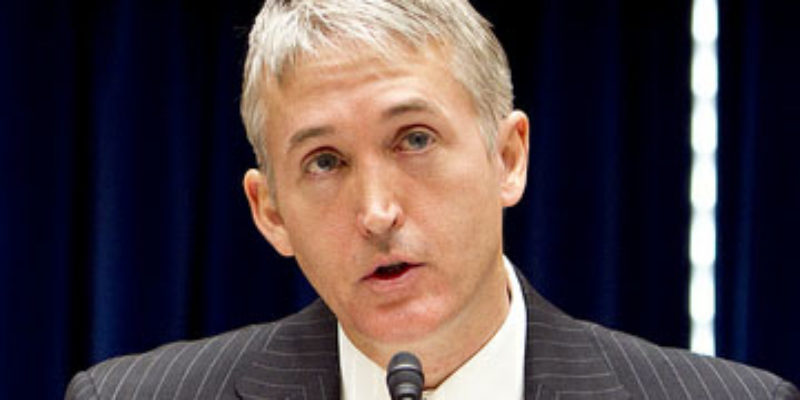 This was one of the better speeches you’ll ever see in a congressional committee, and it’s from a freshman. The speaker here is Rep. Trey Gowdy (R-SC), a former assistant U.S. attorney and Circuit Solicitor (South Carolina’s version of a district attorney) who took office on Capitol Hill amid the Tea Party revolution in 2010. Gowdy understands something about the Justice Department and he understands something about criminality.

And he’s not interested in the bovine scatology being strewn all over the floor by Democrats on the committee that the whole Fast and Furious investigation is nothing but a witch-hunt. There is clearly much more here, and Gowdy lays it out…

The answer to the “Bush started it” accusations deserves a bit more than Gowdy gave it, though he’s exactly right in saying let’s have all the facts from everybody.

The Bush administration operation that preceded Fast And Furious was something called Operation Wide Receiver. And it was a gunwalking operation, but not one like Fast and Furious. Wide Receiver essentially entailed an attempt by ATF to go after straw purchasers of guns. As in, set up surveillance on them, record the sale, and then move in and arrest them. It involved a relatively small number of guns and gun purchasers. But some of the guns involved in Wide Receiver managed to walk out of the sting, and Wide Receiver was shut down almost immediately.

So to say this was all Bush’s fault, as the Democrats are doing, is an offensive lie. It was an offensive lie when Holder told it last week, and because it’s a provable lie he’s had to retract sworn testimony to the effect that this is Bush’s mess before somebody decided to prosecute him for perjury for making the idiotic mistake of repeating partisan talking points under oath.

Just like it’s an offensive lie for the Democrats to claim that race – race! – is behind this investigation. Yes, Chris Matthews actually went there.

Between Matthews and Gowdy, we’ll take Gowdy. And after a year and a half of stalling and obfuscating an investigation into who’s responsible for the death of a U.S. Border Patrol agent, we’ll also be happy to see Holder held accountable on Fast and Furious.

And if this goes above Holder’s head, which it’s obvious it does based on the claim of executive privilege the White House intervened with today in order to keep Congress from getting a look at the key documents in this case, then so much the better.

Interested in more national news? We've got you covered! See More National News
Previous Article Do You Believe Him?
Next Article Yes, Boehner Says There Will Be A Contempt Vote In The House Next Week