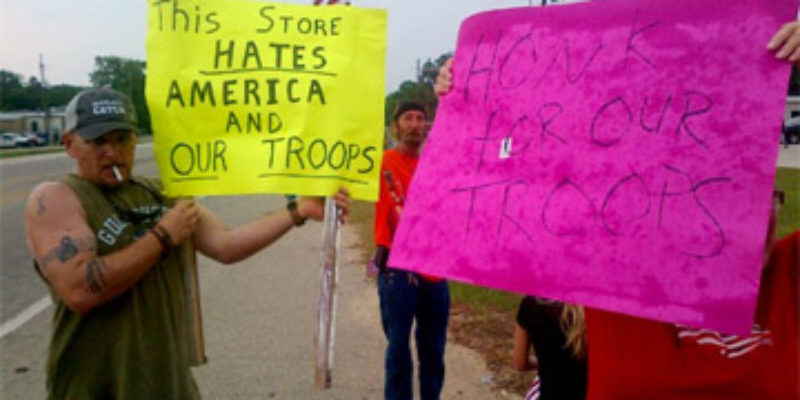 This weekend a YouTube video emanating out of Washington Parish was all the rage on Facebook. We’ll start with the video, and it’ll probably get your blood up…

If you don’t have time to watch the whole thing, essentially, the accusation is that a soldier in a military uniform went into the Bogalusa convenience store on the video Thursday to buy something and was told by the Middle Eastern clerk that “we don’t serve your kind” in that store. The incident quickly spiraled into a protest, and by Friday the store had closed its doors.

Of course, upon a little investigation it looks like there’s a little more – or less, as the case may be – to this story than meets the eye.

The Bogalusa Daily News did a little journalism on the story and came up with a few indications that the whole thing was the product of a misunderstanding and some hair-trigger goofery.

On Friday, the day after a posting on Facebook prompted dozens of flag-waving protestors to assemble in front of a store that allegedly refused service to a uniformed member of the National Guard, a Louisiana National Guard spokesman said he had heard nothing, from his people, of such a slight.

The post said that a man, who was standing in line behind a National Guardsman at SP Truck Stop on Louisiana Highway 10 just east of Bogalusa, heard the person behind the counter tell the man, “we don’t serve your kind here.”

The store’s owner, Savi, who is of East Indian descent, later denied ever turning anyone away unless it was because they didn’t have proper identification to make a controlled purchase.

On the video the store’s owners are referred to as “ragheads,” but Indians are mostly Hindu, not Muslim. So that’d be a mistake of some significance.

That nobody at the National Guard post knew anything about the incident would also indicate it isn’t the real thing.

There’s more on that…

“I have no idea of the National Guardsman in question. It was certainly none of my folks at the Bogalusa Armory, to my knowledge, not any of our full-timers and I suspect none of our part-timers.”

Cazmierzak said he used to be a National Guard commander in Bogalusa, and that as far as he knows the Guard “never had any problems with a Bogalusa business at all.”

He expressed mixed feelings about the protest and its potential impact on the business.

“It’s great that there’s patriotic support of the military out there,” Cazmierzak said. “It would be terrible if (the refusal of service) did happen. But it would be even worse if it didn’t.”

The National Guard center in Poplarville, Miss. was reportedly unaware of the alleged incident, and has only three Guardsmen from Bogalusa. But the contact said he would ask those men if they had any such experience at the store and would report back if any answered in the affirmative.

So there were 60 people out protesting the mistreatment of a soldier by the store, and no soldier. Outstanding, right?

Savi said she has never refused to serve anyone unless they did not have proper identification for a controlled item.

She said she believes that the person who thought he heard the refusal of service must have heard wrong. For example, maybe the military man asked for a brand of cigarette and was told, “We don’t sell that kind here,” and was upset that he would have to make another stop.

“Sometimes military people come over here and I talk to them too much,” Savi said.

All-American Kirk Triplett, who walked in to make a purchase, said he was a “regular” and verified what Savi said.

So if you see this story thrown around on Facebook or somewhere else, just know that it’s more a case of Ready, Fire, Aim than the one family of foreigners in town making a conscious decision to trash their own business goodwill.

Interested in more news from Louisiana? We've got you covered! See More Louisiana News
Previous Article Jindal At CPAC: Obama Is The Most Liberal, Most Incompetent POTUS Since Carter
Next Article Rolling Stone’s List Of Songs That Define Louisiana