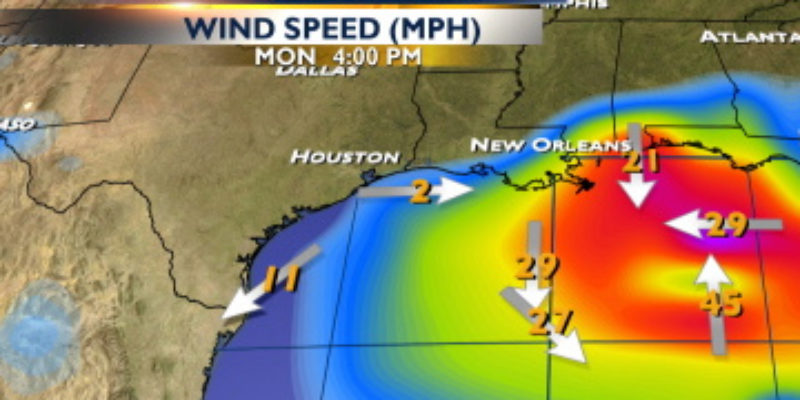 The later in the game it gets, the more west it looks like this thing is going to go.

NOAA’s latest track still says right up the mouth of the river, and that it’s currently 70 mph. Four more miles an hour and it’s a hurricane.

There are still tracks saying landfall at Gulfport, but the majority are now calling for landfall either at Cocodrie or west of that – with one track saying Cameron is going to get it.

It also appears the storm is slowing down – it was moving at 22 mph, and now it’s moving at 14 mph. That makes it easier to project the growth from its current status as a 65 mph-wind tropical storm to a Cat 1 – or even Cat 2 – hurricane by the time it hits land in the middle of the night tomorrow night.

Meanwhile, a roundup of storm preparations…

– A quarter of the oil rigs in the Gulf have already been shut in, with that number expected to greatly increase in the next 24 hours. Actually, make that number 58 percent as of about noon today…

While the storm does not yet pose the same threat as Hurricane Katrina did in 2005, it will have an impact on Gulf oil and gas infrastructure, said Satish Nagarajaiah, professor of civil engineering and mechanical engineering at Rice University in Houston, told Rigzone in an interview Monday.

Drilling rigs and production platforms both inside and outside the storm’s direct path will be impacted, as 12 to 15 foot-waves generated by the storm surge will likely be seen in the eastern and western Gulf of Mexico.

However, the upgrades to design standards for Gulf production platforms made in response to Hurricanes Katrina, Rita and Ike mean that platforms are better prepared to face a large hurricane, Nagarajaiah said.

Operators implemented other lessons from Katrina and Rita into their offshore evacuation processes and shut-in procedures as well. The Deepwater Horizon incident in April 2010 has also impacted operations, with significant improvements in equipment to allow for quick responses to equipment failure, Nagarajaiah said.

– Plus they shut in the Louisiana Offshore Oil Port today, so no more pipeline deliveries until further notice out of the Gulf.

– Low-lying areas in Terrebonne Parish are now under a mandatory evacuation order.

– Potentially $30 billion in home damage in the New Orleans area, says CoreLogic (we’d say that number is insanely high, but 1/30th of it would be more than enough to hit your homeowner’s policy. Nevertheless, Mitch Landrieu says everything is going to be OK.

– In Baton Rouge, mayor Kip Holden held a press conference to announce that he’ll be out this afternoon writing parking tickets.

Sorry, did we say parking tickets? Not really. He said it might flood along the Amite River. Also in Baton Rouge, no school of any kind until Thursday. But the LSU game is still on for Saturday night at 6:00, though they’re “monitoring” things.

– Furthermore, the National Hurricane Center just put out their latest advisory. Pressure’s dropping a little faster than it was projected earlier; it’s at 981 millibars now.

– And while they’re not doing a mandatory evacuation of New Orleans, they did move 1,000 prisoners out of Central Lockup. Call that a lesson learned from Katrina.

– The Port of New Orleans has closed. And every state building in New Orleans and Baton Rouge, pretty much.

– Amtrak has canceled train service in Louisiana until Thursday.

– State of Emergency in Lafourche Parish.

– And they’re going to keep the Causeway open as long as they can as the hurricane comes closer.

Interested in more national news? We've got you covered! See More National News
Previous Article Looks Like Isaac Might Have Screwed Up The Plans Of The RNC Protestors
Next Article Feds Say Too Few Americans Are Turning To Government For Help In Tough Times