On August 24th, we warned on Forbes that Tropical Storm Isaac could pose a threat to energy markets and even rival Hurricane Katrina in its destructive power (Could Tropical Storm Isaac Turn Into Another Katrina?).  While the computer models are still showing a substantial spread in solutions, it appears more likely that Isaac will make landfall somewhere near the Louisiana, Mississippi Gulf Coast.  This track will provide the storm more time to intensify over the very warm water of the Gulf of Mexico. 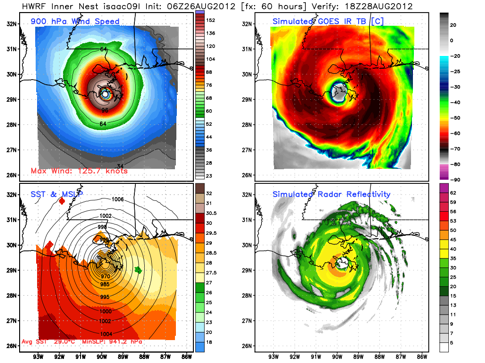 The entire Gulf Coast from Lake Charles, LA to Panama City, FL should be aware of the latest forecast model guidance.  The reason for this large spread is because the computer models are split between whether a trough will capture Isaac or not.  As of 8AM Sunday morning, it appears Isaac will not be captured and as a result, a more westward track is most likely. 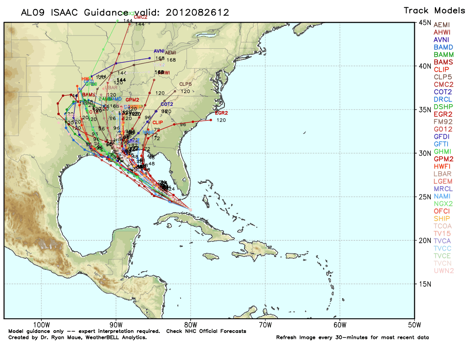 Hurricane Katrina made landfall near New Orleans on Aug 29, 2005.  It is estimated that the total economic impact in Louisiana and Mississippi exceeded $110 billion, earning the title of the most expensive hurricane ever in US history.

As Katrina moved through the heart of the Gulf of Mexico offshore oil and natural gas production area, it negatively impacted nearly 20% of US oil production. Hurricane Katrina, followed by Hurricane Rita in September, destroyed 113 offshore oil and gas platforms and damaged 457 oil and gas pipelines. Oil, gasoline, and natural gas futures prices on the NYMEX soared as damage assessments were reported.

The hurricane damage inflicted by Katrina caused oil prices to increase from the mid-$60s per barrel to over $70/bbl and gasoline prices at the pump rocketed to near $5 a gallon in some areas of the US. The US government released oil from its stockpile in the Strategic Petroleum Reserves (SPR) to offset price rises. In the natural gas market, prices were trading in the $9 to $10/MMBtu range at the time, but spiked to over $15/MMBtu as the full extent of the damage became apparent.

Additionally, the Louisiana Offshore Oil Port (LOOP) was closed on August 27, 2005, reducing production by over 400,000 barrels per day.  LOOP handles 13% of the nation’s foreign oil, about 1.2 million barrels a day, and connects by pipeline to 50% of the U.S. refining capability. The port was undamaged by the storm and resumed operation within hours of electricity coming back online.

Seven years later as what will be Hurricane Isaac bears down on the Gulf Coast, the Gulf of Mexico currently accounts for about 23% of oil production and 7% of natural gas output according to the US Department of Energy. Furthermore, roughly 30% of natural gas processing plant capacity and 44% of US refining capacity is located along the US Gulf Coast.

According to the Bureau of Ocean Energy Management (BOEMRE), 8.6% of the Gulf’s daily oil output and 1.6% of daily natural gas production was shut down as a result of Isaac approaching the Gulf of Mexico. Closing prices as of Friday, Aug 24, 2012 of NYMEX October WTI futures settled at $96.15/bbl, while September natural gas settled at $2.70/MMBtu.

When it comes to offshore oil and gas rig infrastructure in 2012 versus 2005, the biggest difference is that the rigs placed into the Gulf of Mexico in the last several years have been hardened to resist Category 4 or 5 hurricanes. However, up until now, other than Hurricane’s Gustav and Ike in 2008, there has been no real test of the endurance of newer ‘hurricane resistant’ infrastructure that has replaced much of the aging platforms in 2005.  Isaac may very well be the storm to test the fortitude of the newer offshore hardware.

In terms of energy prices, it’s very likely that the oil and gas markets will react bullishly to Isaac when traders come back to work on Monday, particularly if the computer models verify a track toward some of the more heavily concentrated oil and gas rig areas off the coast of Louisiana.

With respect to insurance companies, natural disasters have been absent for the most part of 2012.  Isaac has the potential to be a destructive and devastating storm along the Gulf Coast.  The National Hurricane Center is currently forecasting Isaac to make landfall with peak winds of 105 MPH.  There is a strong possibility that the storm will be considerably stronger at landfall.  The breakdown of 2011 personal and commercial lines market share by company can be seen in the chart below. 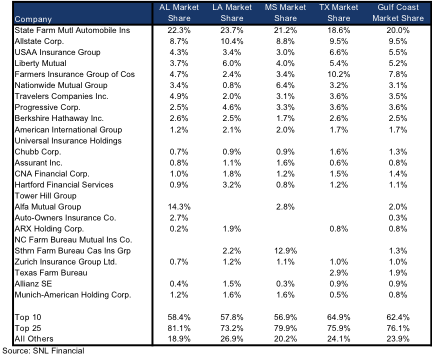 Companies with significant exposure along with the Northern Gulf Coast stand to suffer heavy losses.

Michael Barak and Joseph Bastardi, colleagues of Alan’s at WeatherBell Analytics, also contributed to this report, which originally appeared in Forbes.