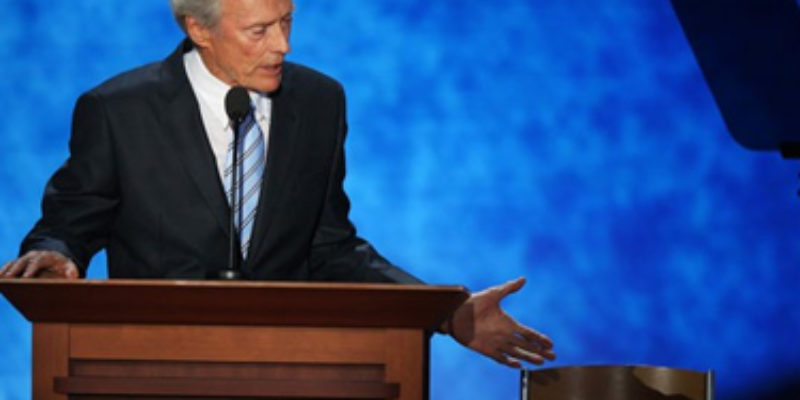 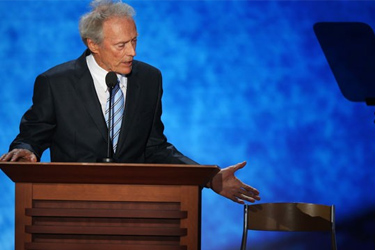 It’s not really necessary to post too much analysis of Sen. Marco Rubio’s speech introducing Mitt Romney as the Republican presidential nominee last night. Rubio’s speech was largely biographical, and in that sense it was much the same speech he’s given several times before. Rubio told the story of his Cuban parents and the sacrifices they made so that he could go as far as he did in America, and emphasized the importance of us not losing the magic which would induce that sacrifice.

A money quote: Obama is trying “ideas people come to America to get away from.”

It was a great speech, and we’ve got video of it below.

More interesting for our purposes was the “surprise” appearance by Hollywood legend Clint Eastwood, which is the talk of the convention outside of Romney’s speech.

We’re of a mixed opinion on this.

On one hand, for so accomplished a performer and someone who’s still making movies (he’s got another one coming out just now), it was a bit raw. He seemed to stammer and stumble a little, and it was off-putting at times. There was an element of the train coming off the tracks; the fact that Eastwood is 82 and he seemed a little shaky gave it an “oh, no, this is a disaster” feel.

But on the other hand, the imagery of an empty chair where our president should be was fantastic. It was disrespectful of the man, but not in a mean way and not disrespectful of the office. And Eastwood’s suggestion that Obama’s empty chair was telling him to go F himself, while a little off-color, was a terrific way to dilute what was very clearly a concerted effort at blunting the Democrats’ War On Women rhetoric throughout the convention. That base had been covered all week; a little locker-room stuff by someone who’s not a politician and has nothing to lose was terrific.

And Eastwood’s humble delivery actually made for a more effective shot when he said if someone doesn’t do the job you gotta let ’em go. That was a killer line, and it hit perfectly on a big part of the convention’s message – namely, that swing voters who don’t want to admit it was a mistake to vote for Obama can reject the job he’s doing without him personally.

That message actually comes across better when delivered in a lower key than by an Oscar-winning actor. Eastwood came across as an average guy when he let it off, and it’s going to resonate.

But what makes Eastwood’s appearance a winner isn’t even what he said. It’s the conniption it engendered from the cultural and media Left.

A few years ago, at the annual National Board of Review film awards held at Tavern on the Green in New York, I was there to hand out one of the honors. When it came time for Eastwood to accept his, he went up to the microphone and growled to me in front of the audience, “If you ever show up at my house with that camera, I’ll shoot you on sight.” The audience laughed, I laughed, but the person who issued the threat wasn’t laughing. That creeped me out a bit.  I made sure never to go stand on Clint Eastwood’s lawn.

But as I said, the best outcome from the incident last night was that it showed just how out of touch Republicans are these days. It’s as if they want a divorce from us, the American mainstream, so they can go live in the land of legitimate rapes and ice caps that don’t melt. Most Americans don’t live there on Planet Koo-koo, and I don’t suspect many will be visiting there any time soon.

Thanks, Clint: you made our day!

Breitbart’s John Nolte was ecstatic about the reaction…

The media, naturally, is furious. They don’t like to see Their Precious One mocked and they also understand the power of mockery — which is why they keep Stewart and Colbert on such a tight leash. This is why the media has already written 25 stories (5 from Politico) mocking Eastwood.

Had Eastwood said the things the media likes to hear with the same nervousness and hesitation, they would’ve called him wizened and seasoned. But because he mocked Their Precious One, suddenly he’s some kind of embarrassment.

And now Politico, Ben Smith and CNN are all talking about how they intend to use Eastwood as way to overwhelm Mitt Romney’s speech in the coming days.

All I can say in response is: Go to hell you Obama-shilling crybabies. Eastwood showed more grit and honestly in those few minutes than you water carriers have during your entire propaganda-for-the-collective careers.

What Eastwood did tonight was funnier, fresher, edgier,  and braver than anything those comedy cowards Chris Rock, Jon Stewart or Stephen Colbert have done in 15 years.

82 years-old, and Dirty Harry is still pissing all the right people off.

Otherwise, it was a more conventional program. Rubio’s speech was magnificent, though that’s typical of Rubio. He’s the best in the business.

There were other speeches as well, plus a Romney video we’ll have in the other post about last night’s festivities. For example, Jeb Bush…

…and Newt and Callista Gingrich…