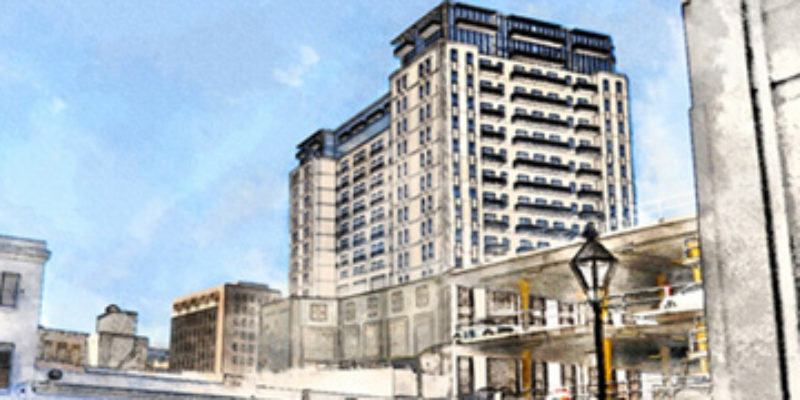 Probably because of what it takes to get through the bureaucrats and politicians there to do anything to improve the joint.

Does this sound like a place where they’re friendly to economic activity? From the Times-Picayune…

One year ago, after much controversy and debate, a divided New Orleans City Council gave provisional approval to plans for a high-rise residential building at 1031 Canal St., approving zoning waivers but also imposing some conditions on developer Praveen Kailas. After months of discussions, Kailas has secured city approval for the design of the 190-foot tower, and he hopes to begin construction on the $70 million project next year, he said last week.

Kailas’ initial plans were for a building with 307 apartments, 486 parking spaces and 38,000 square feet of retail space, with a restaurant possibly in the mix.

Those plans didn’t survive the careful ministrations of the expert real estate developers on the City Council. From the article…

On the recommendation of Councilwoman Kristin Gisleson Palmer, the council voted to require that the retail space be increased to at least 65,000 square feet, or 80,000 square feet if a restaurant is included. Palmer said the extra space would increase the chance that the developers could attract an upscale retailer.

Palmer’s background is as a professional dilettante. She renovates historic houses on weekends. Other than that, she does non-profit work when she’s not going to confabs for “pro-growth progressive leaders.” A “pro-growth progressive” is somebody who’ll tell you that they’re ecstatic to see you’re interested in improving property you own right before they’ll dictate to you exactly how you can improve it. Palmer ended up being Kailas’ huckleberry at the City Council, but if she was the one carrying water for the project she certainly spilled a good bit from the bucket over the nearly two years of hassles in getting this thing approved.

Councilwomen Stacy Head and Cynthia Hedge-Morrell voted against the project. Head said allowing a 190-foot building would be “a mistake with far-reaching consequences,” and Hedge-Morrell said the project threatened “the integrity of the French Quarter.”

Canal and Rampart isn’t in the French Quarter, and it’s tough to figure how a building that isn’t in the Quarter could threaten its integrity. After all, if the nearby Iberville Housing Projects and the criminal element it spews forth into the Quarter hasn’t threatened its integrity, one wonders how a building which could be the home for 500-750 upscale residents with disposable income to spend in the Quarter could be a threat.

Because it’s too high?

Let’s ask a question. What do you see in this picture?

See those buildings in the background? They’re all taller than 190 feet. Do they threaten the integrity of the French Quarter?

Not really, right? The French Quarter’s “tout ensemble” is only threatened if one more building goes up nearby. So said the City Planning Commission, which voted 5-4 against the project back in December 2010.

Well, here’s what Kailas’ project would look like from the Quarter… And this from Rampart and Canal… And when the plans called for a 209′ building instead of 190′, this was the effect it would have had on Canal Street… In spite of that, for the last year the developer has gone through hell from every obstructionist crank the city council could find to coddle…

During debate on the project last year, some experts said they saw little chance of attracting a high-end retail tenant unless the building owners offered such favorable terms that they would lose money on the deal.

Debate on the project last year centered mainly on the building’s planned height, which far exceeded what was then allowed by the zoning law, though there also was criticism of the proposed design.

Although the zoning set a 70-foot height limit for the site, a draft of the city’s proposed new comprehensive zoning ordinance would raise that to 120 feet. The City Planning Commission staff therefore recommended approving a 120-foot building, but the commission voted 5-3 to approve 190 feet.

Many French Quarter and preservationist leaders also called for limiting the building to 120 feet, saying that as proposed it would be too high and too massive for a site just outside the historic French Quarter. Other critics said their main objection was to the design, which they said was unattractive and out of keeping with neighbors such as the Saenger Theatre.

The Saenger is certainly an attractive building. It’s also been empty since Hurricane Katrina and won’t be finished with a public-private restoration project until next June. So what we’re seeing is a complaint that somebody who wants to spend his own money with a $200 million injection of capital into the Central Business District economy would dirty up the aesthetics of a neighborhood of abandoned and run-down buildings.

Of course, this being New Orleans it’s difficult to take all this at face value. Suspicions that most of these objections aren’t rooted in principle so much as in a desire to wet one’s beak at the expense of rich guys with money to spend are well-founded. Particularly when the rich money guys in this case donate money to Bobby Jindal, John Kennedy, Steve Scalise, David Vitter and John Labruzzo (and Mary Landrieu and Ravi Sangisetty as well, to be fair) but not to anyone on the New Orleans City Council and end up with well more than a year’s worth of political crap for their trouble before final approval.

And when the final approval says that the face of the building on the Iberville Street side can only be 70 feet and the Canal Street face can only be 147 feet, you can tell there’s horse-trading going on. What possible purpose could those idiotic rules serve?

By the way – what does the property look like now? Well, this is what the opponents of the project and those who would impede its development with micromanagement are trying to preserve…

That stinking turd, which nobody in their right mind would occupy in this day and age, is acceptable but this is not?

The politicians of New Orleans need to thank Kailas for his investment and apologize for inconveniencing, encumbering and delaying his project for so long. Otherwise, he ought to take his investment dollars and put them to work somewhere else, because obstructionist idiocy which protects abandoned eyesores deserves to be punished by the market.

Interested in more national news? We've got you covered! See More National News
Previous Article Louisiana Federation Of Teachers Wants A Special Session, Too – They Think They Can Roll Back The Education Reform Package
Next Article More Budget Cuts At Chabert Charity Hospital