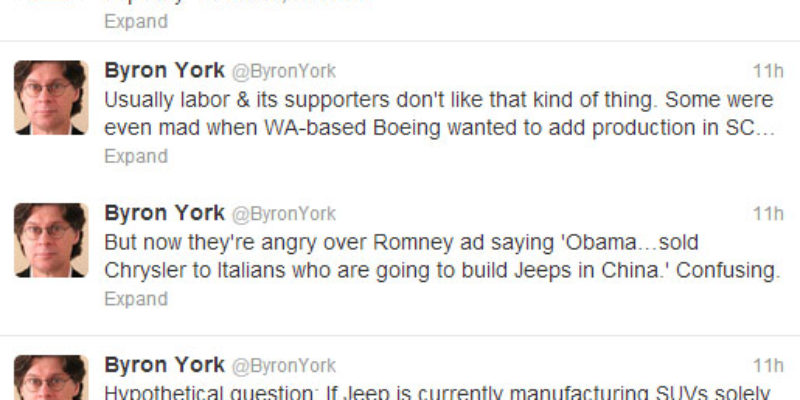 Y’all heard about how Chrysler is gonna make Jeeps in China now?

Fiat SpA (F), majority owner of Chrysler Group LLC, plans to return Jeep output to China and may eventually make all of its models in that country, according to the head of both automakers’ operations in the region.

Fiat is in “very detailed conversations” with its Chinese partner, Guangzhou Automobile Group Co. (2238), about making Jeeps in the world’s largest auto market, said Mike Manley, chief operating officer of Fiat and Chrysler in Asia. Chrysler hasn’t built Jeeps there since before Fiat took control in 2009.

“The volume opportunity for us is very significant,” Manley, who is also president of the Jeep brand, said in an interview at Chrysler’s Auburn Hills, Michigan, headquarters. “We’re reviewing the opportunities within existing capacity” as well as “should we be localizing the entire Jeep portfolio or some of the Jeep portfolio.”

So Mitt Romney comes out with this ad…

And the Lefties go absolutely kookoobananas.

They didn’t go kookoobananas when Obama ran this ad…

…even though the whole premise behind it was pretty stupid – as in, what Mitt Romney did when he was runnin’ an equity firm somehow has anything to do with what his trade policy’s gonna be as president.

Maybe he was thinkin’ that. Nobody on the Left will give him credit for thinkin’ that, but maybe he was. It’s not like he wrote anything like that in his book, or anything – right?

Naw. He just talks about stupid tax and regulatory policy for most of the book. Nothin’ to see here.

But when Romney notes that the Italians who bought Chrysler are lookin’ to expand their facilities in China so as to make Jeeps to sell in China – they’re not gonna build a factory in Chillicothe or Appleton or Peoria to do that, they’re gonna sub-contract a Chinese company to make ’em – it’s the most dishonest thing anybody’s ever said while runnin’ for office.

Romney’s new ad about Jeeps and Italy is f-you dishonest.

And more – everything Romney says in his ad is true, but it all adds up to “he’s lyin'”…

Technically, every word of this is true. Obama did force GM and Chrysler through a managed bankruptcy. Fiat did end up buying Chrysler. And Chrysler is thinking about building Jeeps in China. But remember my three-part test to judge how deceptive a statement is?

On this scale, Romney’s ad rates about 9 out of 10 on the deceptiveness scale. He’s obviously trying to imply that American jobs will be shipped overseas; stating things accurately would require wholesale revisions; and doing so would completely destroy Romney’s point. But he doesn’t care. He’s got an election to win, and if scaring Ohio autoworkers is what it takes, then that’s what it takes. It’s truly nauseating.

That last bit is from Mother Jones, who ran with that “47 percent” video a few weeks back. You might remember that video had a chunk “missing” right after the point where Romney talked about the 47 percent of the people he’ll never get to vote for him because they’re gettin’ free stuff from the government – because, y’know, maybe what came right after could have been, I dunno, some context as to why he’d say that.

Point is, they don’t really get to whine about Romney’s dishonesty. They wrote the book.

Romney says he can make it so manufacturers will want to make stuff here rather than China. Obama’s record is that manufacturers are lookin’ to make stuff in China. Obama might not be the first president where that’s true. Doesn’t matter, though, right? He hasn’t fixed it and he’s got no plan to fix it. Romney does – he wants to cut corporate taxes and he wants to blow up the regulatory system that screws over our economy so we can be more competitive with the Chinas.

Byron York pops the lefties – hard – on Twitter for this nonsense. 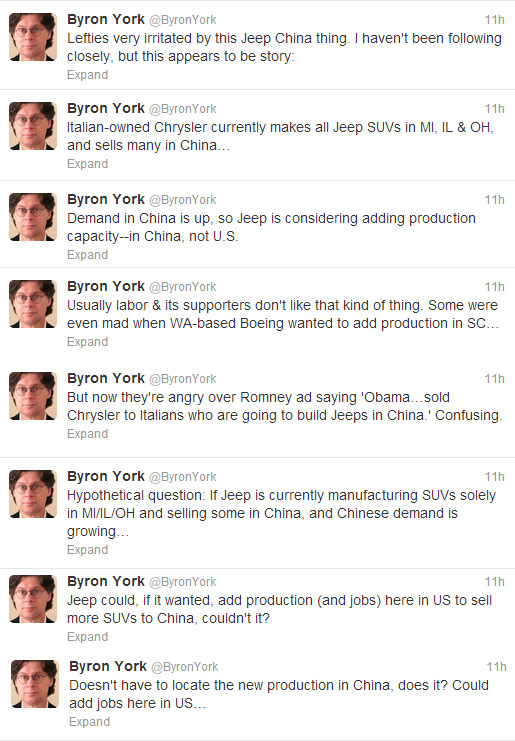 Romney just hit 50 percent in Rasmussen’s latest poll today. So it’s no surprise that the mothercluckers at Mother Jones are freakin’ out about things he says.