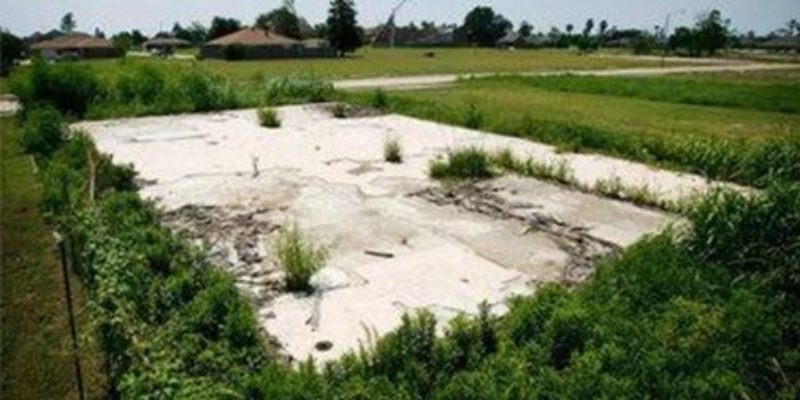 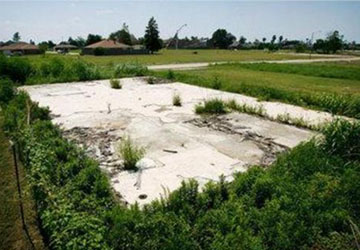 And for good reason, as it turns out. It’s been $200 million in six years down the drain and the program, which was supposed to facilitate the rehabilitation of the housing industry in New Orleans after Katrina, still hasn’t managed to unload as much as a third of the property.

Not that LLT does much of a job maintaining the properties it holds.

From the 2012 Wastebook, which finds $18 billion in low-hanging fruit which could easily be cut, LLT appears to be about to run through its funding early next year…

As recently as October 2012, a federally funded program to help facilitate the sale of nearly 9,000 homes abandoned after Hurricane Katrina was still holding over 3,000 homes.

Over $21.6 million was spent in the last year to maintain the homes and administer the program, with $5.8 million remaining. Since the program’s creation, the federal cost has been over $200 million, much of it coming through the Department of Housing and Urban Development.

The Louisiana Land Trust (LLT) was created in 2006 to help New Orleans and surrounding parishes manage thousands of derelict properties, many of which were destroyed or left in disrepair from the aftermath of Hurricane Katrina.

City and parish governments weresupposed to find buyers in the neighborhoods and through auctions. LLT has almost run out of federal funds, yet it still maintains an inventory of over 3,000 homes.

New Orleans and other parishes will have to take ownership of unsold homes.

Since its inception, LLT has used at least $86 million to perform basic maintenance for “abandoned parcels” of land, which includes lawn-cutting, trash cleaning, and pest
control.

In many cases, LLT is only maintaining an open space after demolishing existing homes that were beyond repair.

Local officials have said they are not working to sell the homes because they do not want to hurt current housing prices.

Yet, some developers have noted officials have not been acting quickly enough. “How many years does it take them to do something?” asked Donald Vallee, a New Orleans developer and board member of LLT.

Inaction has allowed blight to persist. One New Orleans local said several stolen or abandoned cars have been set on fire in these properties over the previous year. “Right now, it’s an eyesore. It’s not serving any purpose.”

Built on a poor foundation, this $200 million investment in real estate has left taxpayers with nothing but empty homes and open lots.

It gets worse. The Times-Picayune had an editorial in April about one example of the LLT and all the great work they’re doing…

After Hurricane Katrina, state officials encouraged area homeowners like Deonne McCovins to come back and rebuild their flood-damaged properties. That’s exactly what Ms. McCovins did, fixing her eastern New Orleans townhouse and moving back into it with her son a few years ago.

In return for her efforts, Ms. McCovins said she’s been living next door to an unexpected slumlord: the state of Louisiana.

In a lawsuit she filed against the Louisiana Land Trust and the New Orleans Redevelopment Authority, Ms. McCovins said the Land Trust has neglected to maintain a vacant condo next to her that was sold to the Road Home program. She said that has led to water damage in her own unit, stray animals and a steady foul odor.

The property at issue is one of 110 Road Home buyouts that are so-called common-wall units, most of them located in eastern New Orleans. Other homeowners living next to these properties could face a similar problem, because Land Trust officials said they don’t have the authority or the money to make significant repairs to the units.

After six years and the end of the financial string, the LLT is still sitting on 3,000 properties which are about to be dumped on local governments like the City of New Orleans – which has no resources to take care of them, and absolutely no concept of how to handle the situation…

Every month, LLT spends about $88 to cut the grass at each location. Other expenses range from insurance to pest control.

Visits by a reporter to neighborhoods hit the hardest by the flood found these orphaned lots are contributing to blight and the checkerboard-like rebuilding still dragging on in parts of the city.

The tour of 45 government-owned properties was focused on the Lower 9th Ward and other neighborhoods where these abandoned lots are concentrated. Overall, many of the unsold properties are in low-lying neighborhoods that suffered from blight and poverty even before Katrina.

But the idle government-owned lots weren’t confined to rundown neighborhoods. On South Galvez Street in Broadmoor, an abandoned government-owned house was the only sign of Katrina left on the block.

It gets worse, because it’s pretty obvious that the LLT couldn’t care less about unloading the properties that could be unloaded without disrupting any policy directives…

Jim Provensal, a musician living next door, said he had wanted to buy the property but the city agency in charge of selling or developing the properties, the New Orleans Redevelopment Authority, wanted $130,000 for it.

“That’s too much money!” Provensal said. “They don’t care. They know if they sell the property they won’t have a job.”

And so, the boarded-up house sits, paint peeling.

At $88 a month just to cut the grass, why isn’t a neighbor like Provensal allowed to lease-purchase the property? It’s insane to turn away ANY buyers. When they buy the property, they pay property tax to a city which desperately needs it!

“Right now nobody on those 3,000-plus properties is contributing. It’s costing the city and state government to maintain them. Police got to go out there, run kids out of there, drug-users,” said Errol Williams, the tax assessor in New Orleans. “That’s a cost to the city. If they sell one, it comes back on the tax rolls, I’m happy.”

Vallee said that he’d like to see the properties go up for auction, which of course has driven others into a case of the vapors. Auctioning off LLT properties would drive real estate prices down, they say.

So what does an abandoned, blighted property next door – or several in the neighborhood – do for real estate values?

At this point, can anybody in the Lower 9th Ward really make a case that auctioning off cleared lots – particularly when they cover entire city blocks, in some cases – would hurt real estate values?

They could give those properties away, and so long as somebody returned them to commerce it would be better than what we have now.

The LLT’s website lists 19 people as full-time employees – but of course we can’t tell you that’s how many they currently have, since despite two of the 19 being a “Public Information Coordinator” and an “IT/IS Manager” the site says that page hasn’t been updated since July 31, 2009.

You can bet that early next year, when the LLT runs out of money, you’ll see Cedric Richmond and Mary Landrieu heading up to Washington with an eye toward trying to find more federal funding to keep LLT alive and those properties off the City of New Orleans’ hands.

But Coburn is correct. It’s time to dump this program. And it’s time for those properties to go into private hands. If that means an auction and a fire sale, so be it. It’s past time to take that hit and let the market recover. If private owners are willing to pay property tax and keep up the land, so what if their purchase prices aren’t what they were before the storm?