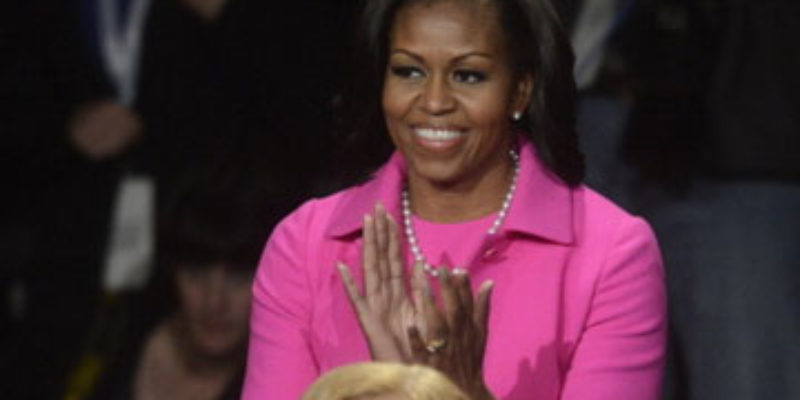 Yep. In case you didn’t know that happened, it did.

Of course, that debate was a total stacked deck. The idea that you’d find a room full of “undecided” voters in a state which hasn’t been in play since Reagan was running for re-election is laughable enough; when those “undecided” voters include the local Code Pink organizer (possibly, though not certainly) it’s even more of a joke.

Those weren’t undecided voters. Those were pissed-off, dyspeptic, cranky Democrats.

Crowley was maybe the most biased moderator we’ve ever seen in a presidential debate. She interrupted Romney 28 times. Breitbart had a rundown…

Crowley interrupted Romney 28 times. 28 times. Her desperation to keep Romney from scoring points was so patently obvious that it wasn’t really a surprise when she had her infamous moment: the moment when she interrupted and falsely claimed Romney was incorrect in accusing Obama of refusing to call the Benghazi attack an act of terror.

And even beyond the interruptions, there were numerous instances where Crowley’s obvious partisanship prompted her to treat Romney with great disrespect:

1. She wouldn’t let him respond when Obama lied about the auto industry. First she called him Mr. Romney instead of governor, then protested, “there’ll be plenty of chances here to go on, but I want to… We have all these folks.  I will let you absolutely… OK. Will – will – you certainly will have lots of time here coming up.” Romney never did get the chance to respond.

2. After the question asking whether gas prices as they stand now are the new normal, Obama got 2 chances to respond. When Romney asked for his second chance, Crowley shut him off by saying, “ … in the follow up, it doesn’t quite work like that. But I’m going to give you a chance here. I promise you, I’m going to.” She didn’t.

3. When discussing how he would deal with deductions, just as Romney was about to destroy Obama with statistics, Crowley jumped in to save her man not only by denying the value of statistics, but changing the narrative to say Romney’s numbers couldn’t possibly add up:

“And Governor, let’s – before we get into a vast array of who says – what study says what, if it shouldn’t add up. If somehow when you get in there, there isn’t enough tax revenue coming in. If somehow the numbers don’t add up, would you be willing to look again …”

4. When Romney was trying to make a point of Obama’s pension investing in China, Crowley cut him off by insinuating people were tired of him talking:

“Governor Romney, you can make it short. See all these people? They’ve been waiting for you.  Make it short.”

Then she really tried to humiliate him with this: “If I could have you sit down, Governor Romney. Thank you.” She never asked Obama to sit down.

5. The infamous incident when she interrupted Romney’s claim about Obama’s refusal to call the Benghazi murders a terror attack:

Prompted by Obama to say it a little louder, Crowley obliged:

6.  Just as egregiously, when the question was about assault weapons and Romney naturally started to discuss fast and furious, Crowley quickly shifted him away from that and turned it into an attack on Romney’s assault ban position:

“Governor, Governor, if I could, the question was about these assault weapons that once were once banned and are no longer banned. I know that you signed an assault weapons ban when you were in Massachusetts, obviously, with this question, you no longer do support that. Why is that, given the kind of violence that we see sometimes with these mass killings? Why is it that you have changed your mind?’

The fact that Obama escaped all night long by lie after lie didn’t seem to disturb Crowley in the slightest. She had her shadowy agenda, and she stuck to it fiercely. Now it is our job to throw her out into the sun where every American can see exactly how dirty she is.

The fact that given such a stacked deck Romney still managed to dust Obama on the economy and taxes, which are two of the biggest issues in the campaign, doesn’t help the president’s campaign much. Most of the talk about this debate isn’t about an Obama victory, it’s about the poor job Crowley did.

But the lesson going forward ought to be that the RNC should put a stop to these lefty moderators and their idiotic interruptions. Nobody cares about Candy Crowley or what she has to say, particularly when she can’t even get her facts straight.

Because when Obama gets nine percent more time to speak than Romney does and Romney is interrupted 28 times to Obama’s nine, that’s not a moderated debate; it’s an ambush. When the questions are all framed from a left-wing perspective, it’s an ambush.

Again, I’ll say whatever.  So what.  Now I know you are angry at how it went down like that.  How Benghazi got shoved  into the background.  Hell, did you see how Crowley totally buried any discussion of Fast and Furious?  Can’t help but laugh at how obvious it all was.

But here is some very good news.  At least regarding the spine of these Romney people.  After the debate, there isn’t complaining.  There isn’t finger pointing. There isn’t whining.  They just pick up where they left off.  Upward and onward.  So we got shoved around a bit by a bullshit debate scenario.  Lots of people watchingthat debate could see how it was manipulated against the governor.  Romney handled it about as well as he could.  Might have missed a few opportunities here and there, but overall, he did just fine.  And the campaign wasn’t rattled.  Not one bit.  That shows class.  That showsstrength.  That shows a team really in its stride as we head to the finish line.

But that toughness aside, the legacy media and its outrageous games have outlasted their usefulness. It’s time they be called out, and it’s time the market punishes such a sorry spectacle.