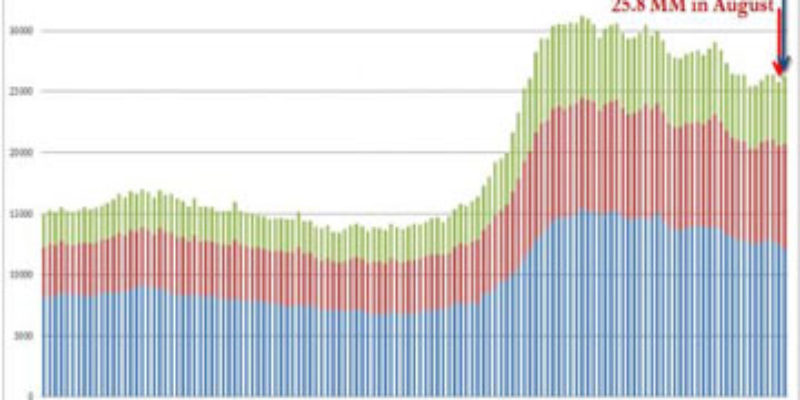 The responses to Welch’s tweet – “you’re a smart guy Jack. I hope you really don’t believe conspiracy theories like that;” “You old loser” – aside, he probably has a point.

Try to make sense of these numbers. From The Hill…

The economy added only 114,00 jobs, yet the unemployment rate still dropped from 8.1 percent to 7.8 percent.

Total employment rose by 873,000 in September, a significant jump that could help explain the drop in the unemployment rate.

The report revised figures up in July and August, and it showed more people are now entering the workforce. This is also the first report to be released since the Bureau of Labor Statistics announced it had undercounted employment for the previous year by 386,000.

The September report is the next-to-last jobless report before the presidential election and the unemployment rate is now lower than when Obama entered office. No incumbent president has won reelection with an unemployment rate above 8 percent since President Franklin Roosevelt.
The report will be welcome news for the White House and Obama’s campaign after a difficult week in which Obama was roundly thought to have been beaten in his first debate with Republican presidential nominee Mitt Romney.

The report from the Bureau of Labor Statistics revised figures for July and August to show stronger growth.

And for the first time in months, the job market showed stronger job growth as 418,000 as more people entered the workforce to look for a job.

You explain that. Just 114,000 new jobs, 418,000 entering the workforce to look for work, and yet unemployment drops. That make sense to you? It didn’t to Jack Welch.

But others had a different reaction…

“This is a really big report. This is a big report,” said Mark Zandi, chief economist for Moody’s Analytics. He noted average weekly hours worked were also higher according to the report.

At the same time, Zandi noted the monthly reports are volatile and that half of the 873,000 gain in total employment came from part-time workers. He suggested some of those gains could also be related to seasonal adjustment issues that could fall out of the data.

Zandi didn’t apparently attempt to explain how you could have a little more than half the new jobs created that you need to keep up with population growth, some 400,000 new people trying to get a job and yet a three-tenths of a percent drop in the unemployment rate.

The number of unemployed dropped 456,000 last month, while only 114,000 jobs got added.  That either means that 342,000 people left the US, or they left the work force in one way or another.  In the household survey, though, the number of people with jobs rose by 873,000 — a very strange outcome that makes it appear that more than one tweak has been done to previous data.  (The +873K is in the seasonally adjusted number, by the way.)

The household survey showed an 873,000 increase in employment, the biggest since June 1983, excluding the annual Census population adjustments. Some 582,000 Americans took part- time positions because of slack business conditions or those jobs were the only work they could find.

But at the end of the day, the U-6 unemployment rate, which includes our basic unemployment numbers as well as marginally-attached and underemployed workers, is still at 14.7 percent. And the labor participation rate is at 63.6 percent, which is just a tenth of a point off a 30-year low.

Tyler Durden at Zero Hedge comes up with some interesting information…

But what was the reason for this epic jump in Household survey jobs? Simple, and those who have read our series on America’s transition to a part-time worker society know the answer. The reason is that the number of part-time people employed for economic reasons soared by 582,000 to 8,613,000, the most since October 2011, and the largest one month jump since February 2009, when “restoring” confidence in the economy was all the rage… and just before the Fed announced the full blown QE1 in March of 2009. Odd symmetry.

And yet they’re crowing about the great jobs report numbers. At the same time the Obama campaign is flat-out calling Mitt Romney a liar.